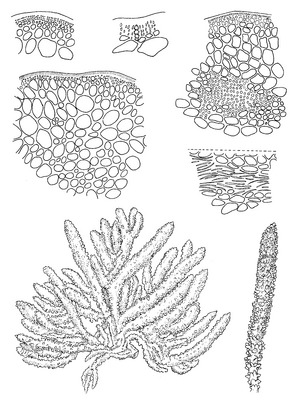 Eucheuma is distributed throughout the tropics. Originally E. denticulatum and E. serra probably only occurred in the Indian Ocean and in South-East Asia. In most recent times especially E. denticulatum has been distributed to other areas by man. E. arnoldii has been recorded in the Indo-Malayan Archipelago in Indonesia and the Philippines, also from northern Queensland to the southern Ryukyu Islands and Taiwan. Farming trials with E. denticulatum and E. serra carried out before 1984 failed, but nowadays the former species is cultured in many localities.

Species of the Eucheuma sections Eucheuma (E. denticulatum, E. serra) and Anaxiferae (E. arnoldii) are good sources of iota carrageenan. It appears that the carrageenan from E. denticulatum is the most valuable to industry, since it becomes an ideal iota carrageenan upon alkali modification. It is used in industrial food and beauty aid products, in pet foods, in granulated or hydrated gel components in various formulations, or prepared as a stew mixed with vegetables. The algae are eaten fresh or blanched in boiling water and mixed with salad garnish. In Vietnam thalli of Betaphycus Doty ex P.C. Silva, Eucheuma, and Kappaphycus are used in traditional medicine to reduce the incidence of tumors, ulcers and headaches. They are also used as manure and fertilizer.

Production and trade data on "Eucheuma" often apply to all Eucheumoid algae (thus on Betaphycus and Kappaphycus as well), to the group of carrageenan-producing seaweeds as a whole or even to all red seaweeds together. World production (wet weight) by phycoculture of all "Eucheuma" together in 1986 was 160 106 t. By 1994 this figure had been 384 980 t. Of these, Indonesia produced 77 462 t in 1986 and 115 000 t in 1994 (these data also include Gracilaria Grev. and Gelidiales) (only for "Eucheuma spinosum" = E. denticulatum). The Philippines probably produced 8173 t in 1986 and in 20 190 t in 1994. Production from natural populations of E. serra in 1984 in the Philippines was estimated to be 60 t (dry weight).

Carrageenan from E. serra has not been available for extraction and descriptive analysis. However, infrared analysis has shown spectra very similar to those of E. denticulatum, while molecular data (rbcL sequences) show differences with E. denticulatum as well as similarities with that species. Thalli of E. serra (from Japan) give high yields of lectins, identified as at least two different isolectins. Their quantities greatly exceed the yields from other macroalgae or other marine organisms.

The taxonomy of Eucheumoid algae has recently been reviewed. The new genera Betaphycus Doty ex P.C. Silva, in which several species of the section Gelatiliforma Doty & Norris are included, and Kappaphycus Doty, which was the Eucheuma section Cottoniformia Doty & Norris, have been separated from Eucheuma proper. Main characteristics used to distinguish the different species and genera of the Eucheumoids are the nature of the undamaged apical segment, the location of the cystocarp, the presence or absence of an axial core and the nature of the gel. Of the species that have remained in Eucheuma, E. arnoldii, which belongs to the Eucheuma section Anaxiferae Weber Bosse, has cylindrical branches producing compound spines arranged in whorls. Branches do not possess a cylindrical hyphal or rhizoidal core, cystocarps are borne on the main axes and the principal wall component is iota carrageenan. In E. denticulatum, which together with E. serra, belongs to the section Eucheuma, branches are cylindrical and spines are simple, regularly arranged in pairs or may form whorls. Cross-section of a branch shows a cylindrical axial core consisting of rhizoids, the cystocarps are borne on spinose laterals and the main polysaccharide component of the walls is iota carrageenan. The morphology of the Eucheuma/Betaphycus/Kappaphycus clade in a phylogenetic study inferred from molecular data (rbcL sequences) is well supported. Although three of the four Doty & Norris sections (and thus also the separate new genera) receive strong support, the remaining species within the genus Eucheuma do not form a natural group, nor does the section Eucheuma itself. Thus further taxonomic research is needed to elucidate the phylogeny of this group of carrageenophytes.

The use of the name Eucheuma serra has given rise to many problems. The type material clearly belongs to a genuine Eucheuma sp., containing iota carrageenan. However, it has been identified as "Eucheuma gelatinae" (= Betaphycus gelatinus), which contains beta carrageenan, and also as "Eucheuma edule", which might belong to the genus Kappaphycus.

E. arnoldii is commonly found growing on dead coral fragments on platforms, solid coral pavements, coral rubble, algal limestone and living coral. It is generally associated with branching coral colonies and is quite limited in its vertical distribution: at low intertidal to shallow subtidal zones about 1.25 m above the lowest tide level to about 1.2 m below mean low water. It is usually absent in habitats where conditions permit sand deposition. Its habitat is generally influenced by swift current and silt-free water and the alga is present under these conditions throughout the year.

Because of its sprawling and closely adhering habit it is often difficult to detect specimens of E. serra, especially when they grow mixed with turf-forming algae. It grows on rocks and corals and occurs in intertidal pools, where it can even be exposed to the air at low tide, but also at depths up to 20 m. It is especially found in locations with clear water and heavy surf or on walls of channels with rather strong currents.

One of the major diseases in cultivated Eucheuma is "ice-ice" disease.

Carrageenan yield in cystocarpic material of E. arnoldii is 53% and in tetrasporic material 47%.

On average, the world market for carrageenans has maintained a steady annual growth of 10%. In the Philippines, however, the annual growth during the period 1993-1997 has ranged between 20-30%. This high growth rate is reflected in the demand for an additional 10 000 t of dried seaweeds by the carrageenan processors. The continuing discovery of new industrial uses of carrageenan will lead to an increasing demand for supplies of raw material. Thus the prospects for farming carrageenophytes are bright. E. arnoldii, although presently not used in any form, is readily farmable in shallow, near-surface habitats in the vicinity of coral growth.