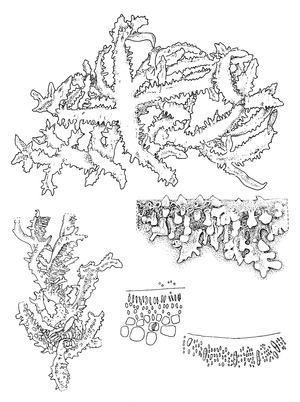 B. gelatinus is limited to the following tropical and subtropical regions in eastern Asia: eastern Indonesia, the Philippines, Vietnam, southern China and southern Japan.

B. gelatinus has long been collected in Hainan (China) and used as a gelatinous substance in food and for wall sizing. Around 1930 the agar factory in Ningbo (Zhejiang, China) was already using this seaweed as a raw material in the manufacture of shred agar. At that time 40% of the Betaphycus (then as Eucheuma) was mixed with 60% of the agarophyte Gelidium amansii (J.V. Lamour.) J.V. Lamour. In recent years in China, B. gelatinus has also been used in salted salad, replacing Eucheuma denticulatum (Burm.f.) Collins & Herv. Now it is especially used to produce beta carrageenan, which is mainly applied in food. In Vietnam this alga is used for making jellies, cakes, and sweet soup. In Indonesia (Lesser Sunda Islands) it is used to prepare vegetable soup (with coconut milk), and it is also applied as a vermifuge. In Chinese herbal medicine, however, B. gelatinus is not used as a vermifuge but for the treatment of goitre, scrofula, cough, tonsillitis, asthma, stomach ailments, haemorrhoids and anal fistulas.

An annual amount of 300-400 t (dry weight) of B. gelatinus is produced by cultivation from a specially protected area of about 250 ha in China. This quantity was valued at US$ 450 000 in 1981. Vietnam produces 10 t dry weight of the alga. These amounts are probably entirely consumed in China and Vietnam. Production by cultivation is very limited due to the limited occurrence of coral reefs in Hainan (China). In 1984 an additional 100 t (dry weight) was marketed from wild crops in China.

The thick cell walls of B. gelatinus are composed of D-galatan carrageenans, which are, according to some reports, principally of the beta type mixed with small quantities of the gamma and kappa types. Beta carrageenan, which lacks sulphate groups, is relatively non-ionic and quite stiff. It is used mainly in the food industry, in the making of soft sweets with a jam centre, and canned food. Other reports, however, suggest that only low percentages (6-7%) of beta carrageenan occur in B. gelatinus, and much higher percentages of kappa carrageenan. It is probable, however, that in these cases the studied material did not belong to B. gelatinus, but in fact to B. philippinensis Doty. This is a recently described species, and is the type species of the genus Betaphycus Doty ex P.C. Silva. Gel produced by (Philippine) "B. gelatinus" has characteristics which are similar to furcellaran, the carrageenan found in the European red algal genus Furcellaria Grev. In the trade B. gelatinus is often confused with and called "serra". This results in further considerable confusion, because genuine Eucheuma serra (J. Agardh) J. Agardh produces iota carrageenan and certainly not beta and/or kappa carrageenan.

In culture, after broadcasting, the "seed" thalli of B. gelatinus will develop a holdfast within a week, and fix themselves firmly on the coral reef. Under favourable conditions, in cultures in bays in Hainan (China), the Betaphycus plants may increase their weight by a factor of 5-6 in a single year, which means they can have achieved a twentyfold increase over two years.

B. gelatinus was originally included in Eucheuma J. Agardh section Gelatiforma Doty & J.N. Norris. The description of the type species of the genus Betaphycus (B. philippinensis) includes some suggestions that it contains material originally described as "Eucheuma gelatinus" from the Philippines, although its synonymy is not officially indicated. B. philippinensis has only been recorded so far from a 60 km stretch of coast near Bulusan, eastern Sorsogon Province (the Philippines) where it was collected in October and November 1987. This nomenclatural uncertainty may have resulted in different records for carrageenan types isolated from B. gelatinus. On the basis of data on carrageenan types of other taxa that were originally considered to belong to Eucheuma section Gelatiforma, it is clear that not all these species can be included in the new genus Betaphycus.

B. gelatinus is generally found growing in the intertidal zone, firmly attached to rocky or corally substrate at reef margins exposed to strong wave action or current. It usually forms a belt parallel to the reef margin at 0.0-0.3 m above average low-tide level, but in culture grows much better at depths of 1-3 m.

B. gelatinus grows luxuriantly in the sea at 1-3 m depth in some bays in Hainan (China). It was first cultivated by sending divers to insert cuttings in the sublittoral reefs. In 1974 new cultivation methods were devised, which are still in use. B. gelatinus is farmed by means of vegetative multiplication. "Seed" thalli should be leathery and without epiphytes. Thalli are divided into branch systems, and 1 kg of thalli may produce about 40 such systems. They are each tied to a branch of dead coral by means of rubber rings and broadcasted on a selected sea bottom at a density of about 75 000 lots per ha. Divers are then sent down to arrange them in order.

Healthy parts of harvested thalli of B. gelatinus are reserved as "seed" stock for the next crop. The "seed" thallus fragments are left to grow in the subtidal region.

Harvesting of B. gelatinus takes place after 1-2 years of growth. Since it grows best on 1-3 m deep sea bottoms, divers must be sent down for harvesting. Each diver can collect 150-500 kg (wet weight) of the seaweed per day in floating bamboo baskets.

In southern China beta carrageenan is extracted from B. gelatinus using a relatively simple technique. The dried algal material is modified with either KC1 or NaOH prior to cooking. It is cooked for 1 h and then passed through a drum filter with a fine nylon screen. The extract is hardened in square trays of 1 m × 1 m. The gel is cut into strips which are frozen and then thawed. Then the strips are sun-dried on bamboo mats to be ready for sale.

If more beta type carrageenan were available, it would certainly have many applications. Because of taxonomic uncertainties, it is not yet certain whether South-East Asian Betaphycus material can be used in the same way as in China. Thus the status of the Indonesian, Philippine and Vietnamese material should be cleared without too much delay. It will then be possible to assess whether commercial cultivation of these algae outside China is feasible and profitable.