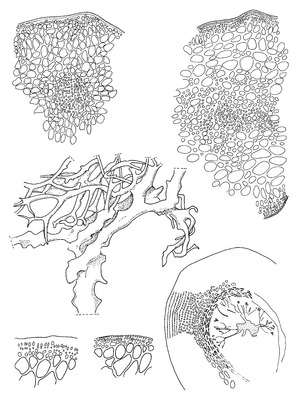 K. striatus originates from the tropical waters of the Indo-Pacific, and is found in Kenya, Tanzania, Madagascar and India in the Indian Ocean to Taiwan, the Ryukyu Islands and the Federal States of Micronesia (Belau and Pohnpei). In South-East Asia it occurs in Singapore, Indonesia, Malaysia (eastern Sabah), the Philippines and Papua New Guinea.

Fresh K. striatus may be consumed as a vegetable and a sweet dessert. The alga produces kappa carrageenan which can be used as a gelling agent, thickener and stabilizer. Applications are mostly in the food, cosmetic and pharmaceutical industries. Most probably a gel prepared from this alga was used by Hesse (1939) to prepare a stable solid medium for microbiology. He applied the Malay name "agar agar" for this gel, but the medium probably consisted of kappa carrageenan, which forms a rigid gel that will retain its form without support. The term "agar", however, in modern phycocolloid nomenclature is applied to a different substance from different algae. Since 1980 the most commonly cultivated "Elkhorn variety" of K. striatus has been replaced by the much faster growing K. alvarezii (Doty) Doty ex P.C. Silva.

In eastern Indonesia, harvesting of natural stock of K. striatus can produce 35-300 t dry material per year. An intensive seaweed culture may produce 4-6 t/ha per month (dry weight). In international trade, K. striatus contributes a much smaller amount to the world market of kappa carrageenan-producing algae than K. alvarezii .

In eastern Indonesia, the natural stock of K. striatus appears at the end of the dry season (June-July), and harvesting starts from early October to early December. A daily growth rate of 4-6% is obtained when K. striatus is cultivated with floating bamboo rafts and plants can be harvested about 45 days after planting. In other circumstances growth rates of 1.5-5.5%/d are recorded.

The status of K. alvarezii as a species separate from K. striatus (and K. inermis (F. Schmitz) Doty ex H.D. Nguyen & Q.N. Huynh) has been challenged on the basis of tetraspore progeny studies. It is suggested that the presence of both dichotomous and decumbent plants in the tetraspore progeny of K. alvarezii may represent the segregation of forms similar to ancestral parent plants, putatively of the very variable species K. striatus. Nor is it certain whether K. inermis and K. striatus really are species that differ from one another.

K. striatus inhabits the lower eulittoral to sublittoral zones with sandy hard bottom substrates. The preferred conditions are clear water and rather fast currents. It is very often found in the lower zone of exposed seagrass meadows. Preferred salinity is above 32‰ and day temperature 25-30 °C. Freshwater inflow and rain water can seriously interfere with the growth of this alga.

In cultivation, vegetative thallus propagation of K. striatus is a rapid and economic way to produce large amounts of algal biomass. For this the thalli must be healthy, not damaged by herbivory, and not in the reproductive phase. Usually 100-150 g of young thalli is tied together in each cluster or bundle.

Techniques applied for commercial cultivation of K. striatum are very similar to those of K. alvarezii. Recently, especially the raft method has been applied.

"Ice-ice" is a serious disease in cultivated K. striatus. The most common pests are herbivorous fish, which can ruin this algal culture, while invertebrates usually cause insignificant damage.

Methods used for harvesting K. striatus are very similar to those applied for K. alvarezii.

Clean, dried K. striatus produces 30-88% of kappa carrageenan, depending on the age of the plant. Maximum carrageenan content is achieved at 14-21 days, or a week after its exponential growth phase. However, at that age the biomass is not yet suitable for harvest.

The post-harvest handling of K. striatus is similar to that of K. alvarezii.

Although the demand in regional and international markets for kappa carrageenan-bearing algae is high, it is not anticipated that K. striatus will regain its once important role.