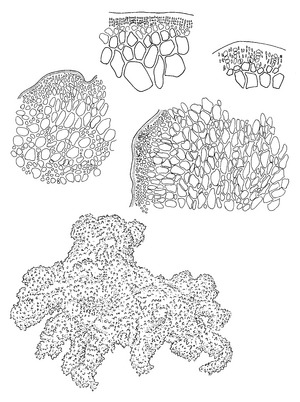 Originally, Kappaphycus only occurred in the Indian Ocean (Kenya, Tanzania, Madagascar, as well as on some small islands in the central part of that ocean), in South-East Asia and in Japan. Recently several Kappaphycus spp. have been distributed by humans to many other regions, including the Caribbean for cultivation trials. K. inermis was described from East Africa (Tanzania) and has recently been found in Vietnam.

Kappaphycus seaweeds are generally used as a source of kappa carrageenan as indicated under K. alvarezii.

In the early 1970s these algae were known as Eucheuma cottonii (usually shortened to "cottonii" by farmers and traders) because it was a member of the Eucheumoid algae producing "cottonii-like" carrageenan. The genuine Kappaphycus cottonii was always relatively rare in commercial shipments of wild seaweed and has never been farmed. In the early stages of "cottonii" farming, most of the material produced was what would be identified as K. striatus, which was used until better growing cultivars of Kappaphycus were generally adopted for cultivation.

The status of K. alvarezii as a species separate from K. striatus (and K. inermis) has been challenged on the basis of tetraspore progeny studies. It is suggested that the presence of both dichotomous and decumbent plants in the tetraspore progeny of K. alvarezii may represent the segregation of forms similar to ancestral parent plants, putatively of the very variable species K. striatus. It is not certain whether K. inermis and K. striatus are really species that differ from one another.

The genera Betaphycus Doty ex P.C. Silva and Kappaphycus have recently been separated from the broad and variable complex genus Eucheuma J. Agardh. The species of these new genera were previously separated within sections in Eucheuma. In the circumscription of Eucheuma section Cottoniformis Doty & J.N. Norris (1985), Eucheuma cottonii is excluded. It is, however, clearly included in the circumscription of Kappaphycus Doty (1988).

Kappaphycus spp. are tropical seaweeds. They occur usually on rocks and corals in clear-water areas. K. cottonii grows especially on the reef edge, where it is exposed to very strong wave action. Most species are stenohaline.

Only K. alvarezii and small amounts of K. striatus are used in phycoculture.

The most persistent disease problem in Kappaphycus is "ice-ice". It occurs almost exclusively in phycoculture under unfavourable ecological conditions.

In natural Kappaphycus populations harvesting is by hand-collecting or by collecting specimens which have drifted onto beaches.

Kappaphycus is usually sun-dried after being collected.

If disease problems in K. alvarezii persist and/or become even more severe, other Kappaphycus spp. might become more interesting for phycoculture.