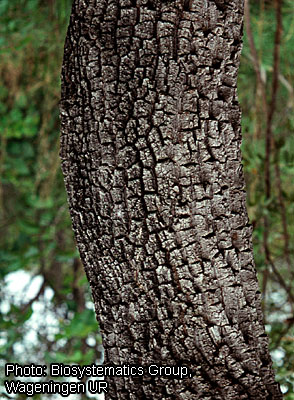 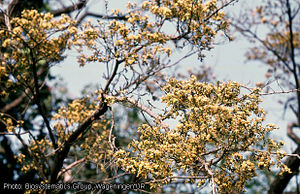 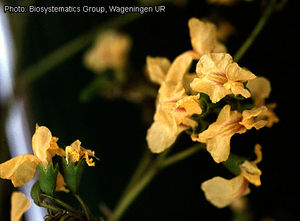 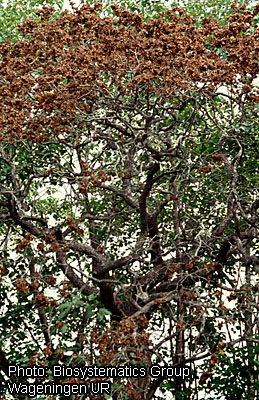 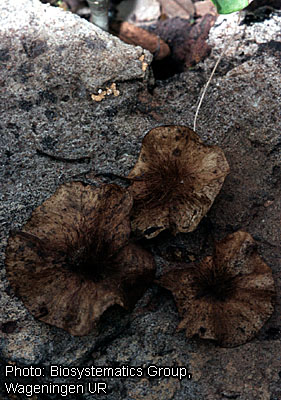 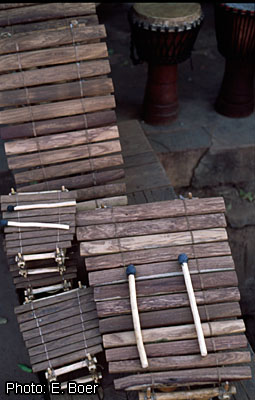 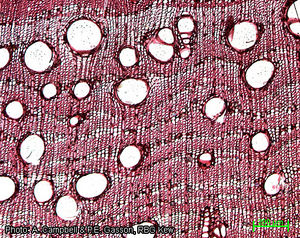 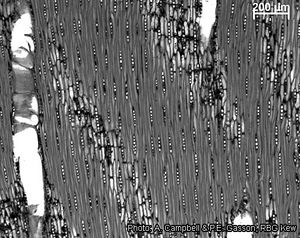 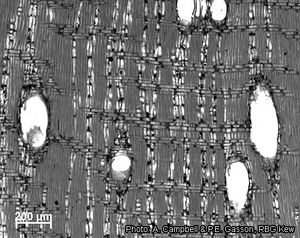 Pterocarpus erinaceus is widespread in the savanna zone from Senegal and Gambia to Chad and the Central African Republic.

The wood is highly valued for furniture and cabinet work, but is also used for heavy construction including waterworks, parquet flooring, stairs, implements, turning, sculpturing and sliced veneer. It is also suitable for joinery, interior trim, mortars, pestles, house posts, mine props, ship and boat building, vehicle bodies, sporting goods, toys, novelties, musical instruments (e.g. balafons) and precision equipment. The roots are made into bows. The wood is suitable for fuel and charcoal production.

The heartwood is a source of a red dye, which is used for dying cloth, the body or hair. The bark is occasionally used for tanning. The reddish bark exudate (‘kino’) is beaten onto cloth with a mallet to give it a glaze. Kino is commonly used in traditional medicine, internally to treat diarrhoea including dysentery, fever, gonorrhoea and intestinal worm infections, and externally to treat eye complaints, ulcers and sores. Until the middle of the 20th Century, kino was also used in North America and Europe against chronic diarrhoea. Decoctions or infusions of bark or roots serve for treating bronchial infections, toothache, dysentery, menstruation complaints, anaemia, gonorrhoea, post-partum haemorrhage, ringworm infections, leprosy, wounds, tumours and ulcers, and as an anti-emetic, purgative and tonic. Root preparations are administered as an enema to treat venereal diseases. Leaf decoctions are applied to treat fever, syphilis and are used as an aphrodisiac and insect repellent. Leafy branches are browsed by livestock, and are especially important towards the end of the dry season when not much else is available. Livestock keepers rely heavily on Pterocarpus erinaceus trees in the woodlands of the Sudanian zone.

There appears to be no significant international trade for Pterocarpus erinaceus timber, although it is important in local markets. It is harvested mainly by individual artisans, but in some areas small-scale timber merchants also harvest and sell the timber. Locally, it is one of the major timbers for furniture and construction, e.g. in Gambia. In the dry season Pterocarpus erinaceus fodder is locally an important commodity. In 1990, over 1400 t of fresh foliage, of which 78% came from Pterocarpus erinaceus, were sold in Bamako (Mali) as feed for small ruminants. Vendors bring loads of about 75 kg on bikes into markets in Bamako from a distance of up to 50 km and make a revenue of about US$ 6–7/day from this activity.

The heartwood is yellowish brown to reddish brown, often with purplish brown streaks, and distinctly demarcated from the 2–5(–8) cm thick, yellowish or pale cream-coloured sapwood. The grain is straight to interlocked, texture fine to moderately coarse. Fresh wood has an unpleasant smell.

The wood is rather difficult to saw and work, requiring considerable power; stellite-tipped sawteeth are recommended. It finishes well, but picking up may occur in planing due to interlocked grain. The wood holds nails and screws well, but pre-boring is needed because it is brittle. The gluing properties are often poor because of the presence of exudates in the wood, but the wood readily accepts stains and polishes well. The wood turns well, and the bending properties are moderate. It is durable, being resistant to fungi, dry-wood borers and termites; it is also resistant to freshwater organisms. The wood is not permeable to preservatives. The energy value of the wood is about 21,000 kJ/kg.

The bark exudate quickly hardens upon exposure. It contains 30–80% kinotannic acid, which is a strong astringent. Bark extracts showed in-vitro antibacterial and antifungal activities against several human pathogens. In tests they blocked the ovulation and oestrus cycle of female rats through antigonadotropic activity. Moderate in-vitro antimalarial activity was also demonstrated against strains of Plasmodium falciparum. The effectivity of the bark as a wound-healing agent was confirmed in tests, and the activity may be explained by the presence of phenolic compounds that have an effect on the complement system (part of the immune system). The bark showed significant antioxidant activity. Water and methanol extracts showed in-vitro inhibitory activities against Mycobacterium smegmatis and Mycobacterium tuberculosis, the latter being a causative agent of tuberculosis.

The crude protein content (dry matter basis) decreases from 13.4–16.9% in young leaves to 10.3% in dry leaves, and digestible nitrogen from 10.7% to 5.8%. The feed value is 0.79, 0.74 and 0.51 forage unit/kg dry matter for young, green and dry leaves, respectively. In tests with rabbits, the leaves showed good digestibility and no adverse effects on health.

Pterocarpus is a pantropical genus belonging to the tribe Dalbergieae; it comprises approximately 30 species of which about 15 occur in Africa, 10 in America and 5 in Asia.

Seedlings develop a long taproot. They grow slowly. In Mali seedlings were only up to 15 cm tall after one year and up to 42 cm after two years. However, under better conditions a height of up to 25 cm 21 weeks after germination has been reported and up to 100 cm after 2 years. In northern Côte d’Ivoire planted seedlings had an average height of 9 cm after 3 months, 50 cm after 18 months, 2.8 m after 2.5 years, 4.4 m after 4.5 years and 5.5 m after 5.5 years. The fastest growing tree was 10 m tall after 5.5 years. Coppiced trees may grow more than 1 m/year. Pterocarpus erinaceus is deciduous, becoming leafless towards the end of the dry season. The trees flower when leafless, usually in December–February(–April), before developing new leaves, but sometimes inflorescences develop together with young leaves. The flowers are much visited by bees, which are probably responsible for pollination. The tree may produce so many fruits that when the fruits are green it looks as if the tree is covered with leaves. Young leaves normally develop after the fruits have ripened and have become brown. Natural regeneration is often abundant and the species may be quite invasive if protected from grazing for some years. The roots have nodules containing nitrogen-fixing bacteria. However, Pterocarpus erinaceus has low nitrogen-fixation potential in comparison with several other leguminous trees.

Pterocarpus erinaceus occurs in semi-arid to sub-humid tree savanna up to 600 (–1200) m altitude, in regions with 600–1200(–1600) mm annual rainfall, a long dry season (up to 9 months) and a mean annual temperature of 15–32°C. It can be found on all soil types, but prefers light to medium, free-draining, acid to neutral soils. It can survive annual bush fires.

The weight of 1000 seeds is about 50 g. The germination rate of untreated seed is about 50%. Soaking in water for 12–24 hours and treatment with sulphuric acid for 30–60 minutes improve germination, which starts 6–10 days after sowing, with a germination rate of over 70%. A germination rate of 100% was achieved using mechanical scarification, sowing in 1% agar, incubation at 21°C and a 12-hour photoperiod. Optimal germination temperature is 25–35°C. Seeds can be sown in pots or in nursery beds at a spacing of about 20 cm × 30 cm. Seedlings can be planted out from pots or as bare-root plants, either as stumps or as entire seedlings. The survival rate is generally high when the seedlings are protected from livestock and wild herbivores. Suckers are developed regularly and can be used for vegetative propagation. Propagation by cuttings has also been successful. Recommended spacing is 3–5 m × 3–5 m in timber plantations and 1 m × 2 m in plantations for fodder production.

Pterocarpus erinaceus trees can be coppiced, and leaves from regrowth after coppicing are higher in nutritive value for livestock than mature leaves. It is therefore recommended that the tree be topped before the onset of the dry season. Trees recover quickly from pollarding and coppicing. Young plantations should be protected from browsing until 5 years old, requiring fencing.

The fungus Phyllachora pterocarpi has been reported as a pathogen, producing dark spots on leaves; it spreads by air dispersal of ascospores. Seedlings are often severely attacked by rodents and crickets.

Pterocarpus erinaceus is widespread and occurs abundantly in many parts of its range, and does not appear to be liable to genetic erosion. Overbrowsing by livestock and overexploitation by collecting fodder material in the dry season have been recorded for several regions, e.g. Mali and Burkina Faso, which locally puts high pressure on the populations of Pterocarpus erinaceus. Locally, cutting for the valuable wood seems to be on an unsustainable basis, e.g. in Gambia. Harvesting timber or fodder from Pterocarpus erinaceus is illegal in several countries, including Mali. In trials strong growth differences have been observed between provenances.

As a true multipurpose tree, Pterocarpus erinaceus is of great interest for agroforestry systems, not only because of its valuable products such as wood, forage, fuel and medicine, but also because it may improve soil fertility. Increased marketing as a timber species could easily be in conflict with its importance as a source of fodder and for soil improvement, uses that are crucial to the livelihoods of the herders and farmers in the Sahel region. Pterocarpus erinaceus has interesting pharmacological activities, including antimicrobial, wound-healing and antioxidant effects, which deserve more research attention. It has considerable potential as ornamental tree. As large growth differences between provenances have been observed, selection and breeding may be useful.