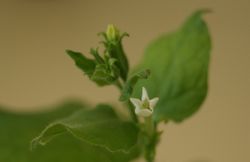 This plant indigenous of Australia has long been only a stimulant used by local people. It has become a major model plant for research, and a novel industrial plant. Sequencing its genome will help comparative genomics with such crops as tomato and potato.