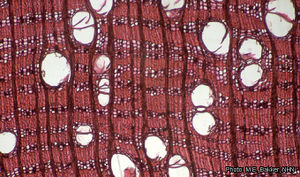 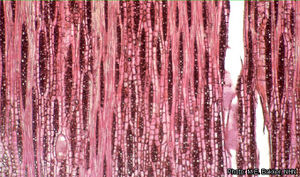 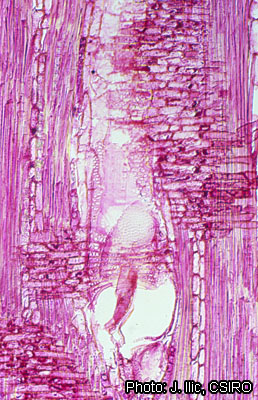 Irvingia gabonensis is indigenous to the humid forest zone of the Gulf of Guinea from western Nigeria east to the Central African Republic, and south to Cabinda (Angola) and the westernmost part of DR Congo; it also occurs in São Tomé et Príncipe. It is planted in parts of this area, e.g. in south-western Nigeria and southern Cameroon, and also in Côte d’Ivoire, Ghana, Togo and Benin.

Kernels of the fruits of Irvingia gabonensis, called ‘ugiri’ in Igbo or ‘apon’ in Yoruba, yield an important food additive popular in West and Central Africa. They are processed by grinding and crushing, and then used to thicken soups and stews. The kernels are also made into a cake called ‘dika bread’ or ‘odika bread’ for year-round preservation and easy use. An edible oil is extracted from the seed that is used in cooking. As it is solid at ambient temperatures it has been used as a substitute for cocoa butter, and for soap-making. The presscake is suitable for thickening soup and is a good cattle feed. Unlike the fruit pulp of most other Irvingia spp. which is bitter, the pulp of the fruit of Irvingia gabonensis is juicy and sweet and eaten fresh. It can be used for the preparation of juice, jelly, jam and wine. The pulp has also been used to prepare a black dye for cloth.

Irvingia gabonensis is commonly preserved on farms to provide shade for crops, especially cocoa and coffee. The medicinal uses of Irvingia spp. are many, but it is difficult to assign them to individual species. Preparations from the bark are rubbed on to the body to relieve pains and are applied to sores and wounds and against toothache. They are also taken to treat diarrhoea. Igbo people use a leaf extract as a febrifuge. In Cameroon preparations mainly from the bark are used to treat hernia and yellow fever and as an antidote for poisoning. Kernels are used to treat diabetes. The wood, called ‘andok’ in Cameroon, is used locally for heavy construction work and for making ships’ decks, paving blocks and planking. Young trees are used for making poles and stakes, while branches are made into walking sticks or thatched roof supports. Dead branches are used as firewood.

Irvingia gabonensis is cultivated for commercial production in southern Nigeria and southern Cameroon. Fruit is only traded locally, but kernels are widely and extensively traded domestically, from the forest zone to the savanna zone and between countries in West and Central Africa. They are exported to Europe. Cameroon is probably the main exporter. The combined export trade of the kernels of Irvingia gabonensis and Irvingia wombolu Vermoesen from Cameroon has been valued at US$ 260,000 per year for 107 t. The fruit kernels are very common throughout the year in the markets of Libreville (Gabon). They originate from the local forest, but are also commonly imported from Cameroon and Equatorial Guinea. The wood of Irvingia is mainly used locally and is rarely exported.

Heartwood of Irvingia gabonensis and Irvingia wombolu is pale greenish brown or orange-yellow fading to greyish brown; sapwood is lighter, but not always clearly differentiated. The grain is straight or interlocked, texture fine to medium.

The wood is fairly heavy. The density is 930–1002 kg/m3 at 12% moisture content. The shrinkage rates are high, from green to oven dry 6.5–7.1% radial and 10.2–12.6% tangential. To avoid end surface checking, logs should be converted soon after felling, preferably by quarter-sawing.

At 12% moisture content, the modulus of rupture is 163–217 N/mm2, modulus of elasticity 18,700–21,700 N/mm2, compression parallel to grain 69–79 N/mm2, Chalais-Meudon side hardness 5.7–12.7, shear 15 N/mm2, cleavage 19–34 N/mm. The timber is moderately difficult to saw or plane and tools should be kept sharp. It dresses to a smooth finish and glues well. Nailing is difficult. The timber is durable and fairly resistant to termites, but susceptible to powder-post beetles and marine borers. The heartwood is untreatable, the sapwood resistant to preservatives.

The stem bark was found to have analgesic effects in tests with mice. Aqueous extracts of the leaves have caused a reduction in intestinal motility in test animals. Addition of a supplement of 4 g/day of ‘dika bread’ to the diet of type-2 diabetes patients reduced plasma glucose and lipid levels.

The kernels of all Irvingia species are used as a thickener for soups and stews. Groundnuts and okra are used similarly in West and Central Africa.

Irvingia excelsa Mildbr. is a large rainforest tree occurring from Cameroon to Gabon and DR Congo. The pulp of its fruit is hard, stiff-fibrous and inedible. The seeds are eaten like those of other Irvingia spp.

Irvingia robur Mildbr., a large tree with a disjunct distribution, occurs from Sierra Leone to Côte d’Ivoire and from Nigeria to DR Congo. It fruits and flowers year-round, but with a flowering peak in the dry season and fruiting peak in the rainy season. It occurs in forest on dry land.

Irvingia smithii Hook.f. occurs in forest and savanna from Nigeria to Sudan and throughout DR Congo to Angola. Its fresh fruits are sucked for their sweet pulp. The oil-rich seeds are eaten raw in the Central African Republic and DR Congo. The wood is locally used as timber. A decoction of the bark is taken against dysentery. Irvingia smithii always grows near water. The fresh fruits contain characteristic air bubbles and float.

Growth in young plants is very slow; later it becomes moderately fast. In Onne (Nigeria), on an acid Ultisol and with an annual rainfall of 2400 mm, 12-year-old trees had reached a height of 12 m and a stem diameter (1.3 m above the ground) of 17 cm. In Ibadan (Nigeria), on an Alfisol and with an annual rainfall of 1280 mm, they reached a height of 8 m and a stem diameter of 12 cm. The flowering season is not clearly defined, but flowering occurs mainly in the late dry season or early rainy season, in April in south-western Cameroon and in September–October in Gabon. Fruits are mature about 4 months later. In cultivation in Côte d’Ivoire some trees flower year-round. The flowers are pollinated by a variety of insects and self-pollination is rare. In the wild trees start fruiting when 10–15 years old, but planted trees may first fruit after 4 years. After the fruits fall the pulp rots away quickly. Successful germination in elephant dung is common. The thickness of the kernel wall varies from strong and thick to thin and brittle. Trees have been identified in which kernels split open spontaneously. Seed is recalcitrant.

Irvingia gabonensis is mainly propagated by seed. When farmers plant it, they choose seed from selected trees on their own farm, from neighbours, or from the market. Criteria for selection are large fruit size, good taste, high yield, regular production (every year), early maturity, good sliminess and drawability of kernels and easy kernel extraction. Transplanting of wildlings and retainment and protection of wildlings when clearing land for agriculture are common. Germination of Irvingia gabonensis seeds takes more than 14 days and they should first be extracted from the fruit and dried for at least 2 days. A germination rate of 80% can be reached in this way. Methods of vegetative propagation through rooting of leafy stem cuttings under mist have been developed, and micropropagation, grafting and marcotting experiments are in progress. Preliminary results show that plants from bush mango marcotts can fruit 2–2.5 years after transplanting.

Although in most areas Irvingia gabonensis occurs in wild stands or is retained in plantations of cocoa, coffee or annual food crops or in home gardens, it is commonly planted in some regions. Management tasks mostly include pruning, harvesting (gathering and picking) and fertilization.

No diseases or pest of Irvingia gabonensis trees have been recorded. Seeds are infested by larvae of the merchant grain beetle (Oryzaephilus mercator). Eggs are laid between the testa and cotyledons of the seed or in cracks in the cotyledons. Preventing cracks helps to prevent infestation.

Irvingia gabonensis fruits are mostly gathered from the ground around each tree, or harvested by climbing when the tree is not too tall. The next step consists of extracting kernels from seed, which is split in halves with a cutlass, and the kernel is removed with the help of a knife. The kernels are then dried in the sun or on bamboo drying racks over the fireplace in the kitchen.

The preparation of ‘dika bread’ consists of drying, roasting and grinding or pounding the kernels. The paste obtained is put in a container or ‘cake tin’ and left to cool for a few hours. Once solid, the cake is removed from the container and is ready for use. If well dried, it can be stored for more than a year. Sometimes women place a tin below the grid on which the dika cake is stored, to collect the oil that drips from it. In Gabon ‘dika bread’ is marketed in cakes of 100–5000 g. Oil is extracted by boiling the ground kernels and scooping off the oil.

Irvingia gabonensis is fairly widespread. It does not seem to be in danger of genetic erosion. It is classified in the IUCN Red List as a lower risk species, but being close to the qualification ‘vulnerable’

Assessment of the variation in tree characters among planted trees in south-western Cameroon indicates that farmers have traditionally selected for large fruit and kernel size and easy extractability. ICRAF has started a systematic programme of domestication of Irvingia gabonensis. This programme utilizes the variability by selecting trees with desirable traits and propagating them, while keeping a broad genetic base. A clonal approach aimed at cultivar development has been adopted. An assessment of the variability in fruits and kernel traits was made and trees were selected on the basis of desired fruit characteristics. Studies are in progress for the development of methods of marcotting and grafting Irvingia gabonensis to capture desired traits in domesticating this species.

Kernels of Irvingia gabonensis are widely traded domestically and between countries in West and Central Africa, indicating that demand is likely to increase. Domestication of this species offers great opportunity for the sustainability of production. The development of methods of transformation and preservation of the product will further add value and expand its market.