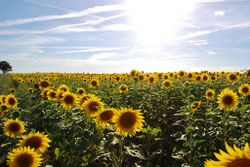 A striking feature of sunflowers is that all flowering heads seem to point eastwards. Before flower opening, the young plant is facing the East in the early morning, and follows the sun during the day. At night, it comes back to its original position. But when flowers open, they stop eastwards.

F1 hybrids are usually grown, among which all individuals are of the same height, with a single large flower head. The presence of isolated, taller, branched individuals with small flower heads shows that the seed lot contains impurities. If these individuals are numerous, this means that the farmer used his own seeds, and that we are, thus, cultivating the heterogeneous F2 generation.

Sunflowers were domesticated by Native Americans in the Northeastern United States. These consumed fried or pounded seed, turning them into a paste. This paste had a cosmetic use, or was mixed with corn flour to make cakes. But they didn't extract the oil.

The plant was cultivated as isolated individuals in or near cornfields. Cultivars with tall stems and large flower heads were selected.

According to Lentz et al. (2008a), the sunflower was also domesticated independently in Mexico. This is disputed by Brown (2008) and Heiser (2008b), to whom Lentz et al. (2008b) respond. Brown points out that the Mexican names for the sunflower are all motivated, indicating a relatively recent origin. Heiser adds that there is no convincing mention of the plant in Hernández and Sahagún.

Introduction to Europe in the 16th century

Dodoens's illustrations are from the same wood engraving. They represent a cultivated type with a single large flower head. Leaves are drawn as alternate, although they are in fact opposite decussate.

During centuries, sunflower was grown as an ornamental plant. Targioni-Tozzetti mentions it in his chapter about ornamental plants, and Candolle omits it because he did not deal with ornamentals.

Its use as chicken food may have begun then, and is still practiced up to now (as entire heads). Sunflower has been one of the most important temperate oilseeds in Europe since the 1970s. Varieties rich in oleic acid ("Oleisol") are also grown.

Adoption as an oil crop in Russia

This transition is mainly due to the Orthodox Church. The latter indeed imposed long periods of leanness, during Lent and for Christmas. A long list of prohibited oil-rich foods was compiled in the 18th century, but sunflower was not on the list because as a newcomer, it was still largely unknown. Peasants began to cultivate the plant in Ukraine and in Kuban, and the first crushing factories were established in 1830.

During the first half of the 20th century, Russian breeders improved the oil content, and chosed a type of cultivars with small stems and medium flower heads. Russian cultivars then spread to Western Europe. Hitler allegedly invaded the Soviet Union in order to gain access to sunflower oil, among other things, as Germany was in dire need of cooking oil.

Discovery of a male-sterility character in France

In the second half of the twentieth century, Europe (and France in particular) began to invest in the research of "metropolitan" oilseeds, because it could no longer count on colonial oils. In 1969, at the INRA research station in Clermont-Ferrand, the French scientist Patrice Leclercq discovered a cytoplasmic male sterility trait by hybridizing a sunflower with Helianthus petiolaris Nuttall. This event allowed an easy production of F1 hybrid seeds. This trait is now used all over the world, and global sunflower production has doubled since. Sunflowers has even come back to North America, to be cultivated as a cash crop for the first time.

Nowadays, the pith is tested as an insulating material in construction (Magniont, 2010)