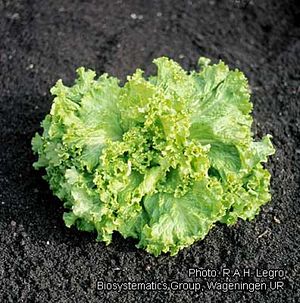 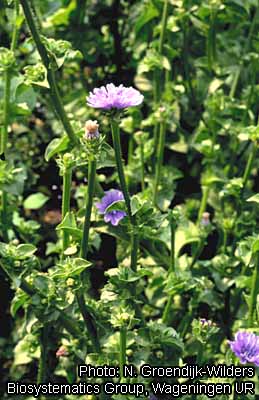 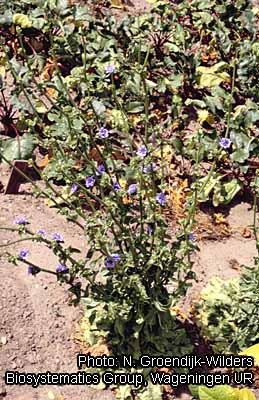 Cichorium endivia is only known from cultivation. It was probably first brought into cultivation in the Mediterranean region, where its wild relatives Cichorium pumilum Jacq. and Cichorium calvum Sch.Bip. ex Asch. occur. Both species can be considered as the progenitor of escarole and endive. Cichorium endivia was probably known to the old Egyptians, but no archaeological evidence has been found. It spread to central Europe in the 16th century and is now grown throughout Europe and North America. It is grown throughout the tropics including tropical Africa, but is mostly of minor importance there.

Endive is most commonly eaten as a fresh green in salads, for which curly-leaved types are often preferred. Plants for salads are sometimes blanched to reduce bitterness. Endive is used as a substitute for lettuce in the tropics as it is more resistant to diseases. Broad-leaved types (escarole) are also used as a cooked vegetable. Cichorium endivia is sometimes used in making pickles, but is otherwise not used in a processed form.

Cichorium endivia contains inulin and intybin, which cause the typically bitter taste and which are said to stimulate appetite. More than 100 volatile compounds have been identified; among them hexenal, (E)-2-hexenal and β-ionone, contributing intense odour notes.

Cichorium comprises 6 species and occurs naturally in Europe, northern Africa, and western and central Asia. Two species are commonly cultivated (also in tropical Africa): Cichorium endivia, which is not known from the wild, and Cichorium intybus L. (chicory), which is grown for its roots used as a coffee surrogate, forage and as a source of inulin (fat replacer), and as a leafy vegetable (witloof and radicchio) popular in Europe. These two species are often confused as they are morphologically very similar, but they differ in life span and reproductive system (Cichorium intybus is a self-incompatible perennial), whereas DNA-based analytical methods did not support a close relation.

– Cutting Group (has also been called Small Endive Group, Endivia Group or var. endivia): with very small leaves that do not form a head; cultivars belonging to this group are hardly grown anymore.

Cichorium endivia forms a dense rosette of leaves in the first year. Upon bolting the stem elongates and branches. The inflorescence bears many heads. Flowers are usually open in the morning only and wither after about 6 hours. Most cultivars are self-pollinating but some cross-pollination by insects may occur.

Escarole and endive are easy to cultivate. They are more tolerant of high temperatures than lettuce and can be grown from cool temperate areas to tropical lowlands, though in the tropics better results are obtained above 500 m altitude. The mean daily optimum temperature for growth is 15–18°C. Mild frost is tolerated. At high temperatures leaves may become fibrous. Cichorium endivia requires long days for flowering and rarely flowers in the tropics. Vernalization (in some cultivars at temperatures below 15°C) gives an additional stimulus to flowering and can occur already during ripening of the seed, but also during storage of seed and from sowing onwards.

Escarole and endive prefer a loose, pervious soil, sufficiently fertile, especially in the top 20 cm, with a pH of 6.5–7.8.

Cultivation of escarole and endive is similar to that of lettuce, but generally less demanding. They require a deeply tilled soil and a friable seed-bed. They are propagated by seed. If sown in a nursery, seedlings are transplanted about 1 month after sowing, when they have 4–6 leaves. Direct sowing is practised as well. The 1000-seed weight is 1.3–1.6 g; about 0.5 kg/ha of seed is required. The planting distance is 25–40 cm × 25–40 cm, with the widest spacings for broad-leaved cultivars. Dense planting favours self-blanching, but increases the risk of rot.

Nitrogen requirements are moderate, heavy applications leading to strongly increased nitrate contents in the leaves and increased susceptibility to rotting. Phosphate requirements are high, those of potassium moderate, a crop of 12 t removing about 8 kg of P and 40 kg K. Mg deficiency may occur on acidic soils or where ample potassium is available, but can be corrected by spraying a 2% solution of magnesium sulphate.

An irregular supply of moisture may cause discoloration of the edges of younger leaves. The plants do not tolerate waterlogging.

Diseases and pests are rarely serious. Botrytis cinerea, Sclerotinia spp. and various bacteria may cause ‘bottom rot’ (rot of the base of the plant), Marssonina panattoniana and Alternaria cichorii can cause leaf-spot, Bremia lactucae downy mildew. Escarole and endive are resistant to Cercospora longissima, which affects lettuce. Turnip mosaic virus (TuMV) and Endive necrotic mosaic virus (ENMV) may cause mosaic, yellowing and necrosis. Aphids and various caterpillars may also cause damage. Escarole and endive should not be planted after pulses, carrots, potatoes, garden beets and other composite crops, because of possible nematode build-up.

Escarole and endive mature in 60–100 days from sowing. About a week before harvesting, heads may be tied up in order to blanch them and to moderate their bitterness. Blanching can also be achieved by covering each plant with a pot or container to exclude light (for about 10 days). There are self-blanching cultivars (especially when densely planted). Harvesting can start when heads have reached a marketable size (250–400 g). It is done by cutting the heads from the roots, removing the outer, discoloured or damaged leaves and placing the heads upside down in containers.

Yields of 20 t/ha of marketable produce per crop can be attained.

At ambient temperatures escarole and endive can be stored for only 1 day. When cooled to 0–1°C and at a humidity of 90–95%, healthy heads can be stored for up to 2 weeks. When grown in the tropics, they are often very bitter; this bitterness can be reduced by packing individual heads fairly tightly in plastic foil and storing them for 4–5 days in a refrigerator at 7°C.

Endive and less commonly escarole have a place in Western cuisine in the tropics, where they often complement or replace lettuce in salads. Their relative ease of cultivation, resistance to bolting and the availability of self-blanching cultivars favour their continued cultivation.