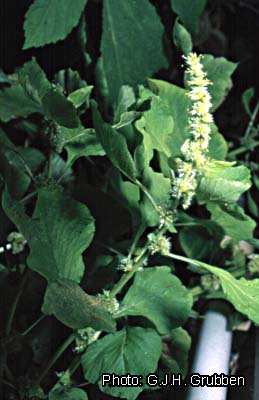 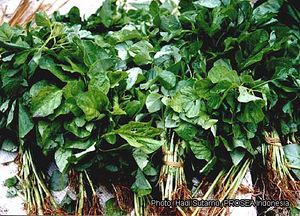 product on the market

Amaranthus tricolor is used as a cooked leaf vegetable. In Asian countries it is occasionally eaten raw in salads; the soft stems are eaten like asparagus in India. Forms with bright red and red, yellow and green-coloured leaves are grown throughout the world as ornamentals. Medicinally Amaranthus tricolor is used externally to treat inflammations, and internally as a diuretic.

In spite of its importance in Asia no production statistics on Amaranthus tricolor are available, as in most cases all leaf vegetables are treated as one commodity and probably also because it is mainly grown on small plots. In Africa Amaranthus tricolor is grown on a limited scale in home gardens or as a commercial vegetable, but it is of little economic significance.

The composition of Amaranthus tricolor leaves is comparable to that of other amaranths such as Amaranthus cruentus L. Although the general dry matter content is high (9–22%), the tenderness of Amaranthus tricolor is reflected in its composition by a lower dry matter and lower fibre content than in other Amaranthus species. The moisture content and composition show large variations as a function of plant age, ecological conditions and cultural practices such as fertilizing. Amaranth leaves contain per 100 g edible proportion (89%): water 88.9 g, energy 75 kJ (18 kcal), protein 3.5 g, fat 0.3 g, carbohydrate 0.3 g, dietary fibre 2.6 g, Ca 270 mg, Mg 130 mg, P 65 mg, Fe 3.0 mg, carotene 1725 μg, thiamin 0.07 mg, riboflavin 0.22 mg, niacin 0.7 mg, folate 85 μg, ascorbic acid 42 mg (Leung, W.-T.W., Busson, F. & Jardin, C., 1968). The protein content of the leaves (20–38% based on dry matter) is high and includes methionine and other sulphur-containing amino acids. The content of essential micronutrients, especially calcium, iron, carotene, folate and vitamin C, is high in comparison with other vegetables. The calcium occurs partly as insoluble oxalate, which is not taken up in the digestive tract. The bioavailability of the iron is 6–12%. The leaves easily become soft after 5–10 minutes cooking in lightly salted water. Some types contain much anthocyane, a brilliant red pigment that dissolves in the cooking water, which is poured off. The leaves and stems contain the antinutrients nitrate (most in the stems) and oxalate, but adverse nutritional effects are not likely with consumption of up to 200 g per day. Moreover cooking in ample water removes toxic components. The rather high content of hydrocyanic acid and oxalic acid makes it less suitable for fresh consumption by humans and is a limiting factor for the use as fodder for animals. However, unlike other Amaranthus species, Amaranthus tricolor is sometimes consumed raw as a salad.

In dishes with green leafy vegetables or pot herbs, Amaranthus tricolor can be replaced by Amaranthus cruentus or other amaranths.

Amaranthus comprises about 70 species, of which about 40 are native to the Americas. It includes at least 17 species with edible leaves.

Emergence of the seedling takes place 3–5 days after sowing. Vegetative development is fast. Like maize and sugar cane, Amaranthus is characterized by the C4-cycle photosynthetic pathway, which means a high photosynthesis at high temperature and radiation. Flowering may start 4–8 weeks after sowing. Pollination is effected by wind but the abundant pollen production causes a high rate of self-pollination. The first seeds mature about 6 weeks after sowing. The plant becomes senescent and stops growing after about 4 months, and subsequently dies. With repeated picking, Amaranthus tricolor plants may become some months older.

Weedy plants of Amaranthus tricolor can be found occasionally on cultivated land, flood plains, roadsides and wasteland. Vegetable amaranths, including Amaranthus tricolor, grow well at day temperatures above 25°C and night temperatures not lower than 15°C. Shade is disadvantageous except in cases of drought stress. Amaranthus tricolor is a vegetable suited for cultivation in the tropics from sea level up to 1000 m altitude and in subtropical areas and warm temperate areas during the summer. It shows a quantitative short-day reaction, but the daylength reaction is not strong. In India, Amaranthus tricolor is known as a plant showing a qualitative short-day reaction, requiring 15 hours or less daily light for induction of flowering.

Amaranths like fertile, well-drained soils with a loose structure; on poor soils only modest crops can be produced. The mineral uptake is very high.

. The seedweight of Amaranthus tricolor is 1200–2900 seeds/g. Growers spare a few vigorous plants at harvest for seed production. Market seed production fields yield 300–600 kg seed per ha in a five-month period. For commercial seed production an isolation distance of 200 m should be respected. In home gardens scattered seed of flowering plants gives rise to new plants. Germination is stimulated by darkness. The seed may be mixed with sand for easier sowing. The common practice is to sow directly, broadcast or in rows with 10–20 cm between the rows, with a seed rate of 2–5 g/m2. Unlike for Amaranthus cruentus and Amaranthus dubius Mart. ex Thell., sowing in a seedbed and transplanting is not recommended, the plantlets being too weak. Amaranthus tricolor is normally grown as a sole crop on beds. It is also found in intercropping systems with food crops and in home gardens.

Amaranthus tricolor is fast growing, albeit less so than the more commonly cultivated Amaranthus cruentus and Amaranthus dubius. Weeds such as pigweed (Portulaca) or nut grass (Cyperus rotundus L.) may be troublesome. If rainfall is not sufficient, irrigation by sprinkling should be done before the plants start wilting. Amaranthus tricolor is much more susceptible to drought than other vegetable amaranths. Watering every day with 6 mm (6 l/m2) is sufficient. Water shortage causes early flowering, which reduces the yield and the market quality. Amaranth is a very high consumer of minerals. The mineral uptake of a crop yielding 15 t/ha is about 75 kg N, 15 kg P, 150 kg K, 45 kg Ca and 25 kg Mg. Larger quantities of N and K are easily absorbed as luxury uptake if these elements are abundant. Amaranth responds to high rates of organic fertilizer. In some places it is grown on large quantities (up to 50 t/ha) of almost fresh town refuse, which fulfils its need for minerals. On poor soils, the application of 250 kg/ha of NPK 10–10–20 in addition to 25 t of organic manure is recommended. A split application is recommended during the rainy season. Response to nitrate-N is better than to ammonium-N. Amaranth does not need to be rotated with other crops since no serious soilborne diseases have been observed.

In general Amaranthus tricolor is more susceptible to pests and diseases than the sturdier Amaranthus cruentus. The main disease is stemrot caused by the fungus Choanephora cucurbitarum. A wider spacing may reduce the rate of infection. Damping-off caused by Pythium and Rhizoctonia may be serious in seedlings. It is controlled by good drainage. Over-dense sowing should be avoided. Fungicides such as dithiocarbamates have some effect. Some cultivars are quite resistant. In India white rust (Albugo bliti) is sometimes serious. In Brazil a serious leaf and stem blight caused by Phomopsis amaranthophila occurs. No virus diseases have been reported.

Insects are a more serious problem for amaranth growers. Caterpillars (Hymenia recurvalis, Spodoptera litura, Heliothis armigera) and sometimes grasshoppers are the most harmful pests. The larvae of the stem borer Lixus truncatulus may cause much damage, sometimes already in the seedling stage. The basal part of the plant containing the pupae swells and the plant growth is much retarded. Many other insects such as aphids, leaf miners, stinkbugs, mole crickets and mites attack amaranth but generally cause only minor damage. Commercial growers now spray insecticides instead of using the traditional control method of spreading wood ash to dispel insects. Amaranth is not very susceptible to nematode attack.

Commercial growers harvest by uprooting or by cutting at ground level. This once-over harvest may be done 3–4 weeks after sowing. Some growers obtain a second harvest 3 weeks later from the regrowth of the smallest plants. Repeated cutting (ratooning) is sometimes practised too; the first cutting about one month after transplanting, and then every 2–3 weeks for a period of one to two months. Amaranthus tricolor is less suited to ratooning than other amaranth species.

Harvested plants or shoots are bundled, the roots are washed, and the produce is packed for transport to the market. In markets and shops, it is sprinkled with water to keep a fresh appearance. If uprooted, the vegetable can be kept fresh for some days by putting it in a basin with the roots in the water. Amaranth is sold per bunch or by weight.

Amaranthus tricolor is present in Amaranthus collections at the National Bureau of Plant Genetic Resources (NBPGR), New Delhi (India), at the Rodale Organic Gardening and Farming Research Center (OGFR), Kutztown, United States, and at the Asian Vegetable Research and Development Center (AVRDC) at Tainan, Taiwan. Many national research institutes in Asia have working collections of local cultivars. In Africa Amaranthus tricolor is only occasionally cultivated, and the genetic diversity is unclear.

There are many local types and cultivars of Amaranthus tricolor. They are distinguished from each other by plant habit and characters such as leaf form, leaf/stem ratio, growth vigour, resistance to fungal diseases, photosensitivety, succulence and taste. Most cultivars are dark green, others are pale green, some have a large brown-red spot of anthocyane in the centre of the leaf blade, others are completely purple. Breeding work has been performed e.g. in Indonesia, India, Thailand and Taiwan. Many commercial cultivars are available in South and South-East Asian countries, e.g. from East-West Seed Company in Indonesia and Thailand. Cultivar ‘Tampala’ is adapted to cultivation in southern United States, cultivar ‘Lal Sag’ is popular in India. Several productive commercial cultivars were developed at Tamil Nadu Agricultural University, Coimbatore, India. Some cultivars are more suited for pulling, others for clipping. Many cultivars are selected for a high (>2) leaf/stem ratio.

Amaranthus tricolor is recognized as an easy-to-grow, productive, tasty and nutritious vegetable. Research should focus on optimization of cultural practices, especially integrated pest management to avoid pesticide residues, and on breeding for disease resistance. Heterosis effects in crosses between less-related types may be exploited. Selection for low oxalate content will improve the nutritional availability of calcium, iron and zinc.