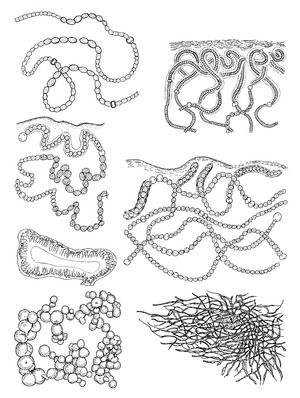 Nostoc has a cosmopolitan distribution. These common terrestrial and sub-aerial algae can be found in alkaline soils, especially in rice fields, and on moist rocks and cliffs. Occasionally they occur in marine waters or in brackish habitats, such as salt marshes and mangrove swamps. Nostoc-containing lichens can be dominant primary producers in some areas.

N. commune is collected in moist hilly locations of the Ilocos region in the Philippines and eaten as green salad. Some other Nostoc spp. (N. linckia, N. microscopicum) are also collected in the same area. In Thailand N. verrucosum is used for food. The marine form of N. commune, var. flagelliforme, is collected for food in China, Japan and Java (Indonesia). The dried algae are cooked with noodles, vegetables and mushrooms, and served as a vegetarian dish or a soup by the Chinese. They often serve it as a New Year's dish. In paddy soils, the ability of Nostoc to fix atmospheric nitrogen increases the nitrogen content of those soils, and thus may increase rice yields. The blue-green algae living in the water fern Azolla Lamk may belong to the genus Nostoc, although they are usually considered to be Anabaena spp. Nostoc colonies can be a nuisance on sport turfs, as they make them very slippery.

Dried N. commune var. flagelliforme is exported from China to Malaysia, Singapore, Hong Kong and Taiwan, but data on international trade are not available.

The nitrogen fixation rate on the basis of acetylene reduction activity ranges between 567-1090 nM C2H4g/h.

The cells of Nostoc divide by binary fission, which increases the length of the contorted trichomes. Reproduction is through the development of akinetes (spores) and by hormogonia (short, motile trichomes) as well as by fragmentation or budding of large colonies. Not all species form akinetes. In N. commune akinetes do not occur. The development of motile hormogonia forming a mature aggregate of filaments occurs entirely within a common matrix, and thus the aggregate has a fixed shape within the pellicle. This pellicle can be ruptured by the protruding hormogonia ("budding"), resulting in the formation of new colonies. The formation of motile hormogonia is promoted by red, but is blocked by green or white light. In N. muscorum and other Nostoc spp. hormogonia can form gas vesicles which probably allow the species to disperse more rapidly in flooded soils. Some strains of Nostoc are probably facultatively heterotrophic: in laboratory experiments many strains are able to grow on glucose, fructose, ribose, or sucrose.

Optimal temperatures for growth of N. commune range between 20-30°C, while optimal pH ranges between 6.5-8.5. The alga colonies can survive desiccation for months or years and recover their metabolic activity after rehydration. During desiccation, specific proteins are synthesized, fatty acid profiles and mRNA pools are altered, and nitrogenase activity is lost. The large amount of sheath material increases the resistance of the alga to desiccation and also protects it against high light intensity and grazer attack. N. commune var. commune is a freshwater variety that occurs on moist soils, rocks and in stagnant waters, including paddy fields. N. verrucosum occurs also on moist soils and rocks, while N. linckia, N. microscopicum and N. muscorum are mainly limited to moist soils only, including paddy-field soils.

N. commune is one of the dominant algae in rice fields. The abundance of the alga is found to be significantly correlated to mean solar radiation and the amount of orthophosphate in the floodwater, but is suppressed by the addition of urea. Phosphorus and inorganic carbon generally limit productivity of Nostoc. Other elements related to maintenance of growth, photosynthesis or nitrogenase activity include boron (both for growth and nitrogenase synthesis), molybdenum (in nitrogenase and nitrate reductase) and vanadium (can partly substitute for molybdenum).

An important interaction of Nostoc with fungi is the formation of lichens. The fact that Nostoc can withstand repeated drying, is photosynthetic and is able to fix atmospheric nitrogen, makes it an ideal symbiont for fungi. Some Nostoc spp. interact symbiotically with various plants, including liverworts, hornworts, mosses, cycads, and several Angiosperms. All known Gunnera spp. support a Nostoc sp. as an endosymbiont. The Nostoc supplies fixed nitrogen to the host.

N. commune can be grown in liquid or solidified inorganic medium (2% w/v agar), either BG11 or Bold's Basal Medium. The nitrogen source can be omitted, especially if the cultures are being used for nitrogen-fixation studies. Illumination (42 μmol photon m2s1) can be provided by fluorescent lamps (Grolux or Truelite) under a 12:12 h light-dark cycle. The cultures are non-homogenous, with the filaments forming aggregates even though they are agitated by orbital shaking.

There is no commercial cultivation of N. commune. However, this is one of the species in the blue-green algal mixture cultured for use as biofertilizer in rice fields (algalization). In India, the soil-based mixture of algae is cultured in iron trays or cement tanks containing water mixed with 8-10 kg soil, 200 g superphosphate and 10 g insecticides.

Some cyanophages can infect Nostoc, but no studies have been published regarding the importance of infection in natural populations. Insecticides such as folidol (1 ppm), parathion (7.5 ppm) or carbofuran (3% granules) are added to prevent breeding of mosquitoes and other insects in the culture basin.

The blue-green algae for soil algalization are harvested in the form of a soil-based mixture.

In the mixed cultures of blue-green algae for soil algalization each tray or tank measuring 2 m × 1 m × 0.25 m may yield up to 1.5-2 kg of algal material; however, the percentage of biomass contributed by N. commune is not known.

After sun-drying, soil flakes containing the mixture of bluegreen algae are applied in rice fields at 8-10 kg per ha, 1 week after transplanting. N. commune thalli collected for food are either directly sold at local markets or sun-dried before transport.

Investigations into the control of the nitrogenfixation process in N. commune, especially at the molecular level, should be intensified. This includes the search for more information on the use of Nostoc and other blue-green algae in sustainable agricultural practices. Efforts should also focus on the selection of highyielding strains. The potential of these algae as sources of fine chemicals, such as pigments and bioactive compounds (antibiotics and anti-HIV compounds), is worth exploring. Their demonstrated cholesterol-reducing ability suggests future use as nutraceutical. The possibility of growing these algae by immobilization for the photoproduction of gas should also be investigated.