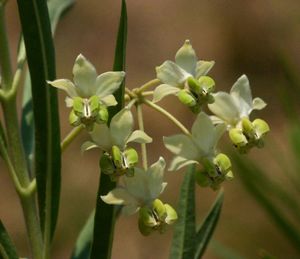 Gomphocarpus fruticosus occurs wild throughout East and southern Africa, South Africa, as well as in Yemen, Oman and Saudi Arabia. In several other African countries, including Senegal, Guinea, Côte d’Ivoire, Cameroon, Sudan, Madagascar and Mauritius, it is naturalized. It is furthermore naturalized and rather common in northern Africa, southern Europe and eastern Australia; in Australia it is considered a noxious weed. In other countries in the tropics and subtropics it has probably escaped from cultivation more recently, and is sometimes naturalized.

In Ethiopia crushed fresh or dried leaves are applied to sores. In Namibia leaf tea is drunk and the body is rubbed with tea and leaves to treat skin cancer. In Botswana fresh powdered leaves are soaked in water and the liquid is drunk to induce vomiting in case of hepatitis. In South Africa leaf powder is used as snuff for headache as a sedative and to treat tuberculosis; it produces prolonged sneezing. In southern Africa and the Indian Ocean Islands a leaf maceration or infusion is drunk to treat stomach-ache and diarrhoea of children, and to stimulate contractions during childbirth. A leaf or whole plant infusion is also drunk to treat asthma, bronchitis, cardiac palpitations and gas formation.

In the Indian Ocean Islands a plant or seed decoction is taken 2–3 times daily against cardiac problems, as a tonic. Depending on the dose a plant decoction is considered a cardiac tonic, emetic or toxic. In Madagascar swellings are treated by massage with a plant decoction. To treat lumbago the plant is dried, ground and mixed with honey to a paste for application with massage.

The inner bark yields a white fibre and is used in the way as that of Gomphocarpus physocarpus E.Mey. In Somalia and southern Africa the stem fibre and floss from the fruit are used as string for snares and to make waistbands and fishing nets. The floss is also used as tinder. In southern Africa the floss is used for stuffing mattresses and pillows. In Somalia the cleaned stems are used by shepherds for driving sheep.

In Lesotho the roots are cooked and eaten as a vegetable. In Kenya the Maasai people eat the fruit. Livestock browse the plants, but it is considered poisonous if eaten in large quantities, causing respiratory problems and severe gastroenteritis. Foliage and the fruit are used in floral arrangements also dry. When working amongst Gomphocarpus fruticosus grown as a cut-plant protective clothing is suggested, as some people have an allergic reaction to the latex. In southern Africa and Madagascar the plant enters into magic rituals and is used against bewitchment.

The latex contains the papain-like protease asclepain f. The latex has proteolytic activity. The diluted and centrifuged latex is reported to contain 276 μg of protein/ml and the proteolytic activity reached 1.2 caseinolytic U/ml. This enzyme preparation was found to be stable after 2 hours at 45°C but was quickly inactivated after 5 minutes at 80°C.

An aqueous extract of the dried and powdered aerial parts showed prolonged, irregular contractions of high amplitude in Guinea pig uterine smooth muscle in vitro. The extracts have cardiotonic and antihypertensive but not decongestant or analgesic activities. Methanolic and aqueous extracts of the aerial parts demonstrated a noteworthy growth inhibitory effect against 3 cancer cell lines with IC50 values <50 μg/ml. A methanol extract of the fruits showed significant antiplasmodial activity in vitro. Water, hexane and ethanol extracts of the dried leaves, assessed for in-vitro antibacterial activity against Staphylococcus aureus, Klebsiella pneumoniae, Bacillus subtilis and Escherichia coli were found to be inactive.

Gomphocarpus comprises about 22 species in tropical Africa and Peninsular Arabia. In Gomphocarpus fruticosus 5 subspecies are distinguished, depending on the hairiness of the plant, the colour of the flower and the presence of processes and form of the fruit. It is found to hybridize with Gomphocarpus physocarpus.

Several other Gomphocarpus species in tropical Africa are used medicinally.

Gomphocarpus cancellatus (Burm.f.) Bruyns and Gomphocarpus filiformis (E.Mey.) D.Dietr. occur in Namibia and South Africa. Dried and powdered roots or aerial parts are used as a snuff to treat influenza and colds.

Gomphocarpus glaucophyllus Schltr. occurs from Uganda south to South Africa. In Zimbabwe a root infusion is drunk to treat asthma. A root decoction is given to babies to stop vomiting.

Gomphocarpus purpurascens A.Rich. is an endemic species of Ethiopia. The fresh or dry root bark is pounded with water and drunk to cure fever.

Gomphocarpus stenophyllus Oliv. occurs in the semi-arid regions of southern Ethiopia, Kenya and Tanzania. In Kenya a root decoction is drunk to treat diarrhoea.

Gomphocarpus tomentosus Burch. occurs throughout southern Africa. In Namibia the powder of leaves and stems is used as a snuff to treat colds with nasal discharge. A decoction of the whole plant is used as a genital wash to treat venereal sores. Powder of roasted leaves is applied to wounds and venereal sores. In Botswana dried leaves are taken as an emetic; powdered roots macerated in water are taken as an emetic after poisoning. In South Africa the Tsonga people drink a root decoction to treat intestinal worms.

Gomphocarpus fruticosus is easily propagated by seeds and by lateral roots. Because of their deep taproot, they do not transplant readily. Best results are derived from raising plants from seeds or root cuttings and containing them in individual pots until they are planted.

In Kenya discoloration of the green fruits and stem to brownish and purplish colours is a major problem of Gomphocarpus fruticosus plants grown as cut-flowers. Discoloration of the fruits has been found to be caused by plant nutrition (declining N, P, K, Ca, Mg content or increased Fe, Cu, Zn content), prolonged exposure to sunlight and water stress, although other factors, including fruit maturity, soil pH and cross pollination between different varieties may also play a role. Fruit hairlessness also makes the plants unmarketable.

In Kenya Gomphocarpus fruticosus faces several major pest challenges when planted as a crop. Viral infections cause blackening of stem and fruits and stunting of plants, resulting in small unmarketable fruits. Pests include root knot nematodes and insects such as cotton stainers (Dysdercus sp.), aphids (Aphis gossypii), thrips and bollworms (Helicoverpa armigera), as well as mites (Tetranychus sp.). Larvae and adult beetles of Corynodes and Euryope (Chrysomelidae) feed on the roots. It is also a preferred food plant for caterpillars of Danaus plexippus, but they do not kill the plants.

Gomphocarpus fruticosus bears fruit almost all year round. As it tends to grow very fast, several harvests can be made in the course of the year.

The latex of Gomphocarpus fruticosus is corrosive, and causes skin irritation, so careful handling of the harvested parts is required.

Gomphocarpus fruticosus is common and widespread, and there is no risk of genetic erosion.

No breeding programs are known to exist for Gomphocarpus fruticosus grown as an ornamental cut-plant, although selection of high-yielding plants with optimal fruit formation is needed to improve its market value.

Although chemical analyses have confirmed the presence of a range of cardiac glycosides as well as other compounds, not many pharmacological analyses have been effected to confirm the different traditional medicinal uses, and more research should therefore be undertaken. Because of the toxicity of the plant, the different plant parts should be used with care.

Concerning its use as an ornamental cut-plant, different trials are needed to determine the cause of fruit discoloration, optimum plant spacing and frequency of top pinching, as well as quantification of yield losses, identification of the plant viruses, pest population dynamics and management strategies. The latex should be analyzed to determine the level of protection needed when handling the plants. Since it is cross-pollinating, propagation through seeds leads to character segregation and likelihood of non-uniformity of fruits, internode length and plant height. Development of tissue culture protocols through meristem propagation would be useful for rapid multiplication of uniform, disease free and true to type progeny with uniform fruits and internode length. There is furthermore a need to develop maturity indices and design appropriate packaging for the fruiting stems to enhance its quality and consequent market value. Finally the value chain should be strengthened through enhanced linkages among the growers, researchers, microfinance institutions and marketing agents for local and export markets.