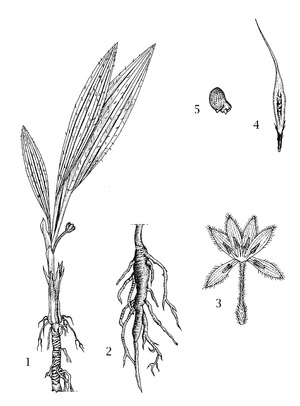 C. orchioides occurs from the subtropical Himalayas of Pakistan and India, to Cambodia, Vietnam and Laos, southern China, Taiwan, southern Japan, to Thailand and Malesia (at least known with certainty from Java and the Philippines), and possibly also to northern and eastern Australia. The distribution in Malesia is very incompletely known.

A decoction of the powdered rhizomes ("Curculiginis Rhizoma") is used in Chinese traditional medicine as a general tonic and analeptic in the treatment of decline (especially of physical strength). In the Philippines, Nepal and India, the rhizome is used as diuretic and aphrodisiac, and to cure skin diseases (externally), peptic ulcers, piles, gonorrhoea, leucorrhoea, asthma, jaundice, diarrhoea and headache. In Thailand, the rhizome is used as a diuretic and to treat diarrhoea. In Papua New Guinea, the rhizome and leaves are softened by being heated over a fire, before being rubbed on the body to serve as a contraceptive. In China, additional reported indications include the treatment of lumbago, arthritis, chronic nephritis, hypertension and the use as an emmenagogue, and in India, C. orchioides is used to induce abortion. Powdered rhizomes are normally used in decoction, but are also sometimes given with an equal quantity of sugar in a glass of milk. It is reported that the rhizomes are also used to produce flour in India.

Sliced and dried rhizomes of C. orchioides are traded in small quantities in local markets in China and Indo-China.

The rhizome tastes slightly bitter and is mucilagenous. The alcoholic extract from the rhizome is reported to have adaptogenic, anti-inflammatory, anticonvulsive, sedative, androgenic and immuno-stimulating activity. The water extract of the rhizomes exhibits andrenergic receptor blocking (alpha 2), cholecystokin receptor binding, hypoxanthine-guanine phosporibosyltransferase inhibition and uterine activating activity. Swelling of the tongue has been reported as a side-effect after drinking a decoction from the rhizome; in China the recommended antidote is a decoction of Rheum tanguticum Maxim. ex Balf. with sodium sulphate.

A series of 10 triterpenoidal saponins (curculigosaponins A-J) have been isolated from the rhizomes. All these compounds have curculigenine A (3β,11α,16β-trihydroxycycloartane-24-one) as the aglycone. Pharmacological studies have shown that curculigosaponins C and F can promote the proliferation of spleen lymphocytes in mice very significantly, and that curculigosaponins F and G increase the weight of the thymus in vivo in mice. The triterpene alcohol, curculigol (24-methylcycloart-7-en-3β,20-diol), whose structure is very similar to curculigenine A, has also been isolated.

Four phenolic glycosides have been isolated and identified: curculigoside, orcinal glycoside, curculigine A and corchioside A. Curculigoside from the rhizomes exerts immunological and protective effects. It has been found a characteristic constituent of "Curculiginis Rhizoma", and a quantitative determination method using HPLC has been developed. The determination was performed indirectly by measuring the content of 2,6-dimethoxybenzoic acid, the hydrolysis product of curculigoside. Using this method, an average content of 0.2% curculigoside has been found in rhizomes from China.

From the fruits of Curculigo latifolia Dryander, which grows wild in western Malaysia, 114 amino acids containing the peptide curculin were isolated. Curculin itself elicits a sweet taste (550 times sweeter than sucrose on a weight basis), which disappears rather rapidly after holding it in the mouth. Tasting a lemon (or ascorbic, citric or hydrochloric acid) afterwards then elicits a sweet, orange-like taste. This taste-modifying sensation lasts for about 10 minutes.

Rhizomes of Curculigo orchioides may reach 30 cm × 11.5 cm. Only 3-5 leaves are found on the plant at a given time. The flowers and fruits are inconspicuous because they are close to the ground and partially covered by the bracts and leaves.

C. orchioides belongs to a genus of approximately 10 species with pantropical distribution. Curculigo has been variously included in Amaryllidaceae and Liliaceae, but is nowadays usually considered as belonging to the comparatively small family Hypoxidaceae with about 10 genera.

C. orchioides occurs in open fields and grasslands. In Java it grows on periodically very dry, sunny or slightly shaded localities in grasslands and teak forest up to 400 m altitude. In the Philippines it is also found in grasslands, often dominated by Imperata.

There is no information about tests on propagation of C. orchioides, but the method described for C. latifolia may be applicable. In trials with tissue culture of C. latifolia for propagation for ornamental purposes, cultures of rhizomes showed the best results. A half-strength Murashige and Skoog medium was used, supplemented with sucrose (30 g/l), thiamine (0.4 g/l), coconut water (150 ml/l), kinetin (5 mg/l) and indole-acetic acid (2.5 mg/l). About 90% of the plants potted out survived.

In India, rust (Puccinia hypoxidis) is reported from C. orchioides.

C. orchioides is not planted and rhizomes are collected from the wild.

The rhizomes are washed, freed from roots, and sliced; the slices are dried in the shade. Usually the dried slices are powdered, and small amounts of powder are mixed in a glass of milk with sugar or used to prepare a decoction for drinking.

C. orchioides has been recorded amongst the rare and endangered ethno-medical plants in India. However, it has a large area of distribution, is locally rather common, is by no means restricted to endangered vegetation types, and therefore does not seem endangered or liable to genetic erosion.

C. orchioides may prove a valuable medicinal plant because its active compounds are known and comparatively well documented and a suitable method has been developed for quantifying one of them (curculigoside), which is important for quality control of the drug. However, more research is needed and appropriate cropping techniques should be developed so that C. orchioides can be cultivated.