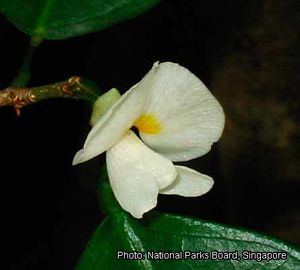 close up of a flower (National Parks Board, Singapore) 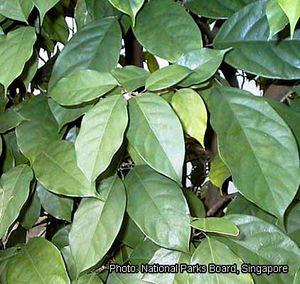 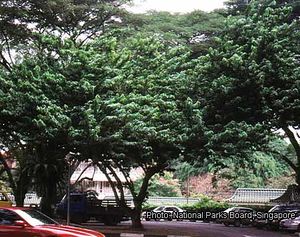 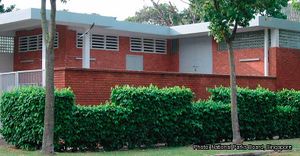 Baphia nitida occurs wild from Senegal to Gabon. It is often cultivated near villages, formerly as a dyewood especially in Sierra Leone and Liberia, now more often as an ornamental shade tree or as fence and hedge.

The heartwood (camwood) and roots of Baphia nitida yield a red dye that was used locally until recently to dye raffia and cotton textiles. The name ‘camwood’ is most probably derived from the Sierra Leone Temne or Bulom name ‘kam’. It was exported on a large scale to Europe from the 17th century and to North America from the 18th century as one of the main ‘redwood’ dyes for wool, cotton and silk. Camwood was considered by European and American dyers to have a colouring power 3–4 times stronger than the other ‘insoluble’ redwoods they were using. In the wool industry, camwood was not only used to obtain red colours but a large range of reddish to dark brown colours called ‘drabs’, ‘muddy brown’ and ‘London smoke’, mostly in combination with other dyewoods. In small quantities, it was an ingredient of recipes for bronze-green colours and was used as ground dye followed by a logwood (Haematoxylum campechianum L.) dye bath. It was used for dark grey and black colours in the wool-cloth industry until the beginning of the 20th century. It was a major source of bright to dark red colours in the big European cotton-printing industries, e.g. to dye bandanas in ‘mock turkey red’, and it was also used, principally in the United Kingdom, to dye silk pink, ‘acid brown’ and ‘light claret’. In West Africa, powdered heartwood is a familiar red body paint and the paste is much used as a cosmetic for the skin, e.g. in Liberia, Côte d’Ivoire and Ghana. As body paint it is considered to have magic powers: Guéré and Krou healers of Côte d’Ivoire use it for religious ceremonies, and in Ghana warriors who had killed an enemy or a leopard painted their foreheads with camwood for ritual dances.

By soaking the dried and ground roots in water a red liquid is obtained, which is used for painting furniture. In southern Benin and south-western Nigeria, Yoruba ceremonial masks are painted dark red with a decoction of the wood.

Baphia nitida wood is used for house posts, rafters, naves of wheels and utensils such as walking sticks, mortars, pestles, tool-handles and farm implements. It was formerly exported to Europe for turnery and cabinetry. The plant is grown as an ornamental for shade, or as hedge and fence. The leaves are used as fodder and in southern Ghana Baphia nitida is recommended for propagation in livestock rearing areas because of its good palatability, continuous availability and high protein content. In Nigeria the seeds are eaten by Igbo people and the twigs are used as chewing sticks. In some regions the tree is considered sacred, endowed with the power to protect against evil spirits and to attract benevolent ones. In Nigeria, Tiv people colour the inside of a gourd prepared as a beehive with the red dye to attract a swarm to settle there and Yoruba honey-hunters rub their body with the dye paste to prevent bee-stings.

The leaves or leaf juice are applied against parasitic skin diseases, and a leaf infusion is drunk to cure enteritis and other gastrointestinal problems. In Ghana, Côte d’Ivoire and Nigeria the leaves and bark are considered haemostatic and anti-inflammatory, and are used for healing sores and wounds. In Côte d’Ivoire powdered leaves are taken with palm wine or food to cure venereal diseases, and leaf sap is applied as eye drops against jaundice. An extract of young leaves with some salt and red pepper is used as nose drops against headache. In Nigeria powdered heartwood is made into an ointment with shea butter (obtained from the seeds of Vitellaria paradoxa C.F.Gaertn.) which is applied against stiff and swollen joints, sprains and rheumatic complaints. In Sierra Leone a bark decoction is drunk to cure cardial pain and bark and leaves are prepared as an enema to treat constipation. In Nigeria and Ghana the pounded dried root, mixed with water and oil, is applied to a ringworm-like fungus attacking the feet. Finely ground root bark, mixed with honey, is taken against asthma. In Côte d’Ivoire a leaf extract of camwood and Senna occidentalis (L.) Link is drunk against asthma. In Benin a decoction of the leaves is taken against jaundice and diabetes; in combination with leaves of Morinda lucida Benth. it is a treatment against female sterility and painful menstruation. Externally it is applied, together with Cissus quadrangularis L., against bone fractures. A decoction of the bark is drunk against epilepsy.

Up to about the 1950s there was considerable export of camwood particularly from Sierra Leone and Liberia to Europe and the United States, both as dye and for wood turning and cabinet making. The export was mainly in the shape of logs cut into short lengths rather than in the form of powder or extract, allegedly to facilitate quality control.

The dye is found in the heartwood, which often is of small size. It is present in varying concentrations, up to about 23%. The dye is soluble in alkali and alcohol, much less so in water. The principal dyeing substances are the isoflavonoid-flavonoid dimers santalins A and B and santarubins A, B and C, but several other compounds such as baphic acid, baphiin, deoxysantarubin, homopterocarpin, maackiain, pterocarpin and santal possibly also contribute to the colouring properties. In the Colour Index the number of the dye is 75560 and it is classified as Natural Red 22, together with other redwoods.

A red tinge may appear on wounding the bark, and soaking the bark in water also yields a red dye.

In the leaves saponins, flavonoid glycosides and true tannins are present. An ointment made from the leaves showed anti-inflammatory activity in mice and rats and this supported the external use in traditional medicine. Extracts of fresh leaves inhibited digestion in mice and rats, and showed antidiarrhoeal effects. Leaf extracts also demonstrated analgesic activity in mice.

When freshly cut the sapwood is yellowish white, emitting an unpleasant smell, scarcely darkening when dry. The heartwood is pale brown when fresh, turning rapidly to dark red or orange upon exposure. The wood is extremely hard, heavy and durable, close-grained and of fine texture. It carves and turns well and planes smoothly.

Substitutes for camwood are the dyes obtained from other insoluble redwoods, such as Benin camwood (Baphia pubescens Hook.f.) and barwood (Pterocarpus soyauxii Taub. and Pterocarpus erinaceus Poir.) from Africa, sandalwood (Pterocarpus santalinus L.f.) from India and narrawood (Pterocarpus indicus Willd.) from Myanmar and the Philippines.

Baphia comprises about 45 species and is largely confined to tropical Africa with most species present in Nigeria and Cameroon.

Benin camwood, Baphia pubescens Hook.f. (synonym: Baphia bancoensis Aubrév.), has a distribution similar to that of Baphia nitida, but extending into DR Congo and their vernacular names and uses are more or less interchangeable. Its heartwood is also a source of a red dye but it has been less exploited. Baphia pubescens differs from Baphia nitida in its leaves, which are hairy below, and in its hairy ovary.

In northern Namibia the roots of Baphia massaiensis Taub. subsp. obovata (Schinz) Brummitt are used as a source of a red dye for leather hides. The roots are crushed, mixed with water, and skins are steeped in the dye bath, taking up the red dye within about one day. Formerly ox-stomachs used as aprons by women were dyed in the same way, then tanned and stretched out to dry. Baphia massaiensis occurs from southern DR Congo and Tanzania to northern South Africa, and differs from Baphia nitida in its long bracteoles, pubescent ovary and usually rounded or obtuse leaf apex. It is an extremely variable species.

Baphia nitida often grows as an understorey tree in wetter parts of coastal regions, in rainforest, in secondary forest and on abandoned farmland, from sea-level up to 600 m altitude.

Camwood is easy to cultivate and can be propagated by seeds and cuttings. For best results cuttings should be taken from rather young parts.

For dyeing purposes, the sapwood is removed from the trunk and the heartwood is sawn or cut into parts 30–50 cm long and dried. When dry it is ready for transport. To extract the dye the wood is cut into much smaller pieces or pulverized. Because the dye does not dissolve well in water the wood is boiled for 1.5–2 hours in a 45% alcohol solution or in a sodium carbonate solution (30 g for every 100 g wood). The resulting solution is diluted with water until the desired dye bath concentration is obtained, which differs according to the fibre or type of textile to be dyed and the colour wanted. Using different mordants, applied before and after the dye bath, and various mixtures with other dyewoods, a wide range of colours from red to brown, green, grey, purplish and black can be obtained.

Baphia nitida is widespread and not in danger of genetic erosion.

Baphia nitida is a multipurpose tree: the wood is a source of fast red colorants and an interesting timber, its young foliage is a source of fodder and both wood and foliage are used in traditional medicine. The timber and fodder uses seem most important at present, but increasing interest in natural dyes might revive the value of camwood to the level it had in the past. Extraction of the colorants in the countries where the trees grow, to produce liquid or powdered extracts, would bring much added value and allow further use of the extracted wood as fuel.