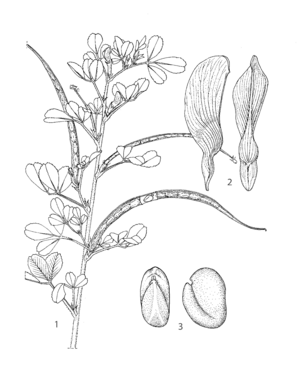 T. foenum-graecum is probably indigenous to the eastern Mediterranean, western Asia and India, but its natural distribution is hard to ascertain as it has been cultivated since antiquity, the first written record dating back as far as 4000 BC. Its cultivation spread to China, Ethiopia, Europe, the southern parts of the former Soviet Union and throughout the Arab world. In Europe and North America it is now grown on a small scale only. It has been tried successfully in Java (Indonesia), but is currently not grown in South-East Asia.

Through the ages fenugreek has been held in high repute in India, the Mediterranean and the Middle East for culinary and medicinal purposes. It was used as a fodder crop even before its medicinal powers became known in ancient Egypt and Greece, hence its name meaning Greek hay in Latin. The use of fenugreek spread through South-East Asia under Indian and Arab influence. Fenugreek, especially the seeds and the leaves, is used as a culinary spice. Ground or whole, sometimes roasted fenugreek seed with its nutty taste combined with flavours reminiscent of celery and maple is applied in spice blends and curry powders in Asian cuisine. It enhances the taste of meat, poultry and marinated vegetables. In North Africa, it is mixed with breadstuffs and in Arab cooking it is applied in the preparation of "hulba”. Boiled or parched seeds mixed with honey are also eaten as a snack. In the West fenugreek and its oleoresin are important in preparing artificial maple syrup and are also used in substitutes for caramel, vanilla, butterscotch, rum and liquorice. In Egypt and Asia the roots of sprouted seeds grown to 5-8 cm in length are eaten as a vegetable. An invigorating drink and milk substitute is prepared from dried and ground sprouted seeds. Roasted seeds are a substitute for coffee. In India the leaves are important as vegetable and condiment in spite of their bitter taste. Chopped young shoots add a bitter bite to salads. Dried leaves of a special variety named "Kasuri Mehti” are used to flavour sauces and gravies.

The herbage of fenugreek, and to a lesser extent its seed, has been used as fodder or as an admixture to hay to promote animal health and to improve the acceptability of spoiled hay. In Canada it is being developed as a high quality hay crop. Fenugreek is also grown as a green manure and cover crop.

The seeds are the source of a dye in India and of an industrial galactomannan mucilage. The oleoresin extracted from the seed is used in perfumery, cosmetics and hair tonics. It should be used with great care because it can ruin a perfume when used in the wrong combination, but works wonders in the right one. In the United States the regulatory status "generally recognized as safe” has been accorded to fenugreek (GRAS 2484) and fenugreek oleoresin (GRAS 2486). The maximum permitted level of fenugreek oleoresin in food products is about 0.05%.

Fenugreek has numerous uses in traditional medicine. The mucilaginous seeds have emolient, laxative, and vermifugal properties and are used to treat oral ulcers and chapped lips. Fenugreek poultices are said to soothe abscesses and wounds. Other properties attributed to the seeds are: aphrodisiac, emmenagogue, galactagogue and restorative. In China the seeds are applied to treat many afflictions, including abdominal pain, nephrosis, hernia and arthritis. In modern pharmacology the seed is important as a source of diosgenin, a precursor of oral contraceptives and corticosteroids. The leaves lower blood glucose levels in diabetic laboratory animals and have analgesic properties.

The oleoresin content of the seed is usually less than 0.02%. The hydro-alcoholic extract is very dark and resinous and has an intensely sweet, rootlike odour, while the petroleum extract is lighter in colour and less sweet. A minor compound, sotolon (3-hydroxy-4,5-dimethyl-2(5H)-furanone), is responsible for the characteristic curry aroma of fenugreek. A monograph on the physiological properties of fenugreek oleoresin has been published by the Research Institute for Fragrance Materials (RIFM).

The chemical composition of the seed oil resembles that of cod-liver oil and is rich in phosphates, lecithin and nucleoalbumin. It contains considerable quantities of Fe in an organic form which can be readily absorbed and substances similar to the alkaloids in cod-liver oil that stimulate appetite.

Fresh fenugreek forage is comparable to lucerne hay in digestibility. Fresh leaves contain per 100 g: water 87.6 g, protein 4.6 g, fat 0.2 g, carbohydrates 4.8 g, fibre 1.4 g, ash 1.4 g (Ca 150 mg, P 48 mg). Generally, the straw is a medium-protein roughage suitable for maintenance of dairy cattle. The protein concentrate of fenugreek seeds has an in vitro digestibility of over 95%. It contains lysine (6.5%) but is poor in sulphur-containing amino acids. The seeds are reported to contain trypsin and chymotrypsin inhibitors.

Fenugreek seeds contain 0.5-2% diosgenin and small amounts of similar steroids, which are used in the synthesis of hormones for oral contraceptives and corticosteroids. T. corniculata (L.) L. which is occasionally grown as a vegetable, also contains diosgenin and may become an alternative source of it.

Long-continued selection in various parts of the Old World has led to the development of different regional forms, e.g. in India, Ethiopia and in the Mediterranean. These forms have been grouped into 2 subspecies, but a classification into cultivar groups and cultivars would be more appropriate.

Fenugreek is suitable for areas with moderate or low rainfall (500-700 mm per year) and is a sun-loving crop. It is fairly drought resistant. In warm climates it is usually grown as a cool season crop, while in temperate areas it is grown as a summer crop. Even where the winter is rather severe, it may be sown under cover in autumn, in this way tolerating frost to -15°C. Fenugreek prefers well-drained fertile loams or sandy loams, but grows fairly well on gravelly and sandy soils. It is not adapted to heavy clay soils. Moderately saline soils are tolerated, but not acid soils. The acceptable pH range is 5.8-8.2.

Fenugreek is propagated by seed. Deep ploughing and thorough harrowing are most important and the seedbed should be free from weeds. Seed is sown 1-2 cm deep at a distance of 7.5 cm within the row and 20-45 cm between rows. Alternatively, it may be broadcast at a rate of about 25 kg seed per ha. When grown irrigated, seed is broadcast rather thickly at a rate of 25-30 kg/ha and then stirred into the soil. In southern India, fenugreek is intercropped with coriander, sesame or chickpea.

Hair-root cultures grown from root tips in vitro with Agrobacterium rhizogenes have been tried as a method of sapogenin production. Initial results were promising, although the sapogenin content of the roots was only about 0.03 g per 100 g dry matter.

Competition from weeds is the most common problem in fenugreek cultivation and several weedings are required. It is not a demanding crop and can fix atmospheric nitrogen. For seed production fenugreek needs potash and phosphate fertilizers; when grown for fodder, nitrogen is also advisable. Inoculation with Rhizobium meliloti strain M1-1 in alluvial soils where fenugreek had not been grown before nearly doubled grain yield. Though the application of nitrogen and phosphate will increase seed production, the diosgenin content of the seed decreases with increasing applications. If rainfall is inadequate, a few irrigations are beneficial. Application of sodic irrigation water in light-textured sodic soil has been reported to reduce seed yield.

In fenugreek a root rot and wilt disease of unknown cause may result in some damage. In India fenugreek is often infested by the mite Tetranychus cucurbitae, resulting in no or poor fruit set. Aphis craccivora and Myzus persicae may also cause damage. Fenugreek is affected by various viruses and nematodes.

Fenugreek can be harvested for seed 3-5 months after planting by uprooting. Plants are hung upside down to dry in a warm shady place. In Gujarat (India), fenugreek grown as a leafy vegetable is harvested by clipping leaves and young shoots, and allowing the crop to regrow until the next harvest.

Fenugreek may yield 600-900 kg/ha of seed per harvest. In India fenugreek only grown as a seed crop produced up to 1675 kg/ha of seed, whereas seed yields dropped to 595 kg/ha after one leaf harvest 45 days after sowing. In Egypt, fenugreek planted in rows 20 cm apart produced a seed yield of 1.4 t/ha, while in the United Kingdom yields of 3.7 t/ha have been obtained.

Forage yields of 10-12 t/ha dry weight have been achieved in Canada, India and the United Kingdom.

A germplasm collection of fenugreek is maintained at the All-Russia Research Institute for Plant Breeding, St. Petersburg, Russia.

Breeding of fenugreek has been conducted, among others, for adaptation to stress, to increase the number of double pods per plant, to raise the ploidy level and to increase the yield of diosgenin.

Hybridization followed by pedigree selection is helpful in regularizing the meiotic behaviour and improving the vigour and seed fertility of fenugreek. Cultivars commonly used in experimental studies are "Kasuri”, "Pusa Early Bunching” and "UM 5”.

Fenugreek is not only an important spice but also a potential plant resource for herbal health products. As it produces diosgenin in a shorter period than Dioscorea spp. it may become an important alternative source. Although prospects for its cultivation in tropical lowland South-East Asia are not promising, research on its adaptation to highland conditions is worthwhile.