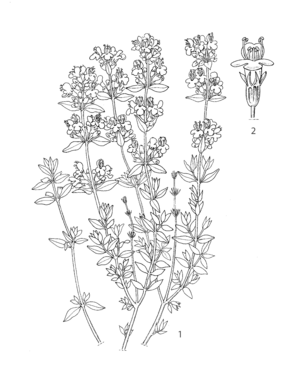 Note: the word "thyme” or combinations thereof does not refer exclusively to the botanical species T. vulgaris; the taxonomy of the genus Thymus L. is badly known and the word "thyme” in the literature can refer to a great number of different taxa.

Thyme originated from the European part of the Mediterranean (from Portugal to Greece) where it is also cultivated. At present it is cultivated worldwide in non-tropical regions (e.g. in most European countries, the Mediterranean area, Russia, Canada, United States, China and Japan), but occasionally also at higher altitudes in the tropics (e.g. in Java (Indonesia) and the Philippines).

Since ancient times the leaves and flowering tops of thyme have been used fresh and dried as a condiment and culinary herb, and the entire plant (excluding the roots) for the distillation of essential oil. Thyme honey is well known for its fine flavour and sweetness. Thyme is used to flavour numerous kinds of food, such as butter, cheese, fish, meat, olives, onions, pickles, sauces, soups, stews, stuffings and vinegar. The essential oil is used to scent perfumes and soap but also to flavour food. In the United States the regulatory status "generally recognized as safe” has been accorded to thyme (GRAS 3063) and thyme oil (GRAS 3064). The maximum permitted level of thyme oil in food products is about 0.003%.

Thyme has a long history in traditional medicine and has been reportedly used in bronchitis, catarrh-colic, diabetes, fever, sore throat, spleen disorders, uterine disorders and warts, and is considered antispasmodic, carminative and tonic. Thyme tea (1 teaspoon fresh leaves steeped in 1 cup boiling water) is believed to cure headache and tumours of the digestive tract, whereas thyme juice with vinegar is said to cure tumours and cancers. In Indonesia the fluid extract and syrup from the shoot are used traditionally as a cough medicine. The smoke of burning thyme is supposed to repel insects. The essential oil is a strong germicide, used as disinfectant and an antiseptic gargle and mouthwash but also as fungicide and insecticide.

Annual world production of thyme is estimated at 1500 t, mainly produced around the Mediterranean. Statistics are rare. In 1988 the United States imported more than 900 t unprocessed thyme valued at US$ 2 million (mostly from Spain) and 18 t of processed thyme valued at US$ 20 000 (mostly from Denmark). Annual production of thyme essential oil is estimated at 30 t, with a value of US$ 1.5 million, but this estimate refers to essential oils of several Thymus species (T. capitatus (L.) Hoffm. & Link, T. mastichina L., T. pulegioides L., T. vulgaris and T. zygis L.). For T. vulgaris alone the annual essential-oil production is estimated at 4 t.

Thyme oil itself is quite poisonous. Thymol has caused dermatitis in dentistry and when used in toothpaste. Thyme oil in bath preparations has been reported to cause hyperaemia and severe inflammation.

A monograph on the physiological properties of thyme oil has been published by the Research Institute for Fragrance Materials (RIFM).

Thyme oil is sometimes adulterated by the addition of terpenes and lowering of phenol content. If synthetic carvacrol is used it can be detected by non-crystallizable phenols.

Thyme can be grown as an annual or as a perennial. Flowering starts about 2-3 months after sowing and pollination is mainly by honeybees, but some self-pollination also occurs. In natural populations of T. vulgaris often more than 50% of the plants have functionally male-sterile flowers in addition to plants with bisexual flowers. Seed set is usually abundant. Commercial plantations are renewed after 2-3(-5) years because the crop tends to become woody, straggling and low-yielding.

Thymus is confined to the Old World and is taxonomically badly known. The estimated number of species ranges from 35-350 and this great divergence is due to the existence of numerous local Thymus taxa which some consider to be separate species, but others see as forms of complex large species. When growing under favourable conditions, most Thymus taxa have aromatic leaves and flowers and are used locally as a condiment, ornamental plant and for honey production. Only a few are grown commercially.

The major useful species (besides T. vulgaris) are mentioned below, but their identity needs better investigation:

T. vulgaris is very variable in shape of leaves, bracts and inflorescence and many subdivisions exist in the botanical literature. For the cultivated forms a classification into cultivar groups and cultivars would be most appropriate, but is only possible after a thorough revision of the species and its relatives. The species is extremely variable: there are cultivars with narrow, broad and variegated leaves, and cultivar group distinction may also be possible based on differences in the composition of the essential oils.

The natural habitat of thyme is the Mediterranean area, with hot, dry summers and cool, wet winters. Thyme grows at temperatures between 4-28°C, but optimally at 16°C. It is hardy to at least -15°C. It is drought tolerant but some supplementary water during dry periods is beneficial. In cultivation thyme prefers warm, sunny conditions with moderately fertile but well-drained soils such as sands or sandy loams, preferably slightly alkaline. In heavy, wet soils, thyme is short-lived and less aromatic. In South-East Asia it should be grown at higher elevations. Thyme is cultivated in the Philippines in the cool area of Cavite, about 600 m above sea-level.

Thyme seed can be stored for more than 6 years in airtight containers at 20°C with only slight loss of viability. Thyme is most easily propagated by seed, either directly in the field or in a nursery with later transplanting. The tiny seeds are covered with a thin layer of soil to avoid desiccation. Germination takes 2-3 weeks at 21°C. Plant spacing in the field is 10-15 cm between plants in the row and 20-25 cm between rows. If grown first in the nursery, young plants are ready for transplanting when they are 5-8 cm tall. Thyme can also be propagated vegetatively by cuttings, layering or root division.

Mulching of thyme is practised to control weeds, particularly in new plantings, and to help the crop to overwinter. Stem tips should be pruned regularly to encourage bushy growth. Thyme has been called the "poor man's herb”, because it can be grown in various soils without adding fertilizers. A moderate application of well-balanced fertilizer or composted manure is beneficial. If the crop receives additional irrigation, the soil should be allowed to dry between applications.

Thyme seldom suffers seriously from diseases and pests. A major problem can be caused by dodder (Cuscuta sp.) which sometimes overgrows thyme completely.

Thyme is harvested just before or during flowering, once during the first year of growth and 2-4 times in the succeeding years. Plants are cut 8-12 cm above the ground manually or mechanically. Cutting too low may cause plant death.

When intended for the fresh market, the harvested shoots of thyme are simply cooled and bunched or packed in polythene bags. The shoots can also be dried, either by spreading them thinly in trays with muslin or fine wire-mesh bottoms in a well-ventilated, shaded area to preserve the greyish-green colour, or by drying artificially at temperatures between 29-43°C. After drying, leaves and flowering tops are stripped from the stems and stored in polythene bags. For essential-oil distillation, fresh but dry material from which any woody and wilted parts have been removed should be used immediately after harvesting.

Breeding prospects for thyme are promising because of the natural high rate of male sterility and the ease of vegetatively propagating desired types. One of the breeding objectives is to obtain cultivars with a desirable essential-oil composition. The Mediterranean T. vulgaris consists of 6 chemotypes with different major monoterpenes. The nature of these monoterpenes is controlled by a series of loci, probably with dominant and recessive alleles. Epistatic relationships between these loci have been interpreted by assuming the terpenes as end-products of branches from the same biosynthetic pathway. The most dominant types, which correspond to the monoterpenes produced at the beginning of the chain, show the most important genetic diversity.

The demand for thyme is expected to grow faster than the demand for most other culinary herbs, particularly in the major European markets. However, the current market for dried herbs in general is not limited by supplies, and producers/exporters seeking entry will have to compete with traditional suppliers. Provision of a consistent high-quality product with good appearance can help newcomers in the trade to penetrate the market.