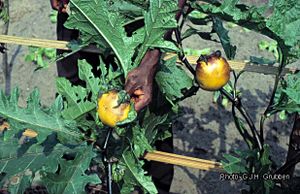 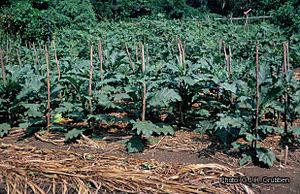 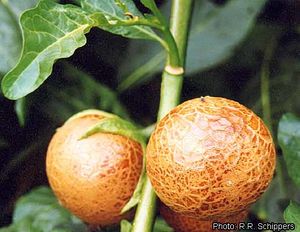 the typical cracked surface of fruits of the leafy type 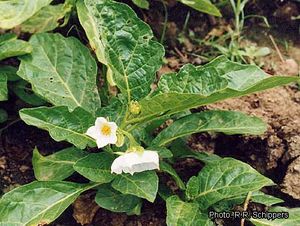 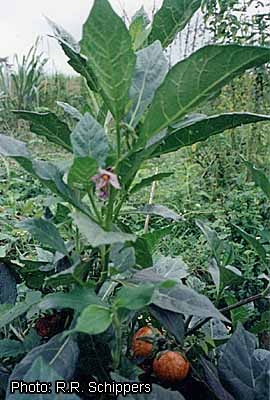 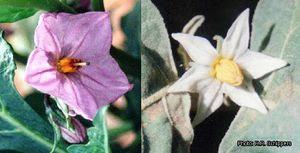 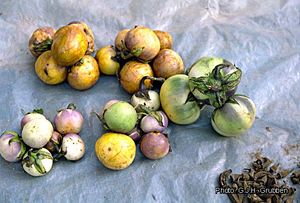 fruits on the market 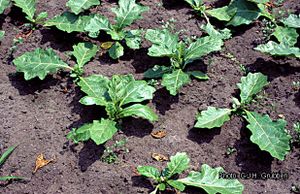 field, cultivation for both fruits and leaves

The genus Solanum comprises over 1000 species worldwide. In Africa and adjacent islands it is represented by at least 100 indigenous species; about 20 of these are recent introductions. Solanum macrocarpon has an African ancestry. Spiny wild forms are found throughout the tropical non-arid parts of Africa, their fruits still being gathered occasionally as vegetable, whereas the cultivated forms, called ‘gboma’ in West Africa, constitute an important fruit and leaf vegetable, grown for the market and in home gardens. Local cultivars grown for the leaves are common throughout West and Central Africa, while the fruit types are mainly restricted to the humid coastal areas of West Africa. Gboma has been recorded in many West African countries and probably occurs in all coastal countries. It is also widespread in Central and East Africa. In southern Africa it has been recorded as a vegetable in Malawi, Zambia, Zimbabwe and Mozambique. Several fruit cultivars can also be found in South America (Suriname) and the Caribbean, apparently introduced from West Africa, the local name in Suriname being ‘ndrowa’ (’ndrowa’ is the name of certain types of Solanum aethiopicum L. in Côte d’Ivoire). It has been reported from Thailand and Indonesia, but this is probably erroneous and concerns a different species.

The young leaves and young fruits are cooked and consumed as a vegetable. The leaves are eaten as a separate dish or in sauces together with other ingredients. The taste is more or less bitter and very much liked. The leaves can either be steamed (as practised in Uganda) or fried in oil with onions. In West Africa both leaves and fruits are eaten. A popular cultivar in Benin is a small-fruited leaf type, whereas in Côte d’Ivoire a big-fruited type grown for its fruits is popular. In Uganda it is mostly the leaves that are eaten, but the fruits are added to sauces.

The leaves, fruits and roots have a variety of medicinal uses. In Sierra Leone heated leaves are chewed to treat throat troubles; in Nigeria fruits are taken as a laxative, and to treat cardiac diseases, while flowers and fruits are chewed to clean the teeth; in Kenya the juice of boiled roots is drunk to get rid of hookworms, while crushed leaves are taken to treat stomach troubles. Solanum macrocarpon is occasionally grown as an ornamental.

Leaves and fruits of gboma are common market vegetables in many African countries, but statistics on production and trade are not available. There is some export of gboma fruits from Senegal and Uganda to European markets (Paris, Brussels). In the Caribbean (Santo Domingo) and Suriname gboma fruits are produced for export to the United States and Europe (Amsterdam).

Several cultivars of Solanum macrocarpon are cultivated e.g. in Ghana, where they are mainly grown for their fruit and less so for their leaves. The names given to these cultivars are either those under which they were known by farmers or named after the village where they were found. Fruits and leaves of ‘Gboma’, ‘Mankessim’, ‘Akwaseho’ and ‘Kade’ are consumed, whereas of ‘Sarpeiman’ and ‘Bui’ only fruits are eaten.

Gboma seeds are orthodox and if kept dry and cool will maintain a high viability for several years. However, if kept at room temperature and high air humidity, viability is lost in a few months. Germination starts about a week after sowing. Flowering starts 2–3 months after germination. Cultivars grown in savanna areas flower earlier than those in high-rainfall areas and are more tolerant to drought. The crop is mainly self-pollinated. It has low levels of out-crossing, which is mainly done by bees and other pollinating insects. Flowers open early in the morning when it is still dark. The stigma is receptive some hours before the flowers open and remains receptive for about two days. Fruits are ready for picking 3–4 weeks after fruit set. Fruits take about 10 weeks to ripen and seeds should be collected from fruits, which are physiologically ripe.

Most leafy cultivars grow in high-rainfall areas of West and Central Africa. An exception is a group of cultivars with small leaves and fruits, found in the semi-arid and savanna areas of Northern Ghana, Burkina Faso and neighbouring countries. Fruit cultivars are restricted to the humid coastal areas from Côte d’Ivoire to Nigeria and also along the East African coast. Gboma requires warm conditions and is only occasionally found at high altitudes, e.g. in Cameroon. At high altitudes, plants are sturdy and their growth rate is slow.

The 1000-seed weight is about 1.7 g. Seeds are sown in a nursery and are spaced at 20 cm between the rows. Presoaking of seeds in hydrogen peroxide for 24 hours generally improves germination. Seedlings of leafy cultivars are transplanted after 4–6 weeks at a spacing of 50 cm × 50 cm. The spacing for fruit cultivars is about 1 m × 1 m. Fruit cultivars require more frequent watering than the leaf cultivars as drought causes seeds to develop faster making the fruits unsuitable for consumption. When preparing beds it is recommended that NPK 15-15-15 fertilizer be added at a rate of 80–100 kg/ha.

Commercial growers normally practise monocropping. For subsistence cultivation, farmers grow their landraces in home gardens as a sole crop or intercropped with other food crops like maize and cassava. Gboma responds well to NPK fertilizer and animal manure. When the crop is grown for its leaves, it is trimmed when about 20 cm tall to promote the production of new shoots. Abundant fruit production also follows trimming.

Certain cultivars are resistant to Cercospora solani, Thielaviopsis basicola (damping-off disease), Leucinodes orbonalis, Trialeurodes vaporariorum (whitefly), Amrasca biguttula (leaf hopper), and highly tolerant to Tetranychus urticae (spider mite) and Fusarium wilting. Cultivars having fruits with a tough calyx cover and high phenolic content are more resistant to fruit borers than those without. It was observed that gboma completely resisted shoot infestation of Leucinodes orbonalis, performing better than Solanum incanum L., which is well known for its resistance to this pest.

Leaf harvest starts 6–9 weeks after transplanting, usually about a week after flowers have appeared. The leaves are harvested periodically and depending on the availability of water the crop continues to produce for up to a year. The whole shoot with the terminal bud and occasionally the flowers is picked. Subsequent harvests are made every two weeks and consist of side shoots. Where fruits are eaten, they are picked when still unripe, 2–4 months after sowing. Ripe fruits are harvested one month later for seed.

An average leaf yield of 2.9 kg/m2 with a crop spacing of 50 cm × 50 cm has been recorded in Nigeria. Cultivars with early regrowth are most suitable for high yields as a leaf vegetable. Leaves can be harvested for several seasons from regrowths but a new crop gives the best yield. In Senegal the cultivar ‘Newubaar’ has given 1.5 kg of fruits per plant in 4 months. Regular leaf harvesting decreases the fruit yield.

Fresh leaves and fruits are easily transported and can be kept in good condition for some time, especially in shady or cool places. Sprinkling with water helps to keep the leaves fresh. Gboma leaves are sometimes preserved by sun-drying, but Aspergillus species and other storage fungi may develop on stored leaves. The dried product is broken into small pieces or ground to powder and used in soup. Fruit cultivars with a soft skin are preferred; they are easy to cook, but they do not travel well. Cultivars with a tough skin are easily transported and can be stored up to two weeks.

Local landraces are presently not at great risk of genetic erosion. National research institutes in Nigeria and Ghana maintain germplasm of Solanum macrocarpon. Since 1980, the International Plant Genetic Resources Institute (IPGRI) has organized Solanum species collecting missions in West Africa (Benin, Burkina Faso, Côte d’Ivoire, Ghana and Togo) and materials have also been collected from many other African countries including Nigeria, Uganda and Zimbabwe. A collection was held at the University of Birmingham (United Kingdom). Recently this material has been transferred to the University of Nijmegen (Netherlands).

In most African countries gboma is considered to be a minor crop, except in Nigeria, and therefore research to enhance the germplasm potential is scarce. Cultivar development work started in 1998 in both Cameroon and Ghana. The tremendous variability in the species, embracing the wild ancestor Solanum dasyphyllum, semiwild forms and cultivars from both humid and dry areas, offers a good opportunity to the breeder to improve the crop, e.g. for disease resistance.

Gboma with its slightly bitter taste is liked by consumers. The high nutritive value of the leaves and the high leaf and fruit yield, as well as the fairly high resistance to pests and diseases make the crop interesting for development. The leafy cultivars have potential for introduction in semi-arid areas to improve the nutritional status of the population. The fruity cultivars have potential for promotion in hot humid areas. The considerable variation within the species gives it high potential for breeding for various purposes. Development of the export market will require uniform cultivars and putting in place a good system of post-harvest handling.