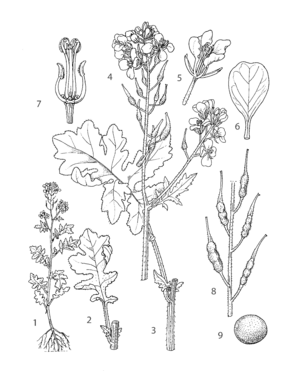 Sinapis alba originates from the eastern Mediterranean and the Middle East. It is grown for seed worldwide, production being important in Canada, Scandinavia and Hungary.

The use of S. alba as a spice and medicine dates back to ancient Middle Eastern, Greek and Indian civilizations. The seed of S. alba is one of the main sources of condiment mustard, also named table mustard when produced for domestic purposes. German or Dutch mustard is made by adding vinegar to a coarsely ground mixture of brown mustard (Brassica juncea (L.) Czernjaew) or black mustard (B. nigra (L.) Koch) seeds (contributing the pungent principle) and white mustard seeds (contributing the hot principle). It has a milder taste than French mustard made from B. juncea or B. nigra seeds alone. In Europe and northern America, mustard used to be prepared in the home by rolling a special metal ball in a bowl of mustard seed and then mixing vinegar into the resulting crushed seed. Other herbs may be added according to taste and tradition and, for a milder taste, sugar, honey or starchy substances. There are numerous manufacturers' recipes. In cooking, mustard is mainly used to flavour meat dishes and sauces for meat, fish, salads, and snacks. Whole seeds of white mustard are used in the preparation of pickles and sauerkraut and to spice marinades for fish. The regulatory status of white mustard in the United States is "generally recognized as safe” (GRAS 2761).

The fatty golden-yellow oil pressed from the seed is incorporated in mayonnaise and also used as lubricant and illuminant. The seedlings (mustard sprouts) are eaten raw in salads and sandwiches. Leaves are occasionally used as a potherb. In temperate climates S. alba is widely used as a late-sown green manure crop. Some cultivars decrease beet cyst nematode populations in the soil.

The seeds are used as a diaphoretic, diuretic, emetic, expectorant, irritant and stimulant. The seed oil is taken both internally and applied externally to treat tumours. Tea prepared from the seed is used to cure sore throat and to relieve bronchitis and rheumatism.

In world trade the mustards combined are by far the most important spice in volume, while in value they are second only to black pepper (Piper nigrum L.). Seed of B. juncea and S. alba account for about 40% and 60% respectively of the world mustard trade.

The major consumers of condiment mustard are the United States, Germany, France and the United Kingdom. Production of condiment mustard in Western Europe in 1985 was about 130 000 t, with consumption per head ranging from 0.3 kg (United Kingdom) to 1 kg (France). In 1994 216 000 t were produced in Canada on about 200 000 ha, about half of the mustard crops being white mustard. White-mustard seed fetches about US$ 650 per t. In the United States the annual production is about 6000 t, valued at US$ 1.4 million.

Cruciferous plants are characterized by a range of glucosinolates or mustard-oil glucosides contained in the seeds and other tissues. The enzyme myrosinase also occurs in the tissues but only comes into contact with the glucosinolate when the tissue is damaged. Glucosinolates release volatile or oily isothiocyanates, through the action of myrosinase in the presence of watery substances. The glucosinolate of white mustard, called sinalbin, releases the mildly irritant, oily p-hydroxybenzyl isothiocyanate.

The glucosinolate content of the seed is about 140 μmol/g. Per 100 g edible portion seeds contain: water 5 g, protein 26 g, fat 36 g, carbohydrates 23 g, fibre 5 g, ash 4 g (Ca 0.4 g, P 0.6 g, Fe 21 mg), β-carotene equivalent 0.6 g, thiamine 0.4 mg, riboflavin 0.31 mg, and niacin 7.3 mg. Since the whole seed is used, condiment mustard is in fact quite a complete and nutritious food. The many medicinal properties should therefore not always solely be attributed to the quite overwhelming action of the isothiocyanates.

The oil of white mustard is rich in erucic acid, which is not appreciated in food oils but has several industrial applications.

Seed of wild mustard or charlock (Sinapis arvensis L.) has occasionally been used as an adulterant in poor-quality condiment mustard. Its brittle seed-coat may cause difficulties in milling.

White mustard seed germinates immediately upon sowing, and then grows rapidly. Four stages can be recognized in the development of mustard crops. The seedling stage, lasting 7-10 days in which the aboveground plant consists of a hypocotyl and 2 green cotyledons, is followed by the vegetative stage of 3-4 weeks in which the plant develops a basal rosette of leaves. During the flowering stage the plant bolts, rapidly producing an indeterminate raceme with branch racemes opening 4-5 flowers per day for 3-4 weeks. The final seed-filling stage lasts 4-8 weeks and is terminated by senescence of the pods and plant. Pollination is by insects, e.g. various bee species and pollen beetles such as Meligethes spp. Because of the non-shattering nature of the fruit, the chance of white mustard developing into a weed is small.

There is some confusion in the literature about mustards. Botanically, 4 species are involved:

Similar to the closely related Brassica crops, white mustard favours moderate temperatures for germination and early growth, and long days and high temperatures for flowering and seed-set. It requires high levels of N and grows best on sandy loamy soils. It does well in the conditions prevailing in the Canadian prairies where most of the commercial seed is produced. It occurs in areas where the annual precipitation ranges from 350-1800 mm, annual temperatures from 5-25°C, and soil pH from (4.5-)5.6-8.2.

When selecting fields for growing white mustard, those infested with the weeds wild mustard (Sinapis arvensis L.), cow cockle (Saponaria hispanica (Miller) Rauschert), cleavers (Galium aparine L.) and volunteer Brassica crops should be avoided, as their seeds may spoil the quality of the mustard seed.

S. alba is propagated by seed. The robust seed will even grow in a poorly prepared seedbed. Seeds may be sown about 1 cm deep in rows 30 cm apart, or broadcast at a rate of about 12 kg/ha.

The crop should be weeded until it has established. Nitrogenous fertilizer should also be provided at planting. Soil levels of P and K are usually adequate. White mustard is often grown as a break crop in rotations dominated by cereals, as its production can be fully mechanized, using the same equipment as for cereals.

The crop is not known to suffer from major diseases, but it attracts a variety of insect pests, including flea beetles (Phyllotreta spp.) and aphids (e.g. Brevicoryne brassicae). Effective insect pest control can be achieved by using resistant cultivars, appropriate agronomy, crop rotation disinfected seed.

In some years the yeast Nematospora sinecauda is an important disease of stored grain. Severe infestation renders the seed unsuitable for human consumption. The yeast infection is initiated by the false cinch bug (Nysius niger), but spreads easily in stored grain. As few insects are involved in the initial infection, the only preventive action possible is to control the alternative host flixweed (Descurainia sophia (L.) Webb ex Prantl, synonym: Sisymbrium sophia L.).

The crop is ready for harvesting 70-110 days after sowing, but in Europe long-duration crops that take up to 180 days to mature and give higher yields are grown. Fruit ripening starts at the base of the inflorescences and proceeds upwards. Since fruits do not shatter, the crop can be harvested late. It is usually combine-harvested.

Threshing is only possible when the plants are thoroughly dry. The seed is sacked up together with an amount of husks to reduce relative humidity, which is important in controlling storage insects. The seed stores well.

Both dry and wet-milling processes are applied in industrial processing of mustard seed. In dry milling the seed-coat is usually partly removed (except in Japan), in wet milling the seed-coat of white mustard is usually left in the product. The variety of mustards produced is enormous, ranging from traditional cottage-industry products to newly designed "regional” products for the tourist trade and to formulations which incorporate ingredients such as horseradish, beer, whisky or lemon peel. It is said that a new mustard product is launched on the United States market every week.

Germplasm collections are available at the national gene banks of the United States, Canada and the Netherlands. S. alba is cross-fertilizing and requires a recurrent population improvement breeding scheme to develop populations with improved ecological adaptation, but with a broad genetic variation for further improvement. This procedure has been successfully employed to develop a cultivar low in erucic acid. Breeding for improved levels of resistance to the beet cyst nematode and increased green-manure production is following the same method.

World consumption of mustard is slowly expanding and the present production centres will be able to increase supplies gradually. Prospects for production in South-East Asia seem limited to areas with a cool season with long days.