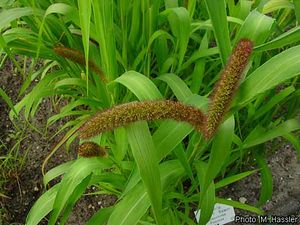 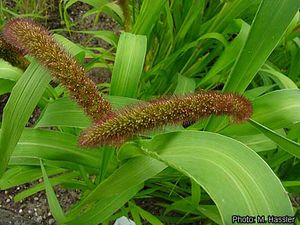 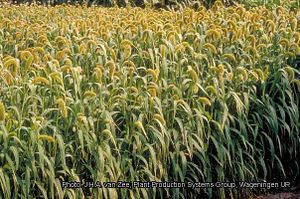 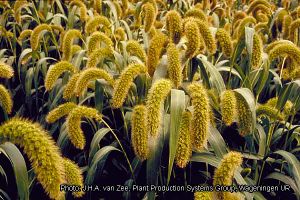 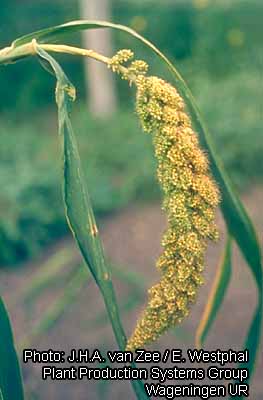 Foxtail millet is an old crop, grown since 5000 BC in China and 3000 BC in Europe. It probably evolved from the wild Setaria viridis (L.) P.Beauv. (green foxtail millet), and it was most probably first domesticated in the highlands of central China, from where it spread to India and Europe soon thereafter. Evidence for this origin, however, is not conclusive and its domestication may have taken place anywhere in the area extending from Europe to Japan, perhaps even several times independently. Foxtail millet was the ‘panicum’ of the Romans. At present foxtail millet is cultivated all over the world. In tropical Africa it is cultivated to a limited extent in upland areas in East Africa and occasionally recorded elsewhere, e.g. in Cameroon and southern Africa (Malawi, Zimbabwe, Mozambique). In these areas it also occurs as an escape. Foxtail millet is also grown in South Africa and Lesotho.

The husked grain of foxtail millet is used as food in Asia, south-eastern Europe and Africa. It is most important in China and India. The grain may be cooked and eaten like rice, either entire or broken. It can be ground and made into unleavened bread or, when mixed with wheat flour, into leavened bread. The flour is also made into cakes, porridges and puddings. In northern China foxtail millet forms part of the staple diet; it is usually mixed with pulses and cooked, or the flour is mixed with that of other cereals in the preparation of bread and noodles. It is considered a nutritious food and is often recommended for the elderly and for pregnant women. Since the 1990s it has been used in China for the industrial preparation of mini crisp chips, millet crisp rolls and flour for baby foods. Foxtail millet is used in the preparation of beer and alcohol, especially in Russia and Myanmar, and for vinegar and wine in China. Sprouted seeds are eaten as a vegetable, e.g. in China.

In Europe and the United States foxtail millet is primarily grown as bird feed. It is an important fodder crop (‘moha’); in the United States and Europe it is grown for hay and silage, and in China the straw is an important fodder. The straw is also used for thatching and bedding, e.g. in India. The bran serves as animal feed and can be used for oil extraction. Foxtail millet is credited with diuretic, astringent and emollient properties and is used to treat rheumatism. It can be sown in contour strips for erosion control.

Setaria comprises about 100 species distributed in the tropics, subtropics and temperate regions. Foxtail millet is the most economically valuable species of the genus. Several wild Setaria species are harvested for their seeds, e.g. Setaria finita Launert in Namibia. Setaria sphacelata (Schumach.) Stapf & C.E.Hubb. ex M.B.Moss is cultivated as a forage throughout the tropics and its grains are gathered as a famine food in Africa. The grains of Setaria pumila (Poir.) Roem. & Schult. are also eaten as a famine food, e.g. in Mali, Burkina Faso, Sudan and Ethiopia, but it is more important as a forage. Setaria verticillata (L.) P.Beauv. is a forage plant, but also collected as a famine food, e.g. in Niger, Sudan and Namibia.

Setaria italica is a ‘crop-weed complex’, i.e. with wild and cultivated types. These types show no crossing barriers and isozyme analysis and molecular studies have confirmed their similarity. The wild types are considered to represent Setaria viridis (green foxtail millet), the cultivated ones Setaria italica (foxtail millet).

Green foxtail millet occurs worldwide as a variable, annual weed, especially common in temperate regions. It differs from foxtail millet in its completely caducous spikelets, upper glume about as long as the spikelet and more roughly papillose lemma. It is sometimes considered a subspecies of Setaria italica: subsp. viridis (L.) Thell. It is also known as green bristle grass, and is one of the world’s most noxious weeds, but it is sometimes used as fodder or for medicinal purposes.

Foxtail millet generally starts flowering at about 60 days after sowing, and flowering lasts for 10–15 days. Flowering proceeds from the top of the panicle downward. The flowers open late at night or early in the morning, and close soon after opening. Foxtail millet is largely self-pollinating with an average outcrossing rate of 4%; natural hybrids between wild and cultivated types occur. Total crop duration is 80–120 days, although some cultivars only need 60 days to mature. Foxtail millet has largely lost the ability of natural seed dispersal, and shows a tendency toward uniform plant maturity. Foxtail millet follows the C4-cycle photosynthetic pathway.

Foxtail millet is primarily a crop of subtropical and temperate regions; in the tropics it is grown up to 2000(–3300) m altitude. It does not tolerate frost. In China and India it is mainly grown in areas with an annual rainfall of 400–800 mm. Foxtail millet is not particularly drought-resistant, but its short crop cycle makes it suitable for low-rainfall areas and it can be grown in semi-arid regions with rainfall less than 125 mm in the 3–4 months of growth. It is, however, susceptible to long periods of drought. Flowering is normally accelerated by short days, but day-neutral cultivars exist. Foxtail millet prefers fertile soils with a pH of about 6.5, but can be grown successfully on a wide range of soils, from light sands to heavy clays, and even yields reasonably well on poor or marginal soils. It does not tolerate waterlogging.

Foxtail millet is propagated by seed. The 1000-seed weight is about 2 g. Dormancy is common in freshly harvested seed. The recommended seed rate for sole cropping in Kenya is 4 kg/ha, with a distance of 30 cm between rows and 10 cm within the row. In China and India it is sown at a seed rate of 5–15 kg/ha when grown in pure stands, with plant densities of 300, 000–1.5 million plants/ha. It is either broadcast or drilled in rows 20–60 cm apart, with 5–20 cm within the row, and thinning may be practised. The usual sowing depth is 3–6 cm and a fine, firm seed-bed is required. Foxtail millet is grown as a sole crop or intercropped, e.g. with finger millet, cotton, sorghum or pigeon pea in India.

Foxtail millet is harvested manually by cutting off the panicles and threshing them. Mechanical harvesting with a combine or binder is possible. In southern India whole plants may be cut and threshed by trampling by cattle or by passing a stone roller over the plants. When grown for fodder, foxtail millet should be harvested before flowering.

The average annual yield of rainfed foxtail millet is 800–900 kg/ha of grain and 2500 kg/ha of straw. Improved cultivars in China yield 1800 kg/ha of grain in regions with less than 900 mm annual rainfall. Much higher grain yields can be obtained with irrigation (in China experimental yields have reached 11 t/ha). As forage it may yield 15–20 t green matter per ha or 3.5 t hay.

Foxtail millet should be dried thoroughly before storage. The grain is usually husked just before processing because husked grains are readily infested with insects. Husking can be done with a stone roller or with rice milling machinery. In China mini crisp chips are made by cooking husked grains, pressing the product to 1 mm thickness, drying, frying in oil and flavouring. Crispy rolls are prepared from husked grains which are soaked in water, ground and, after addition of sugar, toasted between 2 iron plates and formed into rolls.

Foxtail millet breeding is mainly carried out in China and India. Major breeding objectives are developing high-yielding cultivars which produce protein-rich seed and are resistant to diseases, pests and lodging, and adapted to local ecological circumstances. In China, for example, cultivars with a short growing cycle and a high drought and cold tolerance have been developed; these can be grown in the summer season after winter wheat. The recommended cultivar in Kenya is ‘KAT/FOX-1’; it matures in 3–4 months. Techniques applied in foxtail millet breeding include selection, hybridization (using male-sterile lines) and radiation-induced mutations. Due to the floral morphology (very small flowers) and flowering behaviour of foxtail millet, artificial cross-pollination is difficult, but an effective procedure for artificial hybridization of foxtail millet has been developed in the United States. High levels of heterosis for grain yield (67%) and panicle length (68%) have been found.

On a worldwide scale foxtail millet has lost its importance as a food crop in competition with major cereals such as wheat, rice, maize and sorghum. However, because of its short crop cycle and the fact that it can be grown on a wide range of soil types it may remain a useful crop in Asia on poor agricultural land in regions with low rainfall or a short growing season. The prospects for foxtail millet in tropical Africa seem limited, but it may gain importance as a niche crop in dry regions at medium to high altitudes.