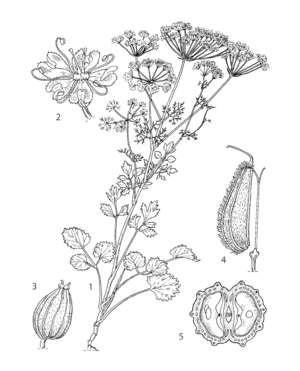 Anise probably originated in the eastern Mediterranean region. It is known to have been used by the ancient Egyptians about 1500 BC; the Greeks and Romans also used it. Later on it was brought to India via Persia. Anise fruits, which are known in the spice trade as "seeds”, found their way to China (Canton) in 1200 AD through a shipment from Java; the fruits had not been produced in Java but had come from much farther west. Anise is cultivated nowadays in a wide range of countries, especially in southern Europe (in particular Spain and Italy), the former Soviet Union, Bulgaria, Romania, Turkey, Iran, northern Africa, India, China, Japan, Chili, Argentina and Mexico, and is often naturalized. Anise fruits are used in South-East Asia, but the crop does not grow satisfactorily in tropical lowlands. Only very occasionally is anise grown in South-East Asia.

Anise fruits, either whole or ground, are used as a spice. They flavour curries, sweets, confectionery and baked goods, and are an ingredient of various alcoholic drinks or beverages, e.g. anisette of France, "raki” of Turkey, "aguardiente” of Latin America and "anisado” of the Philippines. The leaves are used for flavouring and garnishing. In the Netherlands sugar-coated anise seeds are given to guests visiting a new-born baby.

The fruits yield an essential oil, which is increasingly replacing the fruits. The odour is not only attractive to humans, as is evidenced by its use as a lure for fox hounds and as a bait for mice, rats and fish. The oil is also applied in perfumery, soaps and other toilet articles, as a sensitizer for bleaching colours in photography and as an insecticide against small insects. The residue left after essential oil distillation may serve as cattle feed. In the United States the regulatory status "generally recognized as safe” has been accorded to anise (GRAS 2093) and anise oil (GRAS 2094).

Anise fruits are considered stomachic, carminative, diaphoretic, diuretic, antispasmodic, antiseptic, stimulative and galactagogue. In Malaysia, anise fruits are an ingredient of compound medicines against stomach-ache or colic, for instance together with leaves of Blumea balsamifera (L.) DC. or Cajanus cajan (L.) Millsp. They are also used in Malaysia in a tonic taken after childbirth, and, together with Phyllanthus leaves, they have been recommended against gonorrhoea. In Thailand, anise is considered antipyretic, and it is a remedy against morning sickness.

On the international market, anise is classified as one of the "spice seeds”. Since it is lumped together with the other spices in this category, specific production and trade statistics are not available. In 1976-1980, estimated world trade of all spice seeds ranged from 44 000-53 000 t annually, valued at US$ 35-65 million.

In the 1980s, the annual production of anise oil was estimated at 40-50 t. The main exporting countries were the former Soviet Union, Spain and Poland, whereas France was the main importer.

The essential oil of anise, derived from the fruits, is a colourless or pale yellow, strongly refractive substance, liquid at temperatures above 20°C, with the characteristic odour and sweet taste of the fruit. Anise oil is traditionally used with liquorice (Glycyrrhiza glabra L.) in liquorice candy. As a result, the flavour of anise is often confused with that of liquorice and erroneously described as liquorice-like.

The oil yield varies with the method of extraction: 1.9-3.1% for hydrodistillation, 2.3% for hydrodiffusion and 4.3-5.1% for C02 extraction. The essential oil consists primarily of phenols and derivatives 90-95%, hydrocarbons 2-5%, and less than 1% each of alcohols, carbonyls, acids and esters. The oil contains 80-95% (E)-anethole which is the character-impact compound, and up to 5% methyl chavicol (estragole). (Z)-anethole, which has toxic properties, is also found, but usually at concentrations below 0.2%. Also present are oxidation products of the anetholes, including anisic alcohol, anisaldehyde, anisic acid, anethole epoxide, p-methoxyphenylacetone and p-methoxypropiophenone. The presence of the oxidation products may be an indication of oil deterioration. Anise is reported to contain coumarins, flavonoid glycosides, β-amyrin, sitosterol and myristicin.

Anise oil can cause skin irritation and induce nausea, seizures and pulmonary oedema. Anethole has been reported as a cause of dermatitis. Long-term studies have shown that anethole is not carcinogenic. Methyl chavicol (estragole) is a hepatic carcinogen in mice. The reputed oestrogenic activity of anise, e.g. increasing milk secretion and promoting menstruation, is probably due to polymers of anethole, such as dianethole and photanetholes.

A monograph on the physiological properties of anise oil has been published by the Research Institute for Fragrance Materials (RIFM).

Anise fruits are adulterated with exhausted fruits (after distillation), dust and other similar-looking fruits and seeds. Ground anise is adulterated with ground fennel (Foeniculum vulgare Miller).

The oil from P. anisum is used interchangeably in the United States with that of star anise (Illicium verum Hook.f.), both under the name "anise oil”. Although this has become accepted practice, it has also been stated that the former is superior to the latter, which has a harsher odour. Synthetic anethole isolated from sulphate terpentine, and oil of fennel are occasionally added as adulterants.

In anise the time from sowing to seed ripening is 4-5 months. Germination normally takes 17-25 days. Initial growth is slow: 35-40 days from germination to stem emergence. Flowering normally starts 65-75 days after germination, whereas the duration of flowering and seed development is 20-25 days. Experiments done in Turkey with several provenances, however, showed that the time from sowing to flowering varies, depending on sowing date. The range was from 88-102 days (plants sown in March) to 175-200 days (plants sown in November), indicating that anise requires a long photoperiod for flowering. The ripening of seeds is uneven. Anise is cross-pollinated by insects.

The herb P. anisum, anise (family: Umbelliferae), should not be confused with the Chinese star anise tree, Illicium verum Hook.f. or the Japanese star anise, I. anisatum L. (family of both: Illiciaceae).

Certain cultivars of fennel (Foeniculum vulgare Miller) are confusingly called "anise” or "sweet anise” because of their anise taste.

The genus Pimpinella L. comprises about 150 herbaceous species, most of them native in Eurasia and northern Africa. In Malesia 4 species are known, of which P. pruatjan Molkenb. has aromatic roots.

Anise can be grown in temperate and subtropical climates, but does not grow well under tropical lowland conditions. It requires a frost-free growing season of about 120 days. It grows under conditions ranging from 1000-2000 mm average annual rainfall and mean annual temperatures of (6-)12-18(-24)°C. Moisture requirements are highest in the period from stem emergence to flowering. Temperature and rainfall should be rather uniform, because anise is unfavourably affected by sudden changes in both. Anise can be grown in a wide range of soils, from sandy to clayey loams with a pH of 5-8, but it thrives on well-drained, moderate to heavy loams with adequate water-holding capacity. Sandy soils and heavy clay soils are unsuitable.

Anise is propagated by seed, which is drilled in rows or broadcast. Direct sowing is recommended, because seedlings are harmed by transplanting. Germination is facilitated by soaking the seed overnight in water before sowing. Seeds remain viable for 1-3 years. Prior to sowing, the soil is often ploughed and harrowed to obtain a fine seedbed. When anise is grown in rows, seeds are sown 1-3 cm deep, 15-90 cm between rows and 2.5-15 cm apart in the row. In experiments in Pakistan, rows 40 cm apart gave higher seed yields per ha than rows 20 or 30 cm apart or than broadcasting. The higher yield was attributed to more vigorous vegetative growth and more umbels. At 30 days from sowing or when seedlings are 5-8 cm tall, they are thinned to 10-30 cm between plants. Seed rates range from 6-15 kg/ha. The crop is sown in October-November in northern India, and in March-April in Europe.

At present, the use of cell cultures is only of importance for the elucidation of biochemical pathways and not for the economic production of essential oil or anethole. The amount of essential oil in both callus culture (3-4 mg/100 g fresh weight) and suspension culture (1-2 mg/100 g fresh weight) is 1000 times less than that of anise fruits. Anethole and myristicin have been detected in undifferentiated cultures, but the amounts are variable, and sometimes neither are found; however, epoxy-pseudoisoeugenol-2-methylbutyrate (EPB) and β-bisabolene are always found. Leaf-differentiating callus cultures have been found to accumulate high amounts of EPB, some anethole and pseudoisoeugenol-2-methylbutyrate, whereas root organ cultures accumulate EPB, but no anethole and only traces of pseudoisoeugenol-2-methylbutyrate.

Because of the slow germination and initial development, weed control is of major importance in anise growing, especially when the crop is broadcast. The presence of weeds at harvest time is likely to reduce product quality.

Adequate nutrient supply is also essential. The crop uptake needed to produce 100 kg of fruits is 3.5 kg N, 1.5 kg P2O5 and 4 kg K2O; most of this is taken up in the period from stem emergence to flowering. Anise can be staked as plants mature, to support the tops heavy with fruits.

Anise is sensitive to bacterial attack. In India, fruit-bearing anise may be severely infected with Trichothecium roseum, a fungus producing toxins which, if ingested over a prolonged period, may cause neurological disorders in humans.

Anise fruits are ready for harvest when they turn greyish-green. The uneven ripening of the fruits, which starts on the main stem and continues later on the side branches, leads to a dilemma: early harvesting will yield immature fruits of low quality, but late harvesting results in shattering of the fruits. Thus, two harvests may be desirable, though this is more expensive in terms of labour costs. In practice, anise is harvested when 80-90% of the fruits turn greyish-green or when the fruits in the main umbel are completely ripe.

Harvesting is done by pulling the plants or cutting off the tops. Large areas are combine harvested, but garden plots are harvested by hand.

Harvested and bundled tops of anise are stacked up to 2 m high in the field with the fruiting heads toward the centre and left there for 4-5 days for further drying and fruit ripening. The moisture content of the fruits should have fallen to 10-12% before they are threshed, cleaned and stored in jute bags lined with polythene in a cool, dry place. Storage is difficult, because the essential-oil content decreases rapidly. It is therefore recommended to store fruits in airtight containers in a cool and dark place.

For the extraction of anise oil, fruits should be crushed first and distilled immediately to reduce oil loss due to evaporation.

Small germplasm collections are available in most countries where anise is grown. Some larger collections are at the Plant Genetic Resources Department of the Aegean Agricultural Research Institute in Menemen, Izmir, Turkey (85 accessions), at the Gene Bank of the Institute for Plant Genetics and Crop Plant Research in Gatersleben, Germany (20 accessions) and at the Institute of Plant Introduction and Genetic Resources "K. Malkov”, Sadovo, Bulgaria (10 accessions). There are no known breeding programmes. However, several cultivars are available.

It might be feasible to crop adapted anise cultivars in highland areas of South-East Asia for import substitution and perhaps export. If anise truly requires long photoperiods for flowering, the prospects for growing anise in South-East Asia are limited, however.