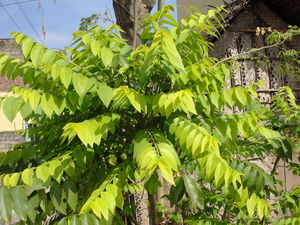 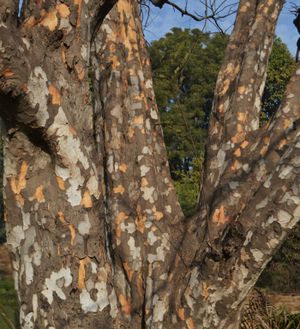 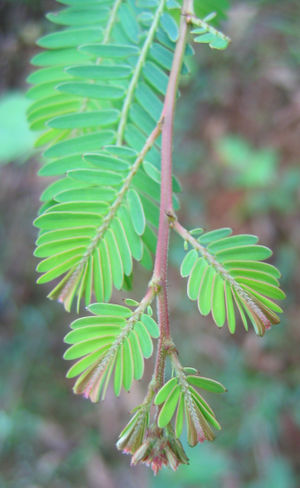 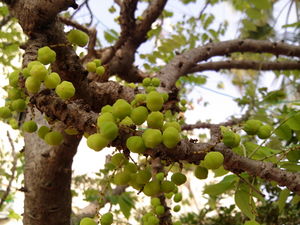 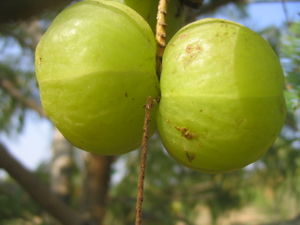 Phyllanthus emblica is indigenous to a large area ranging from Nepal, India and Sri Lanka, throughout South-East Asia to southern China. It is widely cultivated for its fruits throughout its natural area of distribution, particularly in India, and also in the Mascarene Islands (Réunion, Mauritius), the West Indies and Japan. Formerly it was cultivated in Madagascar.

The leaves of Phyllanthus emblica are employed for dyeing matting, bamboo wickerwork, silk and wool into brown colours. Grey and black colours are obtained when iron salts are used as mordants. Matting can be dyed dark colours with a decoction of the bark. The fruits are used to prepare a black ink and a hair dye. Immature fruits, bark and leaves are used for tanning in India and Thailand, often in combination with other tanning materials such as chebulic myrobalan (Terminalia chebula Retz.) and beleric myrobalan (Terminalia bellirica (Gaertn.) Roxb.).

The fruits are edible but rarely eaten raw because they are astringent and sour. They are usually made into jam, jelly or syrup, or prepared in cooked food, or as sweetmeat and pickle. Leaves and fruits are used for animal fodder, whereas leaves can also be applied as green manure. Although the wood may warp and split, it is used for the construction of furniture and implements and it is very durable when submerged in water. The wood is also suitable as firewood and produces charcoal of good quality. All parts of Phyllanthus emblica are used medicinally with a vast range of applications. The plant is considered to have antiscorbutic, refreshing, diuretic, laxative and antibiotic properties and to be useful in the treatment of haemorrhages, diarrhoea, dysentery, anaemia, jaundice, dyspepsia, diabetes, fever, bronchitis and cough. A standardized extract of Phyllanthus emblica is traded in the United States as a component of anti-ageing, sunscreen and general-purpose skin care products.

Fruits, bark and leaves of Phyllanthus emblica are rich in tannin. Dried pulp of unripe fruits contains 18–35% tannin; the content of ripe fruits is much lower. The dry stem bark contains 8–20% tannin. The bark of twigs is usually richer, containing 12–24% tannin on dry weight basis. Leaves may yield 22–28% tannin. The tannins of the fruit belong to the group of gallotannins and ellagitannins, giving on hydrolysis large amounts of gallic acid, small amounts of ellagic acid, and glucose. The tannin of the bark belongs to the group of proanthocyanidins, giving (+)leucodelphinidin on hydrolysis. Phyllanthus emblica tannin material gives a reddish brown leather with a soft grain, lacking somewhat in flexibility, which is why it is usually mixed with other tanning materials.

The fruit is an extremely rich source of ascorbic acid (vitamin C), 100 g of juice containing 600–1300 mg, sometimes even more. The tannin in the fruit prevents or retards the oxidation of the vitamin, so that the fruits can be preserved in salt solution or as dry powder while still maintaining their antiscorbutic value. The fruits have diuretic, laxative and purgative activities and also show molluscicidal and antimicrobial properties. They are a rich source of pectin. Fruits of wild plants weigh approximately 5.5 g, cultivated fruits average 28–50 g. Seeds yield about 16% of a brownish yellow oil with linoleic acid (44%), oleic acid (28.4%), linolenic acid (8.8%), stearic acid (2.2%), palmitic acid (3.0%) and myristic acid (1.0%). Seed weight is about 570 g per 1000 seeds. The wood is fairly heavy, weighing 720–930 kg/m3 at 15% moisture content, and is hard and close-grained. It has a reddish colour and is liable to split.

Many of the medicinal applications of the fruits can be ascribed to the presence of ascorbic acid and to the astringent action of tannins, but the fruits contain other active compounds as well. Fruit extracts showed anti-oxidant and antitumour activities in in-vitro and animal tests. They also exhibited cholesterol-lowering, antitussive, anti-ulcerative and hepatoprotective properties and showed potent inhibitory activity on HIV reverse transcriptase; for the latter activity putranjivain A was the most active compound isolated. Phyllemblin has also been isolated from the fruits; it potentiates the action of adrenaline, has a mild depressant action on the central nervous system and has spasmolytic properties. Phyllanthus emblica leaf extracts have shown inhibitory activity on human leukocytes and platelets, which at least partly confirms the anti-inflammatory and antipyretic properties of Phyllanthus emblica leaves. The tannoid principles are potent inhibitors of aldose reductase and may be effective in the management of diabetic complications, including cataract.

In its natural distribution area Phyllanthus emblica is a light-demanding species, often common in grassy areas, brush and village groves. It is photosensitive, only producing flowers at a daylength between 12 and 13.5 hours. It occurs from almost sea-level up to 1500 m altitude. The tree is slightly tolerant of alkaline soils and rather drought resistant, but some cultivars are sensitive to drought and frost. It is fire-resistant and is one of the first trees to recover after a fire. The tree is rather slow-growing. It usually starts bearing fruits when at least 8 years old, but sometimes trees start producing fruits when 5–6 years old. In many areas, full-grown trees are rare as a result of slow growth and exploitation.

In the past, propagation of Phyllanthus emblica was usually by seed. For extensive production and selection, vegetative propagation is necessary. A high percentage of rooting (84%) has been reported from semi-hard wood cuttings collected from the middle portions of vigorous shoots of young trees and planted in beds at a temperature of about 33°C. Budding and softwood grafting may also give good results. In the early stages of growth, copious watering in the dry season and weeding are necessary. The tree coppices well and pollards moderately well. Coppiced shoots grow particularly vigorously, and coppicing is considered the system most suitable for the production and collection of tanbark on a commercial scale. Usually plantations need much weeding because the thin crowns do not form a closed canopy. A dieback disease is caused by Botryodiplodia theobromae, and seedlings are susceptible to a root-rot disease caused by Rhizoctonia solani. Trees may be affected by rusts such as a leaf rust caused by Phakopsora phyllanthi and a ring rust caused by Ravenelia emblicae. Bark-eating caterpillars (Indarbela spp.) damage trees. The fruits are susceptible to rot diseases as a result of infection by Penicillium spp., Glomerella cingulata , Phoma putaminum and Aspergillus niger.

The fruiting season is exceptionally long since the ripe fruits may be retained for several months on the tree without significant loss of quality. Because of this, a long period is available for picking the fruits for consumption. The average annual yield of wild trees in India is about 15 kg of fruit per tree. Some cultivars may yield over 25 kg. Fresh fruits are not palatable because of their astringent and sour taste. The astringency can be removed by steeping the fruits in brine for a few days. Fruits are often preserved by splitting, removing the stone, putting the segments into a solution of 42% glycerol, 42% sucrose, water and preservatives, then heating to 90°C for 3 minutes. The fruits are allowed to equilibrate in the solution for two days at 2°C, then they are drained and packed into containers. Fruits preserved in this way remain acceptable for about 2 months at room temperature, and much longer when cooled, but the ascorbic acid content drops slowly. Marketability of fresh fruits is improved by a combined treatment with wax emulsion and 10 mg/l morphactin. This delays browning and reduces the infection rate from Aspergillus and Penicillium species. For medicinal purposes, fruits are simply dried. For use in tanning, the fruits should be harvested unripe. The stone of unripe fruits should be removed and the remaining flesh dried and ground to prepare a tanning material.

The bark of shoots less than 5 cm in diameter is used to obtain a good tannin. Usually branches can be coppiced every 2 years. Quickly-dried bark contains much more tannin than slowly-dried bark. Therefore it has been recommended to dry the bark rapidly in the sun.

Phyllanthus emblica is widespread and does not seem to be in danger of genetic erosion. In India fruit tree cultivars have been developed, e.g. ‘Banarasi’, ‘Chakla’, ‘Desi’, ‘Francis’, ‘Kanchan’ and ‘Krishna’.

Phyllanthus emblica deserves more attention and is possibly also of interest for tropical Africa. It has interesting aspects as a tannin and dyeyielding species because it could be a regular supplier of tanning and dyeing material by coppicing the tree or harvesting young fruits. Trees are not killed at harvest as is so often the case with species yielding tanbark. Phyllanthus emblica is not easy to cultivate on a large scale. It is rather slow-growing and needs much weeding. New experiments to discover better methods of cultivation might be worthwhile. Selection for large edible fruits is normally not compatible with selection for fruits with high tannin content, but combined selection for tanning and medicinal purposes seems to be possible. Phyllanthus emblica has great therapeutic potential.