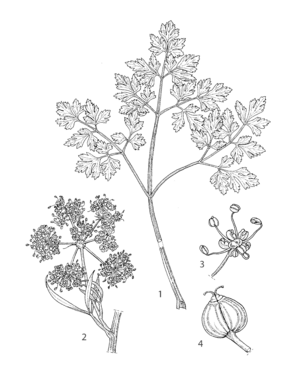 Parsley probably originated in the western Mediterranean. It occurs naturally or naturalized in most Mediterranean (including northern Africa) countries, and in many temperate countries. Parsley is an old crop, which was already well known in classical Greece and Rome. It is widely grown for its leaves in most Mediterranean countries, Europe and North America. In the tropics, including South-East Asia, it is cultivated on a small scale at higher elevations. Forms with a thickened, edible taproot are of recent origin and were probably developed around 1500 AD in northern Germany. Their cultivation is concentrated in north-western and eastern Europe and among North Americans originating from that area.

Both dried and fresh parsley have numerous uses. The fresh leaves of curly-leaved cultivars are commonly used for garnishing and seasoning, while those of flat-leaved cultivars are mainly used to flavour dishes, playing a role in Western cooking similar to that of coriander leaves in Asia. The leaves are also eaten as "lalab” with rice or in mixed vegetables, and are sometimes fried in butter or oil. Dried leaves of parsley, known as parsley flakes, are used to flavour soups, meat and fish dishes, vegetables and salads. They can be made into a tasty tea and are an ingredient of some types of savoury biscuits. Parsley tea is reported to have carminative and diuretic properties and aids in digestion. The taproot of turnip-rooted cultivars is eaten as an aromatic vegetable, their leaves are used like those of flat-leaved cultivars.

Essential oils from the fruits and the herb are used as a seasoning agent in all kinds of food products, especially meats, sausages and sauces. The maximum permitted level of parsley leaf oil is about 1.5% in processed vegetables, and of parsley oleoresin about 0.05% in condiments. The oil from the fruits is occasionally used in perfumery. In the United States the regulatory status "generally recognized as safe” has been accorded to parsley (GRAS 2835), parsley leaf oil (GRAS 2836) and parsley oleoresin (GRAS 2837) (no status known for parsley fruit oil).

Parsley has diuretic, carminative, emmenagogue and antipyretic properties, and is effectively used to control hypertension. Fruits taken in large quantities may induce abortion. Casualties due to its use still occur and for this reason the fruit has been removed from the German pharmacopoeia. Parsley fruits are still incorporated in products against halitosis. Applying the leaves to the breasts several times a day is said to effectively suppress secretion of milk. Bruised leaves are used as a poultice for sore eyes and can be applied to insect bites and stings. The fruits are used to get rid of lice and skin parasites; the juice from the leaves is used as an insecticide.

No statistics are available on world production and trade in parsley, but data on selected markets reveal its importance. Parsley is the most widely used fresh herb in the major European countries, but a large part of the demand is met by domestic growers. In the United Kingdom it accounts for over half the area planted with culinary herbs (300 ha out of 558 ha in 1986), contributing nearly two-thirds of the total production of culinary herbs (900 t out of 1420 t). The total market for dried parsley in France, Germany and the United Kingdom is estimated at 3050-3250 t. In the United States, over 10 000 t of parsley is consumed annually in 23 major cities. Parsley is also a popular herb in South-East Asia. In the Philippines, for example, it is the most popular culinary herb for the fresh herb market: monthly sales in Metro Manila are about 1.2 t.

Two types of essential oil can be steam-distilled from parsley: fruit oil (commercially called seed oil) and herb oil. Fully ripe fruits give the highest yield of oil, ranging from 1.5-7.0%. It is, however, the parsley herb oil, obtained from the flowering tops, which truly represents the odour and flavour of the fresh herb. On a commercial scale parsley herb oil is steam-distilled from the entire shoot plus immature fruits (the latter contain 0.25% oil), since very little oil is derived from the leaves and stems (about 0.06%). Parsley herb oil is a pale-yellow to greenish-yellow liquid with an odour described as unusual, warm-spicy, very leafy, yet like the fresh herb. The flavour is warm, but slightly burning and bitter. It is used exclusively in the food industry. The composition of parsley herb oil varies with its origin.

The odour of parsley fruit oil is described as warm-woody, spicy and somewhat sweet-herbaceous, but not directly reminiscent of the fresh herb. The flavour is rich and deep, aromatic and warm-spicy, but rather bitter. In perfumery it is used to impart a special note to a variety of perfumes, but its main use is in the food industry, to flavour meat sauces, seasonings, canned food and pickles. It has also been used to flavour tobacco.

The aerial parts of parsley are reported to contain furanocoumarins (mainly bergapten) and glucosides (derivatives of glucose and apiose with apigenin and luteolin as aglucon parts).

The essential-oil constituent apiol has been used to treat kidney ailments and menstrual problems. It is also an abortifacient, but large doses may cause paralysis and death. Apiol in minute doses helps cure epileptic fits. Some people get dermatitis from working regularly with parsley.

A monograph on the physiological properties of parsley leaf oil has been published by the Research Institute for Fragrance Materials (RIFM).

The essential oil from the parsley herb is sometimes adulterated with that from the fruit. Adulteration can be detected by changes in the optical rotation from dextro for herb oil to laevo for fruit oil.

Parsley is a biennial or short-lived perennial herb which is commercially mostly grown as an annual. During the first year, only a rosette of leaves is formed; after induction by low temperatures (below 10°C) an inflorescence is formed. Early planting in temperate areas may lead to flowering in the first year. Daylength seems to have no influence on flowering. Germination and early growth are slow.

Parsley was named Apium petroselinum by Linnaeus in 1753, Petroselinum vulgare by J. Hill in 1756 and Apium crispum by Miller in 1768. In Petroselinum the epithet petroselinum cannot be used. According to the botanical code, vulgare is not eligible because Hill did not accept the binary system of nomenclature in the publication where he published his name. The next epithet is "crispum" of Miller. In 1925 A.W. Hill published the correct name using the combination P. crispum as indicated by Nyman (1879), who, however, did not publish this name correctly.

Parsley tolerates temperatures of 3°C to over 24°C, but grows best between 7-16°C. Even in areas with a fairly cold winter, e.g. the warmer parts of Canada, it can be left in the ground until the second season if seed is required. In the tropics it is generally grown above 600 m altitude, its growth rate being reduced at lower altitudes. It is cultivated in Malaysia at 2000 m and in the Philippines at 600 m altitude. Adequate moisture supply is most important during germination and early growth; for a good crop a precipitation of at least 500 mm is needed. Parsley thrives in well-drained fertile loams high in organic matter, with pH ranging from 4.9-8.2.

Parsley is propagated by seed, which can be sown directly in the field. Curly-leaved Parsley and Flat-leaved Parsley can also be sown first in a nursery and then transplanted. Seeds germinate very slowly, but the process can be enhanced by soaking the seeds in warm water overnight. Briefly freezing the seed also helps to break seed dormancy. Sowing rates range from 7-12 kg/ha when grown for the fresh market, higher seed rates of 20-25 kg/ha are used for plants grown for industrial purposes, but 40-60 kg/ha for direct sowing has also been reported. Seed may be sown in double rows, 30-60 cm apart on raised beds, and the seedlings thinned to 10-15 cm apart. Seedlings grown in the nursery can be transplanted when they have 6 leaves or are 5-8 cm tall. In intensive cultivation in Western countries sowing in peat blocks is common.

Weeding in parsley, although difficult because of the close spacing, should be done by hoeing, cultivation or mulching. Mulching will produce a cleaner product, since it prevents soil from splashing on the foliage during the rainy season. Both pre-emergence and post-emergence herbicides have been registered for parsley production in several countries, e.g. glyphosate and chlorbromuron. Fertilizer can be broadcast before planting and N side-dressed after germination and after the first leaf harvest, to maintain a continuous production of leaves. Turnip-rooted parsley requires more fertilizer than the leaf types. In the Philippines, chicken manure and rice hulls (1:1) are incorporated into garden plots prior to transplanting. The usual production period from sowing to last harvest is 4-6 months.

Harvesting of parsley may start 75 days after sowing or when the plants are about 20 cm tall. In temperate regions, three cuts can be made a year. Parsley is harvested manually by grasping the stalks of the outer leaves, cutting them off with a knife and tying them together to maintain bunch integrity. New leaves develop continuously from the centre of the plant for later harvests. Single-harvesting systems are gaining popularity. Plants are then harvested by slicing off the top of the taproot; this facilitates bunching. Parsley grown for industrial use is harvested mechanically; roots of turnip-rooted parsley are mostly harvested manually by digging.

Yields of parsley are generally 10-20(-60) t/ha of fresh herb or 2-3(-5) t/ha of dried herb. There is little difference in yield between single and multiple harvesting systems, but the quality of the product is generally better with frequent harvests. Height of cutting and amount of N fertilizer applied for regrowth also influence the yield and quality. Turnip-rooted parsley may yield up to 28 t/ha fresh roots.

For the modern fresh-herb market, parsley is washed and packed on ice in styrofoam boxes to maintain crispness and fresh appearance. For the production of parsley flakes, fresh leaves are dried rapidly under controlled conditions of temperature and humidity to retain the essential oil and the bright green leaf colour. For commercial purposes, dried parsley should be free from yellow or discoloured leaves, and have a moisture content not exceeding 4.5%. Dried parsley can be packed either in polythene-lined corrugated fibre cases or well-sealed metal containers. They should be stored under cool, dry conditions. Steam distillation of the shoot and the mature fruits yields the commercial parsley herb oil and fruit oil, respectively.

There is little danger of genetic erosion in parsley as it is a popular herb grown almost throughout the world. Several germplasm collections are being maintained, e.g. at the Research Centre for Agrobotany, Tápiószele, Hungary (about 170 accessions, 1990), the N.I. Vavilov Institute of Plant Industry, St. Petersburg, Russian Federation (about 100 accessions, 1990) and the North Central Regional Plant Introduction Station, Ames, United States (176 accessions, 1997).

Important characters in breeding of parsley cultivars are a dark green colour, fineness and leaf form (curliness), regrowing capacity and yield. Hybridization of parsley and celery (Apium graveolens L.) has given promising results.

Parsley is used extensively as a fresh herb in innumerable dishes in many countries throughout the world, including South-East Asia. Due to the absence of major problems in crop protection, it has high potential for large-scale planting also in tropical areas.