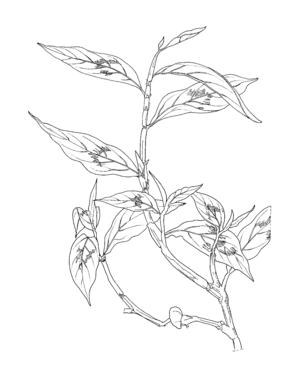 Rau ram is native to and is cultivated in Indo-China. Since the 1960s its cultivation has spread with Vietnamese migrants, mainly to Australia, the Philippines and the United States.

The leaves of rau ram are used to flavour many Vietnamese dishes. The fresh leaves are eaten in salads and also with incubated duck eggs, while fresh or cooked leaves are used in various fish, shellfish (mussels, clams, oysters), turtle and frog dishes. It imparts a flavour reminiscent of lemon and coriander leaves with a slight radish-like pungent aftertaste. The flavour is destroyed by prolonged cooking.

A few shoots of rau ram and water dropwort (Oenanthe javanica (Blume) DC.) are often added when preparing cabbage preserved in brine (like sauerkraut). Although relished by the Vietnamese, the flavour of rau ram is not universally admired, though it is liked by some people who do not appreciate the taste of coriander leaves.

Medicinally the leaves are used as a diuretic, stomachic, febrifuge and anti-aphrodisiac. Externally the crushed leaves are applied against fever, vomiting, ringworm and phagedaena. Juice prepared from the crushed leaves is taken as an antidote against poisonous snake bite, and the bite is covered with the residue of the leaves. In Vietnam pregnant women avoid the use of rau ram, since fresh leaves seem to have abortifacient properties.

The nutritional value of rau ram is unknown. The leaves contain a yellowish essential oil, consisting mainly of alkane aldehydes. Drimane sesquiterpenoids, which are under investigation for their antifungal and anticarcinogenic properties, are present in some Persicaria and Polygonum species, but have not been found in P. odorata.

Besides coriander leaves, leaves of Eryngium foetidum L., known as sawtooth coriander or "Mexican coriander”, are used as a substitute.

Rau ram is a tender perennial. In Vietnam and the Philippines flowering is profuse and starts in the first year. In Vietnam flowering occurs in August-September and fruiting in September-October. In the United States rau ram flowers only occasionally and only after vernalization. Harvesting can continue when plants are flowering. Under greenhouse conditions in the United States leaves can be harvested year-round.

Rau ram requires warm and humid growing conditions. Light frost is probably tolerated. It grows best under partial shade, but full sunlight is tolerated if ample moisture is available. In Vietnam it can be grown and harvested year-round, but it grows best in spring. In cold and dry winters in northern Vietnam it may wither away. Fertile soils with adequate soil moisture are essential for optimal production. Under drier conditions, the stem base becomes woody and the leaves turn yellowish.

Rau ram is usually and easily propagated by stem cuttings with 4-6 internodes (8-10 cm long) taken from the top of mature stems. These are planted obliquely 5-6 cm apart with a row spacing of 10-15 cm in raised beds of light, well-manured soil and are watered well. Under warm and humid conditions cuttings start rooting after 3-5 days and growing after about a week. They are planted out in the field at a spacing of about 20 cm × 20 cm. In lowland Vietnam cuttings are sometimes planted directly in well-prepared and manured muddy rice fields.

Seed is difficult to obtain in the United States and Australia.

Rau ram can be rejuvenated by cutting back the stems.

Occasional damage to rau ram from diseases and pests is reported from Vietnam, but the causal agents are not known. In the United States fungal diseases and slugs sometimes affect rau ram. Providing more sunlight can reduce damage. Caterpillars are the main problem in the Philippines.

The first harvest of rau ram is taken when plants are nearly 2 months old; subsequent harvests are every 12-15 days in Vietnam, and every 3-4 weeks in the United States. In home gardens leaves are picked when required. In commercial plantings whole tops are harvested.

Under very intensive cultivation in small market gardens yields of fresh tops of rau ram may reach 1.3 t/ha per harvest or about 15 t/ha per year.

Leaves of rau ram should be kept cool and moist to maintain their fresh appearance.

It is unlikely that germplasm collections of rau ram are being maintained and there are no breeding programmes.

Migration of Vietnamese people has greatly increased interest in Vietnamese cuisine in many countries, which will be a strong incentive to increase production of rau ram. As people become more familiar with its flavour, rau ram may become an alternative for coriander leaves, as many who do not like coriander find the taste of rau ram more acceptable.