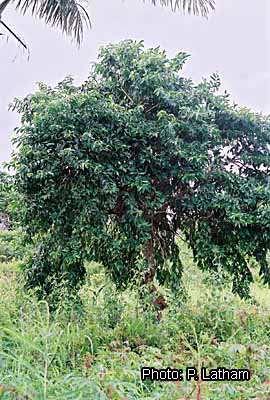 Morinda lucida occurs from Senegal to Sudan and southward to Angola and Zambia. It is sometimes planted around villages, e.g. in Benin.

The wood of Morinda lucida yields yellow to red dyes. In Nigeria and Gabon the root bark is used to dye textiles into scarlet red. On occasions of national grief or the death of a chief, the Ashanti people of Ghana dye cotton cloths red with the root bark of Morinda lucida. These cloths, called ‘kobene’, are worn as mourning dress by official people and by the family of the deceased. The root is the most important traditional source of yellow dye for textiles in the Kasai Province of DR Congo. It can be used without a mordant. The root is also added to indigo vats in Côte d’Ivoire, to contribute both to the fermentation and reduction process necessary for dyeing with indigo and to get darker blues. In this process it is often combined with leafy twigs of Saba comorensis (Bojer) Pichon (synonym: Saba florida (Benth.) Bullock). In the region of Kasongo in north-eastern DR Congo, young leaves of Morinda lucida are combined with leaves of a Philenoptera species (a source of indigo) to obtain a pale green dye used in basket weaving. The bitter-tasting roots are used as flavouring for food and alcoholic beverages and in Nigeria they are popular as chewing sticks. The wood is excellent for making charcoal, but is also used for construction, mining props, furniture, canoes, poles and fuelwood. The leaves are used for cleaning and scouring, e.g. of calabashes. In West Africa Morinda lucida is an important plant in traditional medicine. Decoctions and infusions or plasters of root, bark and leaves are recognized remedies against different types of fever, including yellow fever, malaria, trypanosomiasis and feverish condition during childbirth. The plant is also employed in cases of diabetes, hypertension, cerebral congestion, dysentery, stomach-ache, ulcers, leprosy and gonorrhoea. In Nigeria Morinda lucida is one of the 4 most used traditional medicines against fever. In Côte d’Ivoire a bark or leaf decoction is applied against jaundice and in DR Congo it is combined with a dressing of powdered root bark against itch and ringworm.

In West Africa the roots of Morinda lucida are for sale in local shops and markets, both as dyestuff and medicine, but statistics on quantities involved are not available. Leaves and twigs are sold in markets as a medicinal tonic for young children.

The wood is yellow (hence the name brimstone tree), darkening to yellow-brown in the sapwood and to dark brown in the heartwood. It is medium-weight and hard; it works and finishes well, and it is durable, being resistant to fungi, termites and other insects.

Tests with animals confirm the attributed activity of several traditional medicinal applications of Morinda lucida. Extracts showed anti-inflammatory, antifever and pain-reducing activity in tests with rats and promoted gastric emptying and intestinal motility. Leaf extracts showed in vitro antimalarial activity against Plasmodium falciparum while in several other tests antidiabetic properties were confirmed. Inhibiting effects on cancer tumours in mice have also been reported. A leaf extract gave 100% mortality in the freshwater snail Bulinus globulus at a concentration of 100 ppm.

Morinda comprises about 80 species and occurs throughout the tropics. In Africa 5 species are found. The comparatively small flowering and fruiting heads on long slender peduncles are distinctive characteristics of Morinda lucida. Other Morinda species also yield yellow and red dyes, but they usually have other more important uses. Many species, including those from Africa, are important medicinal plants, widely applied against various kinds of fevers and infections. The powerful dye from bark and roots of Morinda citrifolia L. is used where traditional textile dyeing is practised in Africa. The root bark of Morinda geminata DC. is used in Côte d’Ivoire to dye traditional cotton cloth bright orange-red and the bark is also added to indigo baths to promote fermentation and to produce darker blue colours. From the root bark of Morinda longiflora G.Don the red anthraquinone colorants 1-methylether-alizarin and rubiadin have been isolated and the leaves and roots of Morinda morindoides (Bak.) Milne-Redh. also contain anthraquinone compounds used for red colouring.

In Côte d’Ivoire flowering of Morinda lucida is from February to May, fruiting from April to June.

Morinda lucida grows in grassland, exposed hillsides, thickets, forests, often on termite mounds, sometimes in areas which are regularly flooded, from sea-level up to 1300 m altitude.

The useful parts of Morinda lucida are mostly collected from wild plants. Only occasionally are plants grown in home gardens. Propagation is possible by seed and cuttings, but no details are known.

For dyeing, the root bark or leaves are used fresh, pounded or chopped. For red colours, the fibres to be dyed must first be mordanted with tannin-containing plants and alum. For red and yellow colours, the dye baths are prepared by boiling the root bark or leafy twigs in water for one or two hours before filtering and plunging the textiles into the coloured liquid and boiling it again until the desired shade is obtained.

Morinda lucida is widespread in Africa and not in danger of genetic erosion. Germplasm collections are not known to exist.

Morinda lucida is an interesting multipurpose species yielding dyes, timber, fuel and traditional medicines. For a reliable evaluation, however, more research is needed on its chemical composition and cultivation possibilities.