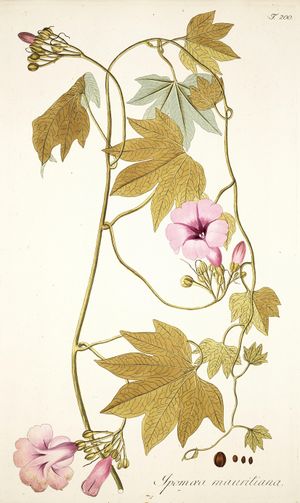 The origin of Ipomoea mauritiana is uncertain. It is originally described from herbarium material from Mauritius, but is now present throughout the tropics and subtropics. It is recorded from most countries of tropical Africa, and also in South Africa.

A decoction of the roots and leaves is widely taken to treat diarrhoea, as a purgative and diuretic. In Senegal a maceration of the powdered roots is also taken as an abortifacient, while an extract of the root is taken as galactagogue. In Côte d’Ivoire a decoction of the dried roots is administered as enema to treat kidney-pains, female sterility, and to ensure a good pregnancy and to avoid miscarriages. In Benin a decoction of the leaves, together with those of Croton lobatus L., is given to babies with colic, while a decoction of leafy twigs is given to strengthen emaciated children. A maceration of the roots, together with those of Ampelocissus bombycina (Baker) Planch., is drunk to treat oedema. In DR Congo ground young shoots are applied to immature gangrenous and necrotic ulcers. In Gabon the ground tuberous roots macerated in water are used as a wash against venereal diseases. In Nigeria a root decoction is taken as an alterative and aphrodisiac tonic. The root, mixed with palm wine, is considered galactagogue.

In India the tuberous roots are considered high value in traditional medicine. They are used in many formulations with other plants, but also as single drug. Different preparations are taken as an aphrodisiac, cardiotonic, demulcent, diuretic, refrigerant, galactagogue and general tonic. They are used against emaciation, enteric fever and spermatorhoea.

In India the seeds have been used to coagulate milk. In Senegal and India the plant is browsed by cattle. The plant is occasionally grown as an ornamental.

Ipomoea mauritiana is an important item in trade in parts of continental Asia. In Africa it is probably of local importance only.

The methanol extract of the tuberous roots contains taraxerol, taraxerol acetate, β-sitosterol, scopoletin and 7-O-β-D-glucopyranosyl scopoletin (scopolin). The root also contains umbelliferone. The root of Indian material has been reported to contain 1.3% of an oil consisting of glycerides of oleic acid (60%), linoleic acid (19%), palmitic acid (8%) and linolenic acid (1%). The seeds contain a gum that may be useful in the preparation of drugs. Starch grains from the seeds are irregular in size and the starch induces less viscosity in water than potato starch.

The tuber root powder, when administered to diets of rats for 28 days, caused dose-dependent and significant lowering of serum total cholesterol and triglycerides. It also led to dose-dependent significant elevations in level of serum high density lipoprotein (HDL)-cholesterol. A significant lowering of serum glucose level and serum low density lipoprotein (LDL)-cholesterol was further observed at the various doses of the powder (0.01, 0.033 and 0.1% w/w diet). The results indicate that regular intake of tuber root powder can be of beneficial use to persons suffering from or prone to coronary disease problems and diabetes.

In India phytochemical and microscopy protocols and standards have been developed that can be used in quality control of the crude tuberous root powder of Ipomoea mauritiana. Analyses of the methanol extracts showed 0.029–0.034% scopoletin. Characteristic microscopic features of tubers of Ipomoea mauritiana include the presence of cluster crystals, simple and compound starch grains with a range of 10–50 μm and orange-brown cell fragments of latex channels.

Ipomoea is a large and complex genus containing 500–600 species of vines and shrubs, widely distributed throughout the tropics and subtropics. Ipomoea mauritiana has been placed taxonomically in subgenus Eriospermum, section Eriospermum, in which Ipomoea batatas (L.) Lam. is also placed. Several other Ipomoea spp. are medicinally used in Madagascar and tropical Africa.

Ipomoea desmophylla Bojer ex Choisy is a small liana endemic to Madagascar and occurring in dry localities in grass, rocky areas or woodland, from sea-level up to 2500 m altitude. The tubers are purgative if eaten in large quantities, but despite this they are eaten during times of food shortage. The aerial parts provide a good fodder.

Ipomoea longituba Hallier f. is a small shrub with sprawling branches from Kenya, Uganda, Tanzania and Madagascar. An infusion of the tuber is taken by women in Tanzania to increase milk production. Throughout East Africa a tuber infusion is given to cattle to increase milk production and as a laxative. A tuber poultice is applied to ticks. Tubers are also cooked and eaten as food.

Ipomoea rubens Choisy is a large perennial liana, widespread in tropical Africa, the Indian Ocean islands, South-East Asia and South America. In West Africa crushed leaves are applied to snakebites or rubbed on the whole body. A leaf maceration is used for bathing to prevent miscarriages, to treat eclampsia and as post-partum care. A leaf decoction is used as a wash for syphilitic sores, and for teething children. Root powder is eaten to treat sexual asthenia.

Ipomoea verbascoidea Choisy is a small woolly-hairy shrub, occurring in West and southern Africa and in Madagascar. In Zimbabwe and Namibia a root infusion or root pulp boiled in milk is given to babies with lack of appetite to fatten them. A porridge made from the tubers is taken to treat infertility of women.

Ipomoea wightii (Wall.) Choisy is a perennial herb with twining or prostrate stems from Sudan and Ethiopia southward to South Africa and Madagascar, but also in tropical Asia. In DR Congo the ash of burned plants is applied to the skin to treat leprosy. In Rwanda leaf extracts are taken to treat liver complaints and roots have been used in mixtures in the preparation of arrow poison, whereas in East Africa root preparations are taken against cough and leaf decoctions against stomach-ache. In Ethiopia plants are locally collected to serve as forage.

Flowers of Ipomoea mauritiana are open and available to visiting insects for a very short time. In beach vegetation in Brazil, anthesis occurs between 5:30 a.m. and 6:00 a.m. and by 11:00 a.m. flowers are completely closed.

Ipomoea mauritiana grows in dense and open forest, in riparian woodland, savanna with trees, dwarf forest near seashores, on river banks and in swamps, often on sandy soils, from sea-level up to 2500 m altitude. It is also found in waste places and in plantations of Tectona and Gmelina.

Ipomoea mauritiana is propagated by seeds. Protocols have been developed in India for the micropropagation of plant material for medicinal purposes.

Ipomoea mauritiana is widespread, common and sometimes weedy; it is in no danger of genetic erosion.