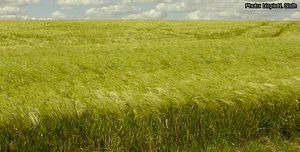 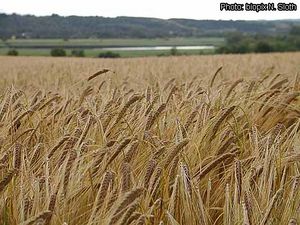 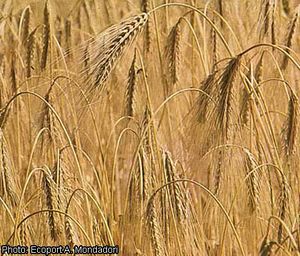 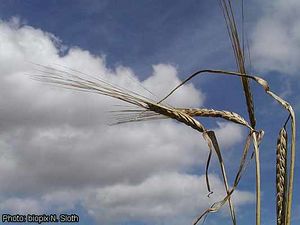 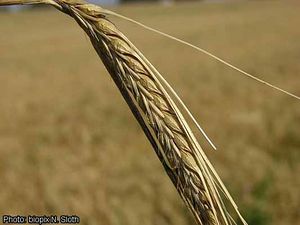 Barley was domesticated in western Asia before 7000 BC. Cultivation spread to northern Africa and, moving upwards along the Nile, into Ethiopia, where it became one of the major cereals. It is not known exactly when barley reached Ethiopia, but it has been grown there for at least 5000 years. Barley reached southern Spain 4000–5000 BC and central and northern Europe, as well as India, 2000–3000 BC. It reached China 1000–2000 BC. Barley was cultivated in oases in the Sahara 100–300 BC, but seems not to have migrated southwards into West Africa before the 16th Century AD. Columbus took it to the New World. Nowadays it is grown over a broader environmental range than any other cereal, from 70°N in Norway to 44°S in New Zealand. In Ethiopia, Tibet and the Andes it is cultivated higher on the mountain slopes than other cereals. In tropical Africa it is mainly found in East Africa. In West Africa barley is grown as a cold season crop in the Sahel region and northern Nigeria. In Madagascar it is grown in the dry season.

On a worldwide scale barley is used, in order of importance, as animal feed, for malting (especially for beer brewing) and as human food. In the tropics and subtropics it is mainly grown for human food. In Ethiopia and Eritrea most of the grain is used for making the local pancake-like bread (‘injera’), but it is also made into porridge, soup and home-made alcoholic and non-alcoholic drinks. In Kenya and Tanzania it is more important for brewing. Grains are roasted or fried, and consumed as snack, particularly during social gatherings.

Barley straw is used as animal feed, for animal bedding, and as cover material for huts. Barley can be grazed during tillering or cut before maturity and directly fed to the animals or used for silage. In temperate areas barley grain is also fed to animals. By-products from the brewing process are also used in livestock feed.

Annual world production of barley is 136 million t grains (mean of 1999–2003) from 54 million ha. Major producing countries are the Russian Federation, Germany and Canada with 16.2, 12.1, and 11.4 million t per year, respectively. In tropical Africa the main barley-producing country is Ethiopia, with 950,000 t of grain from 870,000 ha in 1999–2003, followed by Kenya (45,000 t from 20,000 ha) and Eritrea (24,000 t from 44,000 ha). In Ethiopia and Eritrea barley production is mainly for subsistence, and in Ethiopia the share of malting barley is about 2% of the total production. Small areas of barley (less than 4000 ha) are planted in Mauritania, DR Congo, Tanzania, Zambia and Zimbabwe. Most barley is consumed locally, with about 20 million t per year entering international trade in 1998–2002. The European Union, Australia and Canada are the largest exporters; Saudi Arabia, China and Japan the largest importers. In 1998–2002 the largest importers in tropical Africa were Zimbabwe and Ethiopia, with average annual imports of 8000 t and 3000 t, respectively.

Hordeum comprises 32 species. Hybrids from crosses of Hordeum vulgare with other Hordeum species are sterile or anomalous. The large variability in barley led to many barley species being distinguished in the past. At present, the accepted view is that in barley evolution only a single species is involved, Hordeum vulgare, forming a crop-weed complex, in which the cultivated barley has been developed from original wild populations. Fertile hybrids between wild and cultivated types are easily obtained and occur naturally where the two grow together. Wild barley has been classified as subsp. spontaneum (C.Koch) Thell. (synonym: Hordeum spontaneum C.Koch), distributed in northern Africa, the eastern Mediterranean area and western Asia, and cultivated types as subsp. vulgare.

The variation in cultivated barley is overwhelming, with thousands of landraces and hundreds of cultivars. Cultivars can be divided according to the number of rows of grains (2 or 6), lax and compact spikes, or awned and awnless lemmas. All wild types have 2-rowed spikes, i.e. of the 3 spikelets at each node the two lateral ones are sterile, and only the central one develops a grain. Under domestication 6-rowed types appeared in which all 3 spikelets produce grains. Here, 2 genes are involved, both with multiple allelic series, but a single recessive mutation is enough for a 2-rowed barley to become 6-rowed. Cultivars grown in West Africa have 6 rows of grains in the spike, but in Ethiopia, especially in the upper highlands, a type of barley is found with 2 full rows and parts of other rows (‘irregular barley’). In ‘husked barley’ lemma and palea adhere to the grain at threshing, whereas in ‘naked barley’ the grain threshes free. A single recessive gene controls the latter character. Based on vernalization requirements barley is classified in winter and spring types.

The seedling emerges from the soil 5–6 days after germination. Tillers are produced on the main shoot until flower initiation. The number of tillers per plant is influenced by plant density, cultivar and environmental factors: a single plant usually develops 1–6 stems, but at low densities it may be several times as high. Time to flower initiation varies among cultivars, but in general barley flowers earlier than wheat. Barley is a quantitative long-day species, flowering earlier under longer photoperiods, but the photoperiod sensitivity differs between cultivars, ranging from very sensitive to almost insensitive. Flowers are predominantly self-pollinated, but cross-pollination can be as high as 10%. The grain ripens in 20–40 days. Barley can mature in a short season of 3–4 months, which is shorter than the season needed for other major cereals.

Barley grows under a wide range of photoperiod, temperature and rainfall conditions, but is best adapted to temperate climates. It withstands high temperatures in dry climates and humidity in cool climates, but it is ill adapted to hot, humid climates, primarily because of its susceptibility to diseases. In Ethiopia, barley is cultivated at 1500–3500 m altitude, but mainly between 2000 m and 3000 m. In Kenya it is grown at 1500–3000 m altitude.

Winter barley types need vernalization by a period of low temperature (3–12°C). Barley is adapted to an annual rainfall ranging from 200 mm to more than 1000 mm. It is more drought-escaping, due to its early maturity, than drought-tolerant.

Well-drained fertile loams or light clay soils are best for barley production. Barley is more tolerant of alkaline soils than other cereals, but does not tolerate acid soils; a pH of 6.0–8.5 is generally acceptable. It is very sensitive to waterlogging. Some cultivars withstand up to 1% salt in the soil.

Barley is planted through direct seeding. The 1000-seed weight is 25–50 g. Before sowing, the land is ploughed to a depth of 10–15 cm. On smallholdings the land is prepared by animal traction. The seed should preferably be treated with fungicide to protect the crop from seed- and soil-borne diseases. Barley can be planted with drills, but on smallholdings seeding is usually by hand. When sowing with drills, the distance between rows is 15–35 cm, and the seed rate is 50–150 kg/ha. The sowing depth is 2–6 cm.

In the highlands of Ethiopia, barley is cropped twice a year. The main cropping season (‘meher’) is from June–December (with most of the rain in June–September), while the minor cropping season (‘belg’) is from February–June (most rain in March–April). Barley is the most suitable crop for ‘belg’-season production. Barley is usually sole-cropped, but in Eritrea and northern Ethiopia barley is often intercropped with wheat (the ‘hanfetz’ cropping system). In Eritrea farmers traditionally broadcast mixtures of 67% barley and 33% wheat; sometimes 50:50 mixtures are sown. In Ethiopia and Eritrea barley is a smallholder crop, but in Kenya it is grown on large-scale mechanized farms.

Weeds cause economic losses in barley due to a reduced number of tillers and grains per spike. Resource-poor farmers weed by hand. The most widely used herbicide to control broad-leaved weeds in post-emergence spraying is 2,4-D. Barley requires about 25–35 kg N to produce 1 t of grain. Nitrogen can be applied before seeding or as topdressing after planting. Under dry conditions high rates of N application can cause yield reductions, whereas under favourable conditions high rates of N increase the risk of lodging and diseases. Excessive rates of N fertilization of malting barley may increase the protein level in the grain above the acceptable level.

In Ethiopia farmers usually grow barley in low-input systems, with minimal seedbed preparation and weeding, and without applying herbicides, fertilizers or insecticides. Low soil fertility and insufficient weed management are major constraints. In experiments at Holetta, application of 57 kg N and 25 kg P per ha led to a grain yield increase of up to 200%, whereas a single hand weeding at 35 days after emergence gave a grain yield increase of up to 20% compared to an unweeded crop. Lodging is also a common problem in Ethiopian barley cultivation. In West Africa barley is grown as a dry-season crop, often under irrigation.

Barley is susceptible to attack by many kinds of pests, including aphids, shoot flies, grasshoppers, crickets, thrips, army worms, cutworms, and beetles and their larvae. Control may involve adjusting the planting date, and applying insecticides. In general, losses due to pests are relatively limited, with many of the pests causing greater damage as vectors of viruses, notably BYDV. Major storage pests of barley are insects and rodents.

Barley is ready for harvesting after reaching 35–40% kernel moisture. The crop is harvested by hand using a sickle or by combine. Threshing of malting and ‘naked’ barley requires special care to avoid too much broken seed.

A high moisture content of barley grains at harvest favours the development of mycotoxins dangerous to humans and livestock. Before storing, grain has to be dried to 14% moisture or less. When barley is cultivated on small areas, it is common practice to keep selected spikes to provide the seed for the next crop.

In barley breeding methods are used that are typical for self-pollinated crops. Until 1950 the main breeding method was either mass selection or pure line selection within landraces, which are still cultivated today in many countries, e.g. Ethiopia. New variability has been created by crossing, backcrossing and mutation. Recurrent selection is applied to increase recombination by crossing among F1’s and by repeating the crosses among a number of F2 plants or by using male-sterility genes. Mutation breeding with radiation or chemicals and double haploids have been widely used in barley breeding. Among the International Centres, ICARDA has the global mandate for assisting barley improvement programmes of National Agricultural Research Systems (NARS) in developing countries. Modern breeding has resulted in barley types with improved amino-acid composition (4.1% of the protein as lysine). The major emphasis is on producing cultivars resistant to diseases and pests and with adaptation to specific agro-ecological environments. Resistance to aphids has been incorporated into some cultivars. Ethiopian barley has been particularly useful in the improvement of nutritional quality and in supplying resistance to fungal and viral diseases (including powdery mildew, smuts, rusts, net blotch, scald, BYDV and BSMV). In Ethiopia, 9 improved barley cultivars were released between 1980 and 2000, but the adoption level is low (11% of the area).

In general large improvements in barley production are possible through breeding of cultivars resistant to lodging and diseases. As most barley breeding has been for favourable environments, the potential of the crop in low-input agriculture is largely under-exploited. In the Ethiopian highlands, where barley is the preferred food crop, soil fertility has declined as a result of erosion and continuous cultivation. Under these circumstances it has been difficult to improve the locally adapted farmers’ cultivars. The staple Ethiopian cereal tef (Eragrostis tef (Zuccagni) Trotter), is taking over from barley as a result of favourable market prices, and high-yielding 6-rowed barley cultivars are becoming less important. In these areas breeding for early-maturing cultivars with higher resistance/tolerance to moisture stress than the existing ones might reverse the trend. Ethiopia has the potential to meet the local demand for malt barley and to produce for the African market. This can be achieved with the breeding and production of high-quality malt barley that meets the breweries’ standards, a concomitant increase in the number and capacity of malt-processing factories, and an efficient market structure.