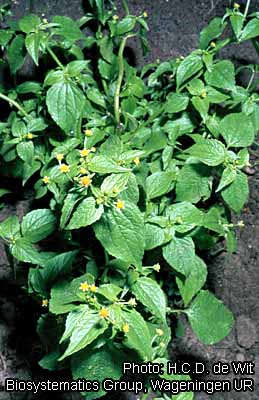 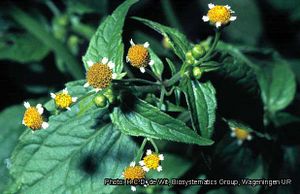 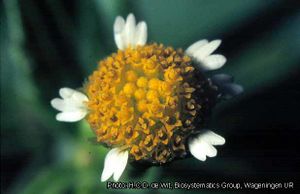 close up of flower

Galinsoga parviflora originates from Central America. It has been introduced elsewhere and it can be found in both temperate and tropical regions. In tropical Africa it is widespread and has been collected in Cape Verde, central, eastern and southern Africa, and the Indian Ocean islands.

People in Uganda, Tanzania, Malawi, Zambia, Zimbabwe and possibly elsewhere in Africa collect gallant soldier when weeding their crops. The young stems and leaves are cooked and eaten as a vegetable but flowerheads and buds are usually removed. Gallant soldier is also eaten as a vegetable in South-East Asia. In South America the dried leaves (’guascas’) are an essential flavouring for certain dishes.

Gallant soldier is used for the treatment of nettle stings and similar skin inflammation by rubbing the affected skin with the leaves. The leaves are used for wound dressing in Ethiopia. The plant is grazed by livestock and used as a feed for chicken, rabbits and pigs.

Tests of the plant for antibacterial and insecticidal activities have given negative results, but it had strong cardiovascular effects.

As a weed, gallant soldier is difficult to eradicate because plants left on the ground after weeding may re-establish roots, whereas undeveloped seeds will continue to ripen even under dry conditions. Fields can soon be covered by gallant soldier because a single plant of 8–9 weeks old can produce over 7000 viable seeds and several generations are possible in each growing season. The small, lightweight fruits can be spread by the wind and the stiff pappus hairs cling to people’s clothing or the fur of animals.

In tropical Africa gallant soldier is found from sea-level to 2400 m altitude. It requires medium to high rainfall conditions. Seed requires temperatures of 10–35ºC and light to germinate. Buried seeds do not germinate at all, and shade also prevents germination, which is why gallant soldier is only found on open land or as a weed between young and small crop plants. It grows well in a variety of soils but prefers soil with ample nutrients and good drainage.

Farmers consider Galinsoga parviflora an indicator of high soil fertility. In Africa it is only collected from the wild and trade is limited to local markets.

Gallant soldier is a common and locally serious weed reported in wheat and maize in Ethiopia, cotton in Uganda, coffee, maize, sorghum and beans in Tanzania, wheat in Angola, vegetables in Zambia, maize in Zimbabwe and potatoes in Mozambique. It serves as an alternate host for many insects and viruses which affect crop species such as tobacco, potato and cabbage. It is also a host plant for Phytophthora infestans and root-knot nematodes.

Being a widespread weed, Galinsoga parviflora is not liable to genetic erosion.

Interest in Galinsoga parviflora is mainly directed at its control as a notorious weed. Locally, however, it will continue to make a contribution to the diet of many.