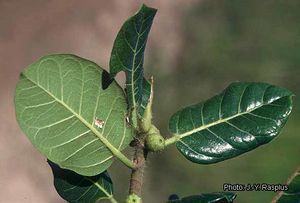 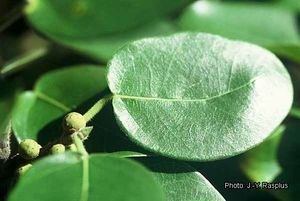 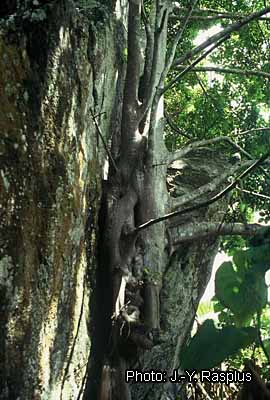 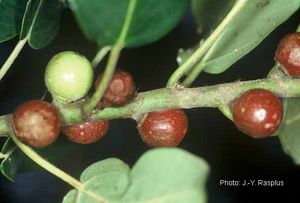 Ficus glumosa is widespread throughout most of tropical Africa, extending to western Saudi Arabia in the east and South Africa in the south.

The bark, rich in tannin, is used in central, eastern and southern Africa for tanning hides. In Kaokoland in Namibia it is said to be the most important tanning agent for leather, giving it a red colour favoured by the Himba people. The bark is also a source of a brick-red dye, popular in Mali (‘bogolan’ dyeing process), Sierra Leone (Koranko people) and Ghana for dyeing cloth and raffia. In some areas, e.g. Sudan, cloth is made from the bark. The bark also contains abundant sticky white latex which is used in Ghana like bird-lime to trap crickets. In Uganda it is chewed as chewing-gum and in West Africa the Tenda people use the latex for fastening arrowheads to their shaft. Young leaves are eaten as a vegetable (e.g. in soup in Ghana) and are browsed by cattle. The fruit is edible when fully ripe and said to be the most flavoursome of the wild figs in Senegal. The wood is light and used for firewood and charcoal. Sometimes trees are planted as a live fence or as windbreak.

Medicinal uses are numerous. In Côte d’Ivoire latex is applied to alleviate pain from sprains and latex diluted in water is used in the Central African Republic to treat diarrhoea. In Zimbabwe latex is dropped into the eyes against sore eyes. Powdered bark, mixed with latex, is used in Nigeria to plug carious teeth and in the Central African Republic a decoction of the bark is used as a mouthwash against toothache. A bark macerate is applied on the eyes of new born babies in Senegal (Casamanca) to prevent conjunctivitis. Tenda people apply pounded bark topically against headache. In East Africa pounded bark, soaked in water, is drunk against stomach disorders. In Tanzania a decoction of pounded bark is used to wash sores daily until recovery. In Senegal and Côte d’Ivoire the roots and fruits are used in preparations to cure female sterility.

Ficus comprises about 750 species, occurring in tropical and subtropical regions, with a few species in warm temperate regions. About 100 species occur in Africa, 500 in Asia and Australia, and 150 in America. Ficus glumosa belongs to subgenus Urostigma, section Galoglychia. Particularly the indumentum on its leaves varies strongly, usually being most dense in the southern part of its range and almost absent in north-eastern Africa. Ficus glumosa can easily be confused with Ficus stuhlmannii Warb., which is characterized by the more prominent tertiary venation of the lower leaf surface. The bark and leaves of several other species are used for tanning or as sources of red, brown or green dyes.

Ficus ilicina (Sond.) Miq. (synonym: Ficus guerichiana Engl.) is a shrub or small tree up to 5 m tall, sometimes lianescent, with smooth but flaky bark, roots often plastered over rocks, elliptical, oblong or oblanceolate leaves 3–9 cm × 3–5 cm and globose figs, c. 1 cm in diameter, solitary or in pairs. It occurs on rocky places in dry areas in south-western Angola, Namibia and South Africa. Its bark is used for the tanning and dyeing of hides and the fruits are eaten.

The bark of Ficus cordata Thunb. is used in southern Africa for the tanning and dyeing of hides but this species is more important as an ornamental.

The bark of Ficus lutea Vahl is used in Madagascar to obtain red-ochre dyes for raffia and silk textiles, but its major use is also ornamental.

In Mali the barks of Ficus platyphylla Delile and Ficus sycomorus L. are dye sources for bogolan textiles giving red-ochre to brownish colours, but the former is more important for its latex, used in chewing gum and the latter for its fruits, cooked as a vegetable in soups or in couscous.

The pollination in the figs is effected by Elisabethiella glumosae wasps. These enter the fig via the osteole, a bract-covered apical pore. Once inside, they pollinate the female flowers and deposit their eggs in the ovaries. However, only the short-styled ovaries can be reached by the wasps, and these serve to hatch the larvae, while the seeds develop in the long-styled ovaries. Birds eat the fruits and probably disperse the seeds.

Ficus glumosa occurs on rock outcrops and rocky slopes in dry areas, less often in riverine and open Brachystegia woodland, occasionally on termite mounds. It is found up to 2000 m altitude.

Ficus glumosa can be propagated by seed and cuttings.

To make a tanning liquor, the bark is finely chopped and soaked in water. The hides are then steeped in the liquid. In Mali bogolan techniques of dyeing often combine dyes from several species to increase the solidity of the colours. The barks of Ficus glumosa, Ficus platyphylla or Ficus sycomorus are finely chopped and boiled in water. The cloth is soaked in this dye and then dried in the sun. Then comes the ‘fixing dye’, a bath in a decoction of the leaves of Anogeissus leiocarpa (DC.) Guill. & Perr. The cloth is again left to dry in the sun. The ‘fixing bath’ and sun drying process are repeated three times at least, and then the cloth is soaked again in the first dye bath with Ficus bark and finally dried in the sun.

Ficus glumosa is very widespread and although it is nowhere very common, it is not in danger of genetic erosion.

Ficus glumosa is a multipurpose tree or shrub, particularly valuable in drier areas for its edible young leaves and ripe fruits. More research is needed for a better understanding of the dye and tannin properties of the bark and the numerous reported medicinal properties.