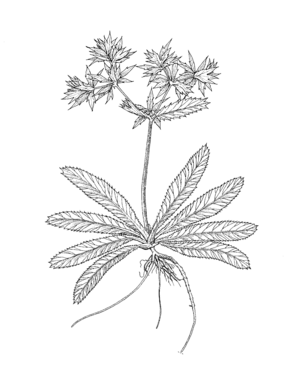 Note: Strictly speaking, the name "cilantro” refers to sawtooth coriander, but is often used for leaves of Coriandrum sativum L.

The origin of sawtooth coriander is not known, but it is native to Central and South America, from southern Mexico to Panama, Colombia, Bolivia and Brazil and from Cuba to Trinidad. It has been introduced into Florida and the Old World tropics where it has naturalized in many places. It was introduced into South-East Asia by the Chinese, as a substitute for coriander; it is known in Indo-China, Peninsular Malaysia (since 1888), in Java (since 1896) and in Sumatra (since 1915). It is also cultivated in Central and South America and occasionally elsewhere, e.g. in Thailand, Cambodia, Vietnam, the Philippines and Japan.

The leaves of sawtooth coriander are aromatic and smell like coriander; in view of its origin it is popularly referred to as "Mexican coriander”. Where sawtooth coriander occurs, including in South-East Asia, the fresh leaves are used as a flavouring in food, e.g. in soups, curries, stews, rice and fish dishes; tender young leaves are eaten raw or cooked, as a vegetable. Sawtooth coriander has many medicinal uses in Central and South America: a root decoction is taken as a sudorific, diuretic, febrifuge and stimulant; juice or a decoction of the leaves is used as a stimulant, as a laxative and as a remedy for colds and fever; a decoction of the whole plant is said to lower blood pressure, to be a potent emmenagogue and abortifacient, and is also used as an aphrodisiac.

In most places sawtooth coriander is collected from the wild or from some plants in the garden, and is used and traded locally. It is common on South-East Asian markets. Fresh plants are sold in abundance on markets in Panama. Trinidad exports sawtooth coriander to North America and Europe. No statistics are available.

Steam-distilled essential oils from the leaves and the roots (Malaysian samples) were found to contain no sesquiterpenoids, small amounts of monoterpene hydrocarbons and a large number of aldehydes in high proportions. Alkanals and alkenals dominated the aldehydes in the leaf oil and are presumably responsible for the intense aroma. The major components (>5%) were found to be (E)-2-dodecenal, 2,3,6-trimethylbenzaldehyde and dodecanal. The analytical data from the Malaysian samples differ markedly from data obtained from samples of other origins.

Not only coriander leaves but also leaves of Persicaria odorata (Lour.) Soják, known as "Vietnamese coriander” are used as a substitute. Young leaves of other Eryngium species can also be used, e.g. E. creticum Lamk from the Near East, E. floridanum Coult. from Central America and E. maritimum L. from Western Europe.

In South-East Asia sawtooth coriander flowers throughout the year; plants can become several years old. In many places, including plantations, it has become a rather common weed. In Puerto Rico, plants grown under shade had fewer inflorescences with lower fresh weight than plants grown under full sunlight, but the leaf chlorophyll content increased in plants grown under low light intensities.

At first sight, the inflorescence of Eryngium with its short headlike spikes, surrounded by bracts which look like an involucre, strongly resembles a Compositae inflorescence. The structure of the flowers and fruits, however, is typical umbelliferous. Many Eryngium species are singularly decorative plants grown for their showy upper leaves, bracts and thistle-like flower heads.

Sawtooth coriander prefers a partly shaded site and fertile, not too dry soils, e.g. in meadows, plantations, waste places, along roadsides and forest edges, from the lowlands up to 1700 m altitude. Plants do not usually grow close together but appear as individual weeds.

Sawtooth coriander is only cultivated on a small scale in South-East Asia, and no information is available on husbandry. As wild sawtooth coriander prefers well-drained, moist and fertile soils it will be necessary to enrich poor soils with fertilizer and to water during dry periods.

No serious diseases and pests are known. In India Cladosporium oxysporum has been identified from leaf spots. In Indonesia sawtooth coriander is a common weed in cocoa plantations and the insect Helopeltis theivora has often been found on it. Ants may eat the broadcast seed.

Individual tender leaves are harvested, leaving the topmost 3 leaves intact. On average, 10-15 leaves can be harvested per plant in 5-10 harvests at intervals of 1-2 weeks before flowering intervenes.

No reliable information is available. A rough estimate for plots in the Philippines arrived at 10 t/ha of fresh leaves per harvest or 80 t/ha for the total crop.

Leaves of sawtooth coriander should be marketed soon after harvesting because they wilt easily; packaging and refrigerated storage extend shelf life: packaged sawtooth coriander can be stored at 10 °C for up to 2 weeks, but at 28 °C for only 4 days.

There are no known germplasm collections or breeding programmes for sawtooth coriander.

Sawtooth coriander is commonly used as a flavouring in Thailand, Cambodia, Vietnam and China. The increasing interest in exotic dishes and the presence of Asian immigrant communities all over the world may lead to a growing market for this herb. An example is its popularization in the United States by Vietnamese refugees.