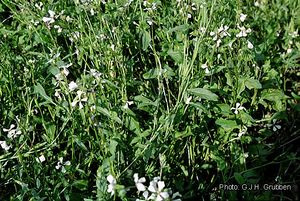 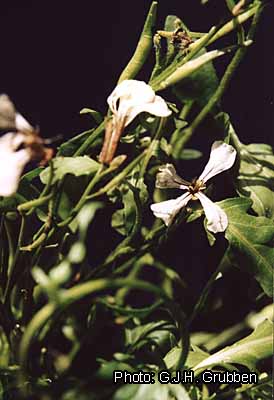 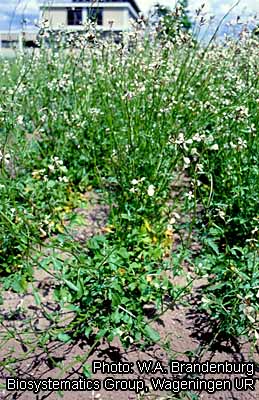 Eruca vesicaria originated in the Mediterranean region and western Asia extending as far as Afghanistan, where it is still a fairly common wild plant. Its distribution is expanding through escapes from cultivation and it can now be found as an occasional weed in western and central Europe, western and central Asia, North America and Australia, and also in tropical Africa (e.g. Ethiopia, Zimbabwe) and South Africa. Cultivation probably started in northern Africa and the eastern Mediterranean region and later extended into the Sahel region. A second region where the cultivation of garden rocket has a long history extends from western and central Asia to northern India. Currently, garden rocket is cultivated all around the world, but remains most important in the Mediterranean region. In Africa it is grown throughout the Sahel region, from Mauritania in the west to Ethiopia and Eritrea in the east. It is especially popular in Sudan.

Garden rocket is an ancient crop revered by the ancient Greeks, who used both the seed oil and the leaves for their alleged aphrodisiac properties. It is also an ancient crop in Afghanistan, Pakistan and northern India where it is primarily grown for its oil called ‘jamba oil’ or ‘taramira oil’. In the Mediterranean region it developed into a salad vegetable. The taste of the leaves resembles that of watercress, being similarly sharp with a mustard-like pungency. Young, fresh leaves that are not too pungent are becoming increasingly popular in western cuisine and are consumed raw in green salads. They are often added steamed or raw to Italian dishes and pizzas. In Arab countries pieces of meat served with rocket leaves form a popular dish; these leaves, locally called ‘gargeer’, are generally more mature and therefore sharper than the ones eaten in salads in Europe. Older leaves and seeds are used as a condiment and mature leaves can be cooked or utilized in sauces. Another vegetable use is as ‘rocket sprouts’, whereby the young seedlings are cut when the cotyledons are fully opened or when the first pair of true leaves is present. In Africa garden rocket is used as a vegetable, a condiment and as an oil crop.

The seed oil has a high erucic acid content and is used as an industrial oil for lubrication and illumination. The seeds are also used to produce a kind of mustard. Taramira oil and jamba oil are still used in India for pickling. Its use as a salad or cooking oil is limited because of its initial acridity; the acridity disappears after storage for 6 months and the oil can then be used for cooking purposes. The leaves and crop residues are fed to camels, cattle and sheep, and the cake remaining after oil extraction is also used to feed livestock.

Garden rocket is popular in the Mediterranean region and Sudan, and in Sudan alone there is about 3000 ha of year-round cultivation under irrigation, mainly for the leaves. No statistics on growing areas are available for other Sahel countries. Garden rocket is traded in local markets throughout northern Africa. It is becoming increasingly important as a salad crop in western Europe and the United States, but statistics on production are not available.

The seed oil is rich in erucic acid and gadoleic acid, containing 33–45% and 7.3–9.8%, respectively. The seeds also contain glucosinolates. Tests showed amelioration of alloxan-induced diabetes mellitus and oxidative stress in rats by daily oral administration of the seed oil.

As a spicy vegetable, garden rocket can be replaced by watercress (Nasturtium officinale R.Br.), radish (Raphanus sativus L.) and to a lesser extent by leaf mustard (Brassica juncea (L.) Czern.) and white mustard (Sinapis alba L.). In North Africa and Europe, it is frequently replaced by other species that are also called rocket and especially by Diplotaxis tenuifolia (L.) DC., which is generally milder in taste. As an oil seed or mustard crop it can be replaced by several Brassica species.

Eruca comprises about 5 species and is native to the Mediterranean region and western Asia. Two subspecies of Eruca vesicaria are distinguished: subsp. vesicaria with persistent sepals all pouched, and subsp. sativa (Mill.) Thell. with caducous sepals of which only the outer two are pouched. The latter is often considered to represent a distinct species: Eruca sativa Mill. The leafy vegetable belongs to subsp. sativa.

Germination takes about 1 day at 25°C, 2–3 days at lower temperatures. The first harvest of rosette leaves may start 3–4 weeks after germination. Garden rocket may produce flowers as early as one month after planting and seeds can be collected soon thereafter. Types grown specifically for their leaves usually flower about three weeks later than those grown for their oil seeds.

Garden rocket grows spontaneously in disturbed localities including abandoned gardens and roadsides. It prefers a hot, dry climate and full sun. It is a hardy plant, which requires little care. Under favourable climatic conditions it can be grown on almost any type of soil, but it prefers sandy and sandy-loam soils. Garden rocket tolerates salt reasonably well.

The seeds are sown on raised beds in shallow furrows spaced at 15–22 cm or seeds are broadcast directly in the field. A density of 100 plants/m2 was found to give the highest yield, but in Italy densities of up to 300 plants/m2 are used. The seed requirement is about 20 kg/ha for row planting and 50–80 kg/ha when broadcast. For oil production, wider spacings and correspondingly lower seed rates are used. In the subtropics sowing takes place in late winter or early spring, during cool but mild weather in moist, fertile soil. To encourage emergence, the seed is covered with 1–3 cm of light, sieved soil.

Although garden rocket is fairly tolerant of salt, the high salt level often found in the top layers of desert soils has a negative impact on germination and further growth. Some farmers therefore first irrigate their land to leach out excessive salts from the top soil. Subsequently irrigation should be applied regularly at short intervals of 3–4 days. Once established, garden rocket requires little irrigation. Because of the fast early growth only light weeding is needed. It is recommended that organic manure be used at a rate of 25–50 t/ha during land preparation and that urea be added at a rate of 100 kg/ha 3 weeks after planting. Nitrogen fertilizing and shading result in more tender leaves with a milder taste. Fertilizer recommendations for garden rocket grown as an oil crop are lower.

Garden rocket is very susceptible to clubroot (Plasmodiophora brassicae). Powdery mildew (Erysiphe cichoracearum) is one of the few other diseases that affect garden rocket. Flea beetles (Phyllotreta cruciferae) often gnaw small holes in the foliage and it is therefore important to observe a proper crop rotation. Other pests affecting garden rocket are thrips (Caliothrips spp.) and jassids (Empoasca lybica).

Harvesting starts 3–6 weeks after sowing, when young, tender leaves and shoots are picked. The bottom set of leaves should be left to allow new shoots to regenerate. If cut too low the plant is killed. A total of 2–3 cuts are usually made before the plant starts flowering and no further leaf harvests are possible. Farmers usually leave their plants in the field to produce seed for the next season’s crop.

Leaves can be stored in plastic boxes for 2–3 days at 0°C.

Many landraces exist, allowing ample scope for selection. The largest collections of Eruca germplasm are maintained at the Institute of Germplasm in Bari, Italy, at NBPGR, New Delhi and Haryana Agricultural University in India, and at the N.I. Vavilov All-Russian Scientific Research Institute of Plant Industry in Petersburg, Russia. In 1985, 25 samples of germplasm of Eruca vesicaria were collected in north-eastern Sudan.

A wide variability has been observed with regard to erucic acid and glucosinolate contents. However, the development of cultivars with a low glucosinolate content does not appear to be an improvement objective since it would diminish the characteristic flavour. Attempts have been made to use Eruca vesicaria as a genetic resource for improving other crucifers. In this way, intergeneric hybrids have been obtained with Raphanus sativus L., Brassica rapa L. and Brassica oleracea L. Somatic hybrids have been obtained through the fusion of protoplasts with Brassica napus L. and Brassica juncea (L.) Czern. There are types of garden rocket which are resistant to mustard aphid and can tolerate several sorts of stress conditions as well as Fusarium oxysporum.

Garden rocket is a nutritious vegetable and although not everybody appreciates its characteristic pungent flavour, more attention should be given to its production and improvement. Sufficient genetic variation exists to be able to modify its taste. It also deserves further testing as an oil seed crop for Sahel countries and other drought-prone regions since it tolerates low rainfall conditions.