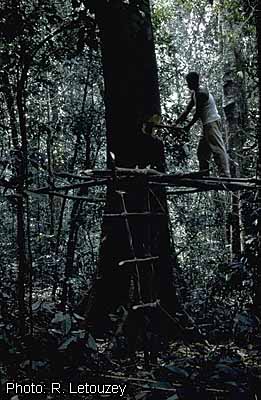 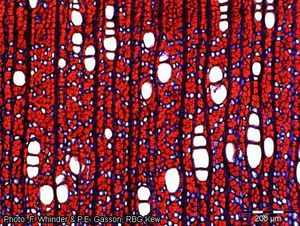 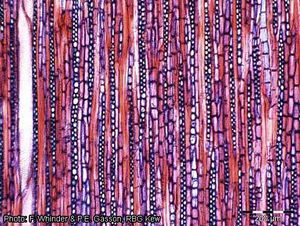 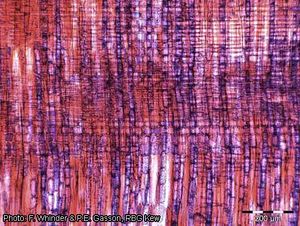 The wood known in Kenya as ‘munyenye’ and in southern Africa as ‘white bastard wood’ is locally used, mainly for poles in construction, and for joinery, furniture, tool handles and utensils. It is suitable for flooring, mine props, ship building, vehicle bodies, sporting goods, boxes, crates, agricultural implements and turnery. Locally in South Africa small Drypetes gerrardii trees with a bole diameter of 3–10 cm are popular for poles in house building and fencing. The wood is also used as firewood and for charcoal production.

In traditional medicine, a root decoction is taken to treat stomach-ache, and ground roots and leaves are administered with water to treat gonorrhoea. The flowers provide nectar for honey bees.

The heartwood is whitish, turning pale yellowish to greyish upon exposure, with occasional brownish streaks, and indistinctly demarcated from the wide sapwood. The grain is straight, occasionally slightly interlocked, texture fine and even.

The wood is medium-weight to heavy, with a density of 710–815 kg/m³ at 12% moisture content, and hard. It air dries slowly but well, with only slight end-checking and warping. The rates of shrinkage during drying are quite high. Once dry, the wood is stable in service. At 12% moisture content, the modulus of rupture is 147 N/mm², modulus of elasticity 18,230 N/mm² and compression parallel to grain 68 N/mm².

The wood saws and works moderately well with machine tools. It planes to a smooth surface. It has a tendency to split upon nailing and screwing, and pre-boring is advised. The peeling and slicing characteristics are not favourable. The wood is moderately durable. It is liable to termite attack, but in South Africa it has been recorded to be resistant to termites. The sapwood is liable to Lyctus attack, and the wood is susceptible to marine borers. The heartwood is resistant to treatment with preservatives, the sapwood is moderately resistant.

Several triterpenoids, a steroid and a flavone dimer have been isolated from the leaves.

Drypetes gerrardii is variable and some varieties have been distinguished, mainly based on leaf sizes and hairiness of young shoots and petioles.

Drypetes comprises about 210 species and is distributed throughout the tropics and subtropics. About 60 species occur in continental Africa and about 15 in the Indian Ocean islands. The wood of several other Drypetes spp. is used locally in tropical Africa.

Drypetes afzelii (Pax) Hutch. is a shrub or small tree up to 10 m tall, occurring in West Africa, from Sierra Leone to Ghana. Its greyish to pale brown wood is hard, durable and quite resistant to termites and probably used for construction. The gum from the bole is rubbed on the body because of its aromatic scent. Drypetes afzelii is classified as vulnerable in the IUCN Red List because it is uncommon and suffered from decline of its habitat, i.e. wet evergreen forest.

Drypetes arguta (Müll.Arg.) Hutch. is a shrub or small tree up to 8 m tall, occurring from Tanzania south to eastern South Africa. In South Africa small logs, with a mean length of 150 cm and mean diameter of 22 cm, are used for wall laths in building traditional houses, and the wood is used for sticks. The fruits are edible and used to make an intoxicating drink.

Drypetes aubrevillei Leandri is a small to medium-sized tree up to 25 m tall with bole up to 50 cm in diameter. It is found in West Africa, from Sierra Leone to Ghana. Its pale yellow wood is heavy, with a density of about 960 kg/m³ at 12% moisture content, and hard. It is used in house construction. The bark is used in traditional medicine; it is applied externally to treat bronchitis, lumbago, rheumatism and kidney pain, and is taken as expectorant.

Drypetes aylmeri Hutch. & Dalziel is a small tree up to 13 m tall, with bole up to 25 cm in diameter. It is also found in West Africa, from Sierra Leone to Ghana. Its whitish wood is hard, durable and quite resistant to termites, and used in house construction.

Drypetes bathiei Capuron & Leandri is a shrub up to 4 m tall, occurring in northern and eastern Madagascar. Its hard wood is used for construction, tool handles and sticks.

Drypetes caustica (Frapp. ex Cordem.) Airy Shaw is a small to medium-sized tree up to 20 m tall, endemic to Réunion and Mauritius. The wood has been used for construction, but Drypetes caustica has become rare and exploitation should be discouraged.

Drypetes floribunda (Müll.Arg.) Hutch. is a small tree up to 10 m tall, occurring from Senegal east to DR Congo in dry forest and savanna. Its whitish wood is hard and used in house construction and for poles, and also as firewood. The pulp of the orange-red fruits is edible, and twigs are used as chew-sticks for cleaning the teeth.

Drypetes gilgiana (Pax) Pax & K.Hoffm. is a shrub or small tree up to 10(–15) m tall, with bole up to 25 cm in diameter. It occurs from Senegal east to Cameroon in various forest types. Its pale brown wood is hard, and used in traps for animals and probably also for construction. The pulp of the orange-red fruits is sweet and edible, but not commonly consumed.

Drypetes gossweileri S.Moore is a medium-sized tree up to 30(–40) m tall, with bole up to 100(–120) cm in diameter, occurring from Nigeria east to the Central African Republic and DR Congo. Its pale yellowish brown wood, with a density of 760–800 kg/m³ at 12% moisture content, is commonly used in house building and for joinery. However, the applications of the bark in traditional medicine are more important.

Drypetes mossambicensis Hutch. is a shrub or small to medium-sized tree up to 20 m tall, with bole up to 60 cm in diameter. It is found in woodland, often along rivers, in Malawi, Zambia, Zimbabwe, Mozambique and northern South Africa. The pale brown to yellowish brown wood, which has a density of about 970 kg/m³ at 12% moisture content, is used for household utensils and ornaments. The fruits are edible and locally popular.

Drypetes parvifolia (Müll.Arg.) Pax & K.Hoffm. is a shrub or small tree up to 6 m tall. It occurs in West Africa from Sierra Leone to Nigeria, and in East Africa in Kenya and Tanzania. Its wood is locally used in house construction, mainly for poles.

Drypetes roxburghii (Wall.) Hurus. originates from tropical Asia and has been introduced in some regions of West and East Africa, where it is mainly planted as ornamental shade tree. In tropical Asia its wood is used for construction and turnery, whereas the leaves and fruits are used in traditional medicine and the leaves as forage.

Young leaves of Drypetes gerrardii are reddish. Larvae of the butterfly Coeliades libeon feed on the leaves. In southern Africa, flowering trees have been recorded from September to November, and ripe fruits from October to April. The fruits are eaten by animals such as birds and monkeys, which serve as seed dispersers.

The 1000-seed weight is about 12 g. In an experiment in Uganda, seeds germinated on average 39 days after sowing at a low germination rate of 17.5%.

Small-sized Drypetes gerrardii trees (up to 10 cm in bole diameter) are locally common in the forest understory in South Africa, with recorded average densities of 130 stems per ha, of which an average of 18 stems per ha are harvested to serve as poles. Trees can be coppiced. In South Africa nearly 50% of cut stems showed coppice regeneration.

Drypetes gerrardii is not only widespread but also locally common; its exploitation seems to be moderate, and therefore it is not threatened by genetic erosion, although locally over-exploitation for poles and firewood may occur.

Drypetes gerrardii and other Drypetes spp. do not play a role on the international timber market, and in view of their usually small bole size it is unlikely that this will change. However, the usually quite heavy, hard and fairly durable wood is locally important for construction, especially for poles, and research on growth rates and regeneration is recommended to draw up directives for proper management practices to ensure sustainable production.