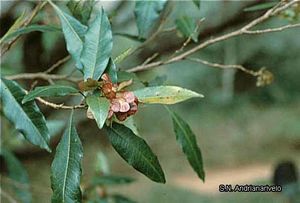 The centre of origin of Dodonaea viscosa is believed to be Australia, but it occurs throughout the tropics and subtropics. Outside Australia, two varieties have been recognized: var. viscosa, which in Africa occurs naturally along the coasts of West Africa (from Senegal to Nigeria) and East Africa (from Kenya to Mozambique), and in Madagascar; and var. angustifolia (L.f.) Benth., which occurs naturally from the Democratic Republic of Congo in the west to Ethiopia and Somalia in the east, and South Africa in the south, and also in Madagascar. The latter variety is cultivated in Ghana, Nigeria and Cameroon. Both varieties are pantropical.

Dodonaea viscosa is not an obvious plant for deliberate planting, but its widespread range and similar patterns of uses in different countries may be partly explained through human distribution.

Dodonaea viscosa has many uses. It is a traditional medicine worldwide, administered orally or as poultice to treat a great variety of ailments. Stem or leaf infusions are used to treat sore throats; root infusions to treat colds. The stems and leaves are used to treat fever, and seeds (in combination with those of other plants and coated in honey) to treat malaria. The stems are used as fumigants to treat rheumatism. The leaves are used to relieve itching, and a lotion made from unspecified plant parts to treat sprains, bruises, burns and wounds. Digestive system disorders, including indigestion, ulcers, diarrhoea and constipation are commonly treated in traditional medicine with an orally-administered decoction of either the leaves or roots. Trachoma is treated with applications of leaf juice, and powdered leaves are given to expel roundworms. Pulverized roots are a component of anthelmintic preparations. The roots, either in decoction or fresh, are taken by women in East Africa to stimulate milk production after giving birth and to treat dysmenorrhoea and irregular menstruation. In Ethiopia women make an amulet of Dodonaea viscosa and other plants wrapped in red silk thread and worn around the thigh to ward off infertility.

The wood of Dodonaea viscosa is used for tool handles, tools, brooms, digging sticks, spears, clubs and poles; when available in large sizes, also for posts and frames for permanent structures and in Kenya to make ribs of dhows. Throughout its range Dodonaea viscosa is an important source of fuelwood; in East Africa it is favoured for the production of charcoal. In some areas twigs are used as toothbrushes.

Dodonaea viscosa is used in reforestation, reclamation of marshes and degraded land, and as a soil stabilizer. It makes a good live fence for dry areas and is planted as a windbreak. It is commonly cultivated as an ornamental throughout its range on account of its abundant fruiting and glossy leaves. Cultivars with leaves ranging from bluish-red, pink and red to yellowish-green have been developed. The leaves and fruits are also used in making garlands. It makes a sturdy hedge that withstands clipping and is amenable to topiary work.

In tropical Africa Dodonaea viscosa is browsed by livestock and camels and used as an emergency fodder during the dry season. It is a source of nectar and pollen for honey. The seeds yield a fish poison.

Other uses include stuffing and binding mattresses in Peru using stem-fibre and leaf-resin, while in Papua New Guinea leaves are packed into walls of houses for insulation. In Australia the tannin from the bark is used for tanning skins; the bark is, however, considered to be a tanning material of inferior quality. The fruits are used in pot-pourri and, in the past, they have been used as a substitute for hops in yeast production and beer making in Iraq and Australia.

Dodonaea viscosa is mainly grown or collected for domestic or local use, but the leaves are sold in local markets for medicinal purposes in South Africa and Mexico.

The use of Dodonaea viscosa in traditional medicine is reflected, in some instances, in the plant's pharmacological properties. Essential oils and extracts obtained from the leaves exhibited antibacterial and hypotensive activities. Aqueous and alcoholic extracts were found to exhibit cardiac depressant and coronary-constricting properties, and slight anthelmintic activity. A saponin mixture from the seeds has been shown to have phagocytosis enhancing, analgesic and molluscicidal (including against the schistosomiasis-transferring snail Biomphalaria glabrata) properties. The use of the seeds as a fish poison is supported by the presence of triterpene saponins.

A number of 3-methoxy flavones derived from quercetin and kaempferol in the seeds, bark, inflorescences and leaves exhibited pronounced antiviral activity and were active in tissue cultures against polio-, rhino- and picorna-viruses.

Spasmolytic activity could arise from the presence of some diterpenes, sakuranetin, quercetin and rutin in the seeds, bark, inflorescences and leaves. A chloroform-methanol extract from aerial parts was found to inhibit the spontaneous contraction of the intestinal smooth muscle of isolated rat and guinea-pig ileum in a concentration-dependent manner. This could explain the use of Dodonaea viscosa preparations to alleviate gastrointestinal disorders. The isolated coumarin fraxetin has attracted some attention as an anti-oxidant, and it displayed analgesic properties in tests with mice. In addition, various extracts of Dodonaea viscosa showed insecticidal activity against the cotton leafworm Spodoptera littoralis.

The wood is extremely hard and close grained; it makes a good fuelwood as it can be easily ignited and is slow and hot to burn. The energy value is about 19,225 kJ/kg. The wood is resinous and flexible, though tough and rather laborious to chop; it is fairly resistant to termite attack. The heartwood is dark brown, with an irregular outline, sometimes mottled with black. The sapwood is pale. The wood is very heavy, 1200–1250 kg/m³.

The genus Dodonaea comprises about 60 species, which are almost all restricted to Australia, suggesting Australia is an evolutionary centre of dispersal. In Australia, Dodonaea viscosais described as having seven subspecies, which are largely geographically distinct. In tropical Africa, 2 varieties of Dodonaea viscosa are distinguished: the coastal var. viscosa, which has usually bisexual, whitish flowers, a strongly 2-lobed scar of fallen sepals beneath the fruit and not or only slightly compressed seeds, and the mainly inland var. angustifolia (L.f.) Benth., which has usually shorter and narrower leaves, usually unisexual, greenish-yellow flowers, a more or less annular scar of fallen sepals beneath the fruit and more compressed seeds. These differences are sometimes considered sufficient to distinguish 2 separate species, the latter variety given specific rank (as Dodonaea angustifolia L.f.).

Dodonaea viscosa produces large quantities of seed at an early age. It is capable of flowering and setting viable seed within three years of establishment. The number of seeds per kg is about 100,000. The mean germination of seed will be greater than 75% under optimal conditions. In East Africa the germination rate is recorded as 30–70% after 15 days. Flowering occurs almost all the year round throughout its geographical range, but most populations flower in spring and summer. Pollination is probably by wind, although bees have been observed to collect pollen. The fruits take 10–11 months to mature after flowering. They are broad winged, giving the impression of being dispersed by wind.

Dodonaea viscosa var. viscosa occurs in coastal bushland, on the landward side of mangrove forest, on sand dunes and coral rock mostly just above the high water mark. In East Africa it is also found in Casuarina woodland, Grewia glandulosa Vahl scrubland and plantations up to an altitude of 75 m. Var. angustifolia occurs in grassland, bushland, woodland or forest on lava, often in rocky places, stony hillsides and disturbed areas up to 2700 m, generally above 1000 m. Dodonaea viscosa is a pioneer species that will readily colonize open areas, abandoned gardens or secondary forest. It is tolerant of salinity, drought, strong winds and pollution.

Dodonaea viscosa regenerates profusely by seed, germination being enhanced by both fire and soil disturbance. The seeds are desiccation tolerant and maintain high levels of viability for long periods when dry. Pre-treatment of the seed by scarification, nicking the seed coat, or with boiling water promotes germination. Rains must follow germination to ensure seedling survival. Plantations can be established by direct sowing or by using nursery-raised seedlings. Propagation by stem cuttings has been practised successfully.

Dodonaea viscosa is rarely cultivated except as a garden plant. Mature plants are fast growing and require little or no management once established. They can resprout from the stem base and recover well after cutting and light fires. However, their ability to regenerate from underground stems is not well developed. Furthermore, juvenile plants are more susceptible to damage by fire than older shrubs. For ornamental purposes shrubs are pruned to improve their appearance; cutting into old wood should be avoided.

Dodonaea yellow disease, a disease similar to the ‘spike’ disease of sandalwood (Santalum album L.) affects Dodonaea viscosa. It is probably caused by phytoplasma-like organisms. Diseased plants have a bushy appearance with smaller leaves reminiscent of witches' broom, and flowering and fruiting cease. If severely infected the plants die. Several diseases are of local importance, such as leaf blight, leaf spot disease and powdery mildew. Dodonaea viscosa is a host of the root-knot nematode Meloidogyne incognita, which can affect many cultivated crops. In India, Dodonaea viscosa is affected by the castor semi-looper (Achaea janata), which also affects Ricinus communis L. and fruit trees such as Citrus. In South Africa, the tree is often infested with a white scale, and in South Australia leaves and branches are damaged by a gall midge.

Fruits, leaves, bark and wood of Dodonaea viscosa are collected whenever the need arises.

Dodonaea viscosa is common and extremely widespread and not threatened. It is represented in some seedbank collections, and selections for ornamental purposes are sometimes marketed.

The potential of Dodonaea viscosa in medicine requires further research, especially with regard to its pharmacological properties. A number of compounds (e.g. fraxetin, sakuranetin and some diterpenes) may provide interesting leads for pharmacological evaluation and therefore merit further research. The ability to regenerate quickly in poor soils makes this species suitable for reclaiming denuded land. There is also potential to increase its use as a fuelwood. Indeed, in Uganda, it has been recommended for planting for firewood in the highlands of Kabale where it would also be useful in stabilizing soil-conservation structures. The ability of the timber to resist termite attack makes Dodonaea viscosa potentially important for use in constructions in tropical Africa.