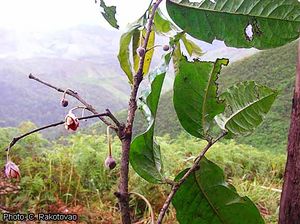 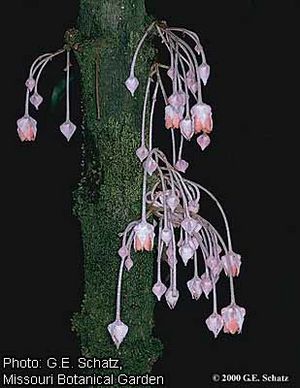 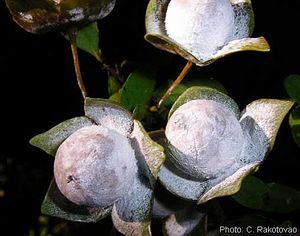 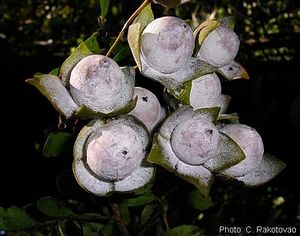 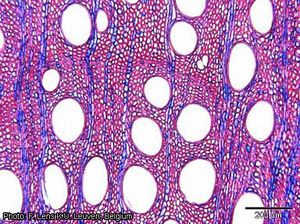 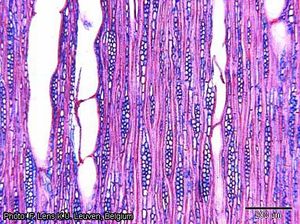 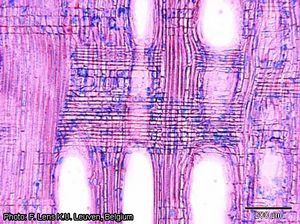 Diospyros gracilipes is endemic to Madagascar, where it is widespread in the northern and eastern parts of the island.

The black heartwood, known as ‘hazomainty’, is used for high-quality joinery, furniture, musical instruments, pegs, ornaments, inlay work, handles, carvings and turnery. The bark, leaves and fruits are used in mixtures to stimulate contractions of the uterus during childbirth, and as an abortive. This practice is not without danger; fatal cases have been reported.

Export of Madagascar ebony started in the 16th century by the Portuguese. Together with rosewood (from Dalbergia spp.), ebony from some Diospyros spp., of which Diospyros gracilipes is one of the most important, is considered the most precious and valuable wood in Madagascar. It fetches extremely high prices, even when traded in smaller dimensions. In recent years, the export of Madagascar ebony, as well as that of rosewood, is nearly entirely to China.

Distinction between Diospyros spp. of Madagascar producing black ebony is usually not made, and the wood properties are said to be quite similar. The heartwood near the centre and base of old boles is black, sometimes with whitish streaks, and distinctly demarcated from the whitish sapwood which becomes yellowish upon exposure. The grain is usually straight, sometimes wavy to slightly interlocked, texture very fine. The wood is heavy, with a density of 900–1100 kg/m³ at 12% moisture content. It dries rather slowly, with little tendency to distort. It takes about 4 months to air dry boards of 2.5 cm thick. The rates of shrinkage are moderately high, from green to oven dry about 4.5% radial and 9.2% tangential. Once dry, the wood is stable in service. At 12% moisture content, the modulus of rupture is about 190 N/mm², modulus of elasticity 22,700 N/mm², compression parallel to grain 63 N/mm² and Chalais-Meudon side hardness 12.

The wood is fairly easy to saw and work, but needs high-power tools because of its high density, abrasiveness and presence of silica (about 0.1%). It takes a smooth and nice finish without the use of a filler. It has a tendency to split upon nailing and screwing, and pre-boring is recommended. The wood is durable; it is resistant to impregnation with preservatives.

The exudate from the bark may cause black marks and vesicles on the skin.

Diospyros gracilipes is variable and some varieties have been distinguished. It grows slowly and tolerates shade. It usually flowers in May–June and September–December and fruits ripen 3–6 months later. Ripe fruits are eaten by lemurs, which may disperse the seeds.

Diospyros is a large pantropical genus of about 500 species; in mainland tropical Africa about 90 species occur and several produce valuable timber or edible fruits. Over 100 species have been recorded for Madagascar, several of which provide valuable ebony wood, and possibly the total number of species is around 200. About 14 species are endemic to the Mascarene islands.

Diospyros platycalyx Hiern is also reported to provide blackish heartwood, but is also under high pressure caused by exploitation in its distribution area in western Madagascar.

Diospyros tessellaria Poiret is as small to medium-sized tree up to 20 m tall, with slender, straight bole, endemic to Mauritius. It provided the ebony of commerce of Mauritius (‘bois d’ébène noir’), but larger trees have nearly all disappeared from the forests.

The 1000-seed weight is 600–650 g. Germination starts 3–7 weeks after sowing and the germination rate of fresh seed is about 65%. The seeds are extracted from the fruit and usually sown in pots or polythene sacs. Propagation by root suckers is possible. The tree coppices well. Enrichment planting of natural forest with Diospyros gracilipes is sometimes practised.

Large-scale unauthorized logging of Madagascar ebony occurs in the forests of Madagascar. In 2009 large amounts of ebony trees were logged in Madagascar, together with even larger amounts of rosewood (Dalbergia spp.) trees, and the export was mainly to China. Only small quantities were shipped to Germany and Mauritius.

Several Diospyros spp. in Madagascar are being considered for inclusion in the CITES Appendix II list, including Diospyros gracilipes, Diospyros perrieri and Diospyros platycalyx.

Most Diospyros spp. providing valuable black ebony wood in Madagascar and the Mascarene islands are under strong pressure caused by over-exploitation. Sustainable production of this type of timber is unlikely on a commercial basis because the black heartwood is only available in the bole core of old trees; moreover, the trees grow slowly. Enrichment planting might be an option, but will require very long rotation cycles. Because of the high value of the wood, studies on optimal management could be useful, but for the time being protection measures are needed.