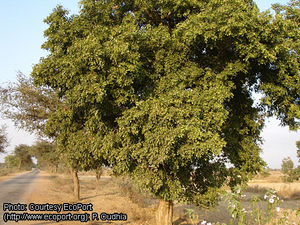 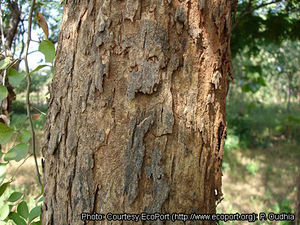 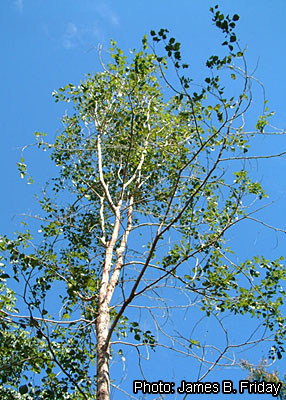 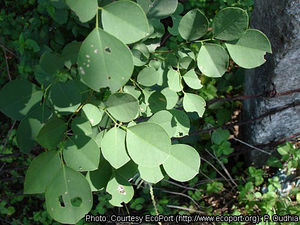 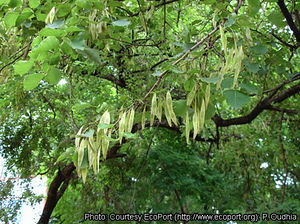 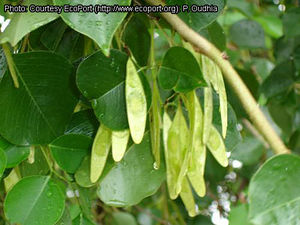 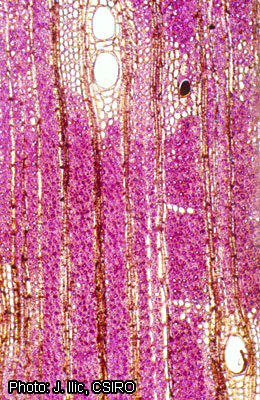 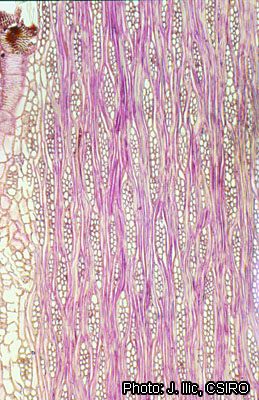 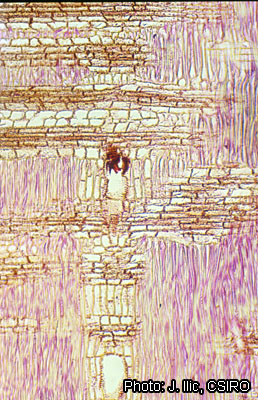 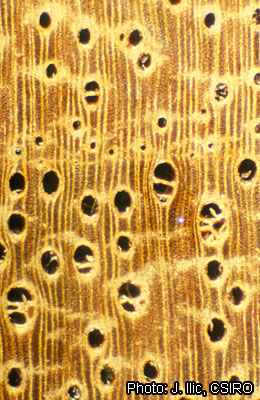 Dalbergia sissoo is native to the Himalayan foothills in northern India. It is planted in many areas in Asia and elsewhere in the subtropics and tropics, including Africa where it has been recorded for many countries. It is naturalized or subspontaneous in many areas in western and central Asia and occasionally elsewhere, also in tropical Africa.

The wood is suitable for house construction, e.g. for door and window shutters and frames, flooring and panelling, and also for cabinet making, vehicle bodies, boat building, handles, implements such as shoe lasts, turnery, carving, veneer and plywood. It is excellent for high-class bentwood furniture, walking-sticks, umbrella handles and other bentwood articles. It is highly valued as firewood and for charcoal production. Pulp from the wood is suitable for papermaking.

Dalbergia sissoo is used as a shade tree in agroforestry systems in India and Pakistan, for afforestation of eroded soils, and as a soil improver that fixes nitrogen and provides mulch. It is also planted as a windbreak and shelterbelt, and as an ornamental and roadside tree. The foliage and young pods are useful as fodder, although it has been reported that fresh leaves may cause digestive disorders in livestock during the dry season. A non-drying oil which is suitable as a lubricant for heavy machinery can be obtained from the heartwood.

Powdered wood, leaves and seed oil are used in traditional medicine in India, especially to treat skin diseases. In tropical Africa, leaves are reportedly used as a stimulant and to treat gonorrhoea and wounds.

In India Dalbergia sissoo timber is valuable, with an average price about as high as that of teak. Sliced plywood is exported.

Good-quality Dalbergia sissoo wood resembles that of Dalbergia latifolia Roxb. and may also be called ‘Indian rosewood’. However, especially plantation wood of Dalbergia sissoo is often of a lower quality and less decorative. The heartwood is golden brown to dark brown, often with deep brown streaks, and distinctly demarcated from the whitish to pale brown sapwood. The grain is straight, sometimes interlocked, texture moderately coarse. The wood density is 750–800 kg/m³ at 12% moisture content. Air drying should be done carefully and slowly because the wood easily splits at the ends during drying. Boards of 2.5 cm thick take 12–15 days to kiln dry from green to 12% moisture content. The rates of shrinkage from green to oven dry are 2.7–3.4% radial and 4.9–5.6% tangential. Once dry, the wood is very stable in service.

The wood is fairly easy to saw and work. It can be planed to a smooth surface and takes an excellent polish. Turning, screwing, polishing and gluing give good results, and the wood can be peeled or sliced to make decorative veneer and plywood. The heartwood is durable, but the sapwood is liable to damage by insects and fungi. The energy value of the wood is about 21,800 kJ/kg.

The crude protein content of leaves is 12.5–24% on a dry weight basis. Wood, roots and leaves showed insecticidal activity. Ethanolic leaf extracts showed significant anti-inflammatory activity in tests with rats, without side effects on gastric mucosa.

Dalbergia is a large pantropical genus comprising about 250 species. Tropical Asia and tropical America each have about 70 species, continental Africa about 50 and Madagascar slightly over 40. Dalbergia sissoo resembles Dalbergia latifolia, which can be distinguished by its leaflets which are rounded or notched at apex, and by its broader pods.

Seedlings and saplings of Dalbergia sissoo have a strong taproot with numerous fibrous lateral roots, some of which may later develop into large superficial roots. Young trees may grow fast; under exceptional conditions, they may reach 3.7 m in 1 year, 11 m in 5 years and 15 m in 10 years, but usually they reach 5 m in 5 years, 10 m in 10 years and 17 m (with a mean bole diameter of 25 cm) in 20 years. An annual volume increment of 22.5 m³/ha has been recorded for young plantations on favourable sites in Pakistan, although 10–17 m³/ha is more usual. Consequently, during the 1970s African foresters had high hopes of Dalbergia sissoo, but they were often disappointed because growth was lower than expected. In 8-year-old Dalbergia sissoo plantations in Burkina Faso, for instance, the annual volume increment was estimated at 6.5 m³/ha. In 8-year-old plantations in northern Côte d’Ivoire the survival rate was over 90%, the height 5–6 m and the stem diameter 6–10 cm. In experimental 6-year-old plantations in Tanzania young trees of the best provenance planted at a spacing of 2.5 m × 2.5 m had a survival rate of 96%, a mean height of 3.1 m and a mean stem diameter of 3.75 cm. In northern Cameroon the early survival and growth were satisfactory but after 18–20 years only a few trees survived. In dry West Africa the only cases of real success are ornamental plantations or isolated trees.

Dalbergia sissoo trees are often surrounded by numerous root suckers. It is a strong light demander and only vigorous trees attain larger sizes in dense stands, suppressing weaker trees. Trees may start flowering at an early age; in experimental plantations in Tanzania they started to flower 3 years after planting. In savanna regions in West and Central Africa, trees usually flower in the second half of the dry season, together with new flushes of leaves. The flowers are much visited by bees. The thin pods are dispersed by wind. Dalbergia sissoo nodulates with nitrogen-fixing Rhizobium bacteria.

In its native area of distribution in subtropical Asia, Dalbergia sissoo occurs in open deciduous forest, on alluvial soils which are periodically inundated and along rivers, up to 1500 m altitude. It colonizes localities disturbed by flooding or erosion. Older trees are very drought-resistant and can withstand up to 9 dry months and mean annual rainfall of only 400 mm. In Africa Dalbergia sissoo is often planted in regions with 600–900 mm annual rainfall, which is too dry for most other timber species. However, for optimal growth more than 1000 mm of annual rainfall is required. Dalbergia sissoo tolerates minimum temperatures of –4°C. It is not fire-resistant. It prefers porous, light-textured, acidic to neutral soils with adequate moisture. Growth is retarded on badly drained or stony soils.

Dalbergia sissoo can be propagated by seed. The 1000-seed weight is 18–25 g. When stored dry or in a cold store, seeds remain viable for up to 1.5 years. Usually seeds are not extracted from the pods, but the pods are broken into 1-seeded pieces. Seeds have no dormancy, and the germination rate may be almost 100% when fresh seed from mature trees is used. Pre-treatment of seeds is not necessary, but soaking in water for 12–24 hours accelerates germination. Germination of fresh seed takes 7–21 days. In Senegal shading is recommended during the hottest hours of the day during the germination period.

Stump planting is very successful, using stumps from 0.5–2-year-old seedlings with a root length of about 25 cm and a shoot length of about 7.5 cm. In India successful methods of tissue culture have been developed, and in-vitro mass multiplication of Dalbergia sissoo is carried out from callus of shoot tips and shoot segments. Root suckers and root and stem cuttings can also be used for propagation.

For timber production, Dalbergia sissoo is grown in pure stands, usually managed by clear felling followed by artificial regeneration; spacing varies from 1 m × 2 m to 3 m × 3 m. In agroforestry systems it is intercropped with annual crops and it is planted at a spacing of 4.5 m × 4.5 m or wider.

Regular weeding is necessary for several years. Pruning of young trees helps to produce clear boles. First thinning is recommended 5–6 years after planting, and subsequent thinning after 15 and 20 years to a final density of 200 stems/ha. In India and Pakistan rotations of 10–22 years are used for fuelwood production in irrigated plantations, and rotations of 40–60 years for good-quality timber.

Trees can be coppiced, although it has been observed that coppiced trees lose vigour after 2–3 rotations. Pollarding of ornamental trees is successful in northern Cameroon. Dalbergia sissoo is very invasive, showing pioneer characteristics, and can become a serious weed, as has been the case in Australia.

Fusarium solani and Fusarium oxysporum cause widespread damage to plantations in Asia, especially in localities with clayey soils and subject to regular waterlogging. The symptoms are inward rolling of young leaves, dieback and discoloration of other leaves, and formation of red streaks on outer layers of the sapwood. Ganoderma lucidum causes root rot, usually in older trees, and several other fungi attack the leaves, causing leaf spot, leaf blight and powdery mildew diseases. Leaf rust fungi (Uredo sissoo and Maravalia achroa) may be pathogenic in nurseries. Serious dieback due to diseases has been reported for Nepal.

The trees are attacked by various insects such as leaf miners, defoliators and stem-borers, but this causes no serious problems for trees grown under favourable conditions. Parasitic weeds (Tapinanthus spp.) affect Dalbergia sissoo in northern Cameroon. To control this parasite it is necessary to cut the branches that have been attacked.

There are no indications that Dalbergia sissoo is subject to genetic erosion. In the wild it behaves as a pioneer species in dynamic habitats, and it is planted widely and regularly escapes from cultivation. Small germplasm collections exist in Burkina Faso, Nigeria and Ethiopia, with in total about 10 accessions.

Considerable variation in stem form and growth rates has been noticed, even in 1-year-old seedlings. This indicates ample possibilities for selection and breeding to obtain superior timber plantation trees adapted to specific climatic and soil conditions. In Nepal, India and Bangladesh tree improvement programmes for Dalbergia sissoo already exist.

Dalbergia sissoo is a multipurpose tree suitable for incorporation in agroforestry systems, not only to provide useful products as timber, firewood and forage, but also to improve the soil, control erosion and protect crops from adverse weather conditions. Moreover, it is suitable for semi-arid regions, it is easy to propagate and it shows rapid growth in comparison with other Dalbergia spp., and as such it certainly is of interest for larger-scale application in Africa. Its major drawbacks are the usually poor bole form and its susceptibility to fire and Tapinanthus. Tests in Tanzania showed that the choice of provenance is of major importance for the results of plantations in specific ecological and climatological conditions, emphasizing the desirability of large germplasm collections in Africa and the relevance of field testing of provenances before plantations are made.