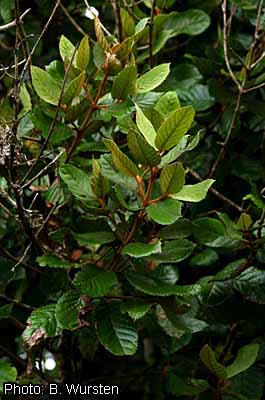 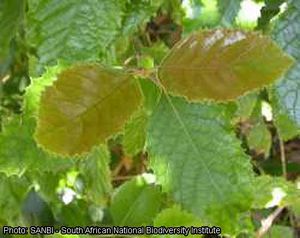 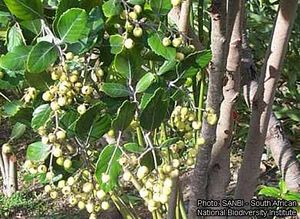 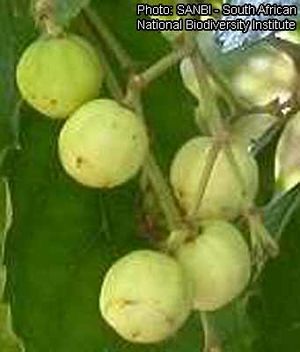 Bark extracts are used in traditional medicine, especially by Zulu people, to treat diarrhoea and stomach complaints, to purify the blood, and as aphrodisiac. The bark is also used to treat pimples and in skin lighteners. It has been used for tanning leather. Curtisia dentata is planted as ornamental in gardens and in hedges.

In 1998 the annual trade of Curtisia dentata bark in KwaZulu-Natal Province (South Africa) was estimated at 23.9 t.

The heartwood is greyish brown to purplish red and not distinctly demarcated from the slightly paler, fairly wide sapwood. The grain is straight, texture fine and even. The wood is heavy, with a density of 870–930 kg/m³ at 12% moisture content. It is difficult to dry, often developing deep cracks on the surface. Very mild schedules are needed in kiln drying. The rates of shrinkage are rather high. Once dry, the wood is stable in service.

The bark contains up to 21% of tannin, which is probably responsible for the medicinal properties against diarrhoea. Lupeol, betulinic acid, ursolic acid and 2α-hydroxyursolic acid have been isolated from the leaves; the three latter compounds showed pronounced antifungal activity, especially against Candida albicans. Leaf extracts also showed considerable antibacterial activity against a wide panel of bacteria.

Trees grow comparatively slow under natural conditions, but may be fast-growing in cultivation. They flower from October to March. Curtisia dentata is almost entirely self-pollinating. Fruits ripen 6–10 months after flowering, but they often develop sporadically. They remain on the tree for a long time and are eaten by birds, monkeys and wild pigs, which may act as seed dispersers; the lourie and the bush dove have been recorded as the main seed dispersers.

Curtisia comprises a single species. It has long been included in Cornaceae, but recently it has been classified in its own family Curtisiaceae, mainly because of differences in anatomy of the ovary. Phylogeny reconstruction based on molecular data grouped Curtisia close to Grubbia, a genus of 3 shrub species endemic to southern South Africa, and it has been suggested to place both genera in Grubbiaceae, also because of morphological similarities; however, the fruits are completely different.

The germination rate of fresh seed is about 50%. Under natural conditions seeds take 6–12 months to germinate after the fruits have fallen. When the fleshy fruit pulp is removed, germination may start after 3–4 weeks. For good growth, seedlings should be planted in deep, fertile soil with plenty of compost, lightly covered with soil, and under light shade. They are susceptible to drought; regular watering is needed until the young trees are about 3 years old. Once established, the tree can withstand moderate drought. Seedlings and saplings are sensitive to frost.

Curtisia dentata occurs scattered in the forest and is never dominant or even co-dominant. Trees respond to harvesting by producing vigorous coppice shoots, both from wounds in the bark as well as from stumps. Root suckers may also develop. The centre of boles is often defective with purplish brown heart rot due to incipient decay. Therefore, logs are often quarter-sawn before drying and the central portion of the bole is often discarded. Trees are often heavily parasitized by fungi and insects. The seedlings are liable to attack by damping-off fungi.

Curtisia dentata occurs only very locally in tropical Africa. In South Africa it has a wider distribution, but taller specimens have become rare because of exploitation for its timber in the past. The popularity of the bark as medicine also contributes considerably to the existing pressure on populations of Curtisia dentata. In KwaZulu-Natal Province in South Africa, the species has already been considered as vulnerable and declining in 1988 because of over-exploitation of the bark.

Curtisia dentata is too uncommon in tropical Africa to have prospects as a commercial timber tree. This seems also the case in South Africa, where it is more widespread and common, because large trees have become rare because of over-exploitation and because of the rather slow growth under natural conditions. It seems to have much better prospects as ornamental shrub or tree. It deserves more research attention concerning its pharmacological properties. Recent investigations demonstrated pronounced antibacterial and antifungal properties, supporting the use of Curtisia dentata in traditional medicine.