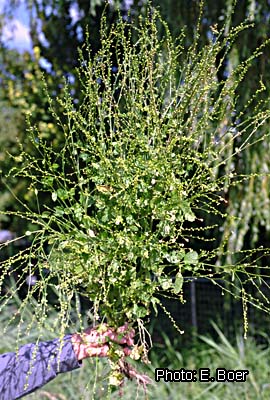 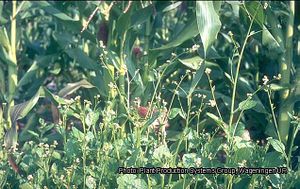 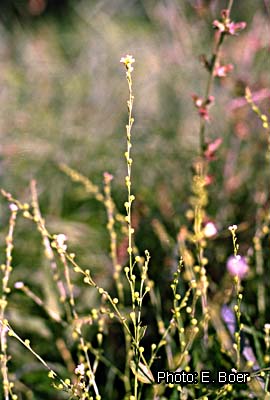 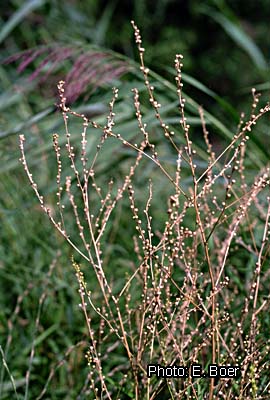 detail of plant with dry stalks and fruits

Crambe hispanica occurs naturally in Mediterranean Europe, Morocco and the Middle East. Its native distribution extends into the highlands of Ethiopia, Eritrea, Uganda, Kenya, Tanzania, Rwanda and easternmost parts of the DR Congo. In Ethiopia it is traditionally grown on a small scale as a medicinal plant and minor oil crop. Crambe was first tested as an oil crop in the former USSR in the 1930s. From there, interest in crambe as a new, alternative crop spread to Sweden and Poland and later to other parts of Europe, North America and China. Thus, crambe is being developed as a cool-temperate oil crop although it occurs naturally in the subtropics and tropics.

Crambe is grown for its seed oil which is rich in erucic acid. Crambe oil is used industrially as a lubricant and cooling agent. Erucic acid is easily modified and its chemical derivatives are valuable raw materials in the the production of lubricants (erucamide), plasticizers, surfactants, corrosion inhibitors, rubber additives, nylons, paints, hydraulic and dielectric fluids, pharmaceuticals and cosmetics. The presscake, although rich in glucosinolates, can be used as a feedstuff for ruminants. The presscake is also applied as a fertilizer. Glucosinolates extracted from the seed are being tested pharmaceutically. In Ethiopia the fruits are used in traditional medicine to treat snake bites. The leaves are eaten in Kenya.

Few data on production and trade of crambe are available. Soon after its introduction as an oil crop in Poland it was cultivated there on 25,000 ha, but no recent data are available. In the United States production increased rapidly to 25,000 t seed from 22,500 ha in 1993, but then declined rapidly again; the main centre of production of crambe is North Dakota. Difficulties in organizing commercial oil extraction and lack of government support have contributed to the decline. More comprehensive recent statistics are not available.

The approximate composition of 100 g of crambe fruit is: water 7 g, crude fat 33 g, protein 17 g, crude fibre 14 g, N-free extract 23 g and ash 5 g. Hulls make up about 30% of the weight of the fruit. Crambe oil has the highest content of erucic acid (50–60%) of all crops; other fatty acids include oleic acid (about 17%), linoleic acid (about 9%) and linolenic acid (about 5%). Nearly all erucic acid in crambe oil is esterized with C-atoms 1 or 3 of the glycerol moiety. It can be selectively hydrolyzed, yielding almost pure erucic acid.

The approximate composition of defatted seed cake made from whole seed is per 100 g dry matter: protein 28 g, crude fibre 22 g, N-free extract 40 g and ash 8 g; 100 g seed cake made from dehulled seed contains approximately: protein 50 g, crude fibre 7 g, N-free extract 36 g and ash 10 g. Crambe cake contains about 5% glucosinolates, which are nitrogen and sulphur containing organic compounds that release cyanogenic acid on decomposition. The main glucosinolate (over 90% of the total) is epi-progoitrin (2-hydroxy-3-butenyl glucosinolate), a stereoisomer of progoitrin which occurs in rapeseed. Glucosinolates and their derivatives are toxic or appetite suppressing to animals, but ruminants exhibit a degree of tolerance. In the United States, the Food and Drug Administration allows the addition of 5% crambe meal to cattle feed. Methods of detoxification have been developed, but the small amounts of epi-progoitrin remaining in detoxified meal may still be toxic or appetite suppressing to monogastric animals, especially pigs. However, from tests with mice it was concluded that crambe may exert protective effects against tumour formation and growth.

The oils of Brassica napus L. and Brassica rapa L. (rapeseed oil) both contain large amounts of erucic acid. Cultivars especially rich in erucic acid have been bred. Their erucic acid content is lower than that of crambe, but their yields are higher and they are better adapted to warm temperate climates.

Crambe, with about 35 species, is one of the largest genera of the tribe Brassiceae. Crambe hispanica is included in the section Leptocrambe DC., together with 4 other species from the Mediterranean and East African region. In the literature it is generally referred to as Crambe abyssinica. The differences (kidney-shaped to cordate terminal lobe of the lower leaves and upper fruit part without ribs in Crambe hispanica versus obovate to ovate-rhomboid terminal lobe and slightly 4-ribbed upper fruit part in Crambe abyssinica) are considered insufficient to distinguish Crambe abyssinica as a separate species. However, it is distinguished as a subspecies: subsp. abyssinica (Hochst. ex R.E.Fr.) Prina. Two other subspecies are distinguished: subsp. hispanica from the eastern Mediterranean region, and subsp. glabrata (DC.) Cout. from the western Mediterranean region.

Crambe has orthodox seeds with usually about 4 months dormancy. Once the dormancy is broken, the seeds take 1–2 weeks to germinate at temperatures of 10–20°C. Germination is retarded below 8°C and inhibited below 5°C. Early growth is rapid. Plants reach the 2-leaf stage 6–12 days after germination and the 6-leaf stage after 15–27 days. Inflorescences develop from the 10–13th node upwards. Flowering starts 33–42 days after germination. Crambe is mainly self-pollinated, but about 15% cross-pollination occurs. Leaf growth virtually stops soon after flowering and the onset of anthesis generally coincides with maximum leaf area index and biomass accumulation rate. Early senescence of the foliage is a major factor in the low yield capacity of crambe, especially because the surface area of the fruits is small and can intercept only at most 25–35% of incident radiation. Physiological maturity is reached after about 80 days.

Little is known about the natural occurrence of Crambe hispanica in tropical Africa. It is found on grassland and waste ground, and as a weed in agricultural fields at 1200–2600 m altitude. Although young seedlings are tolerant of –5.5°C for a few hours, frost is generally not tolerated. The best temperature range for vegetative growth is 10–25°C, but higher temperatures are well tolerated. Crambe can be grown up to 2500 m altitude in the tropics, provided a frost free period of 90 days is assured. For commercial production, an annual rainfall of 800–1500 mm is required. Once established, crambe tolerates periods of drought as long as soil moisture is adequate during the flowering and fruit setting stages. A dry period prior to fruit maturity is beneficial. Crambe is more tolerant of drought than maize, soya bean and mustard crops. Crambe grows best on well-drained fertile loamy soils of pH 6.0–7.5. Soils with poor internal drainage should have good surface drainage. Soil crusting can seriously affect germination and seedling growth. Crambe is moderately tolerant of salinity.

Crambe is propagated by seed. The weight of 1000 seeds is about 7 g. Seed rates vary from 10–25 kg/ha. A fine, firm seedbed is required for even germination and vigorous seedling growth. Seed is placed at a depth of 2 cm. Wind erosion should be avoided or controlled as drifting soil easily damages seedlings.

Fertilizer recommendations for crambe have not yet been developed. Rates recommended for Brassica oilseed crops can be used. A high plant density is the best way to control early weeds in crambe. However, weeds may develop later in the maturing crop and cause difficulties with harvesting and moisture content of the seed. Crambe is very sensitive to herbicides and is easily affected by herbicide drift.

The main disease of crambe in North America is Alternaria brassicola. Control is possible by treating seed with a fungicide or with hot water (60°C for 20 minutes). Other potential diseases are Fusarium wilt, Sclerotinia white mould and Pythium rot. Susceptibility to tobacco mosaic virus (TMV) and turnip mosaic virus (TuMV) has been reported. Seedlings may be attacked by flea beetles and aphids. Grasshoppers seem to avoid them when alternative sources of food are available.

When crambe fruits approach maturity, the leaves turn yellow and drop; a few days later the fruits and small branches turn straw-coloured. When the last seed-bearing branches have turned colour, the crop is ready to harvest. Timely harvesting is important to avoid excessive shattering. Swathing may be necessary in an unevenly ripened crop. However, early swathing results in a low erucic acid content of the oil.

In the United States, commercial yields of crambe seeds are 1300–2000 kg/ha, but up to 3500 kg/ha has been obtained in trial plantings.

Transport costs of crambe seed are high because of its low bulk density. Hulling of crambe fruit is possible but more difficult than in fruits of Brassica oil crops, and is hard to carry out in the field. Hulling is not necessary for oil extraction, but gives the presscake a higher value as cattle feed. Before oil extraction the fruit is crushed and heated. The heating process should be carefully controlled as it has major effects on the palatibility and toxicity of the presscake. Subsequently the oil is extracted by mechanical pressing followed by solvent extraction or by solvent extraction alone. Heat treatment or extraction with water of the presscake may improve its quality by reducing its content of antinutritional and toxic substances. However, the treated presscake is still only suitable for ruminants.

The potential yield of erucic acid from crambe is still low in comparison with other crops such as Brassica napus L. The main objective of breeding programmes is therefore to increase yields. Factors limiting potential yield include photosynthetic efficiency during the grain filling stage. Inheritance of seed yield, however, has been found to be low. Cultivars released include: ‘Meyer’, ‘BelAnn’ and ‘BelEnzian’ in the United States, ‘Galactica’ in the Netherlands and ‘Charlotte’ and ‘Carmen’ in France.

Great steps have been made in the development of crambe as an industrial oil crop for temperate regions. It fits well in crop rotations and can be grown using common practices. However, other crops yielding erucic acid and technologies to separate erucic acid from their oils are also being developed. Advantages of crambe are that it is more tolerant of heat and drought, resistant to flea beetles and it can be combine-harvested without swathing. However, only if research can increase the yield potential of crambe sufficiently to compete with other crops can it become a viable choice for farmers. As there are no indications of day-length sensitivity, it could become a suitable crop for the highlands of tropical Africa.