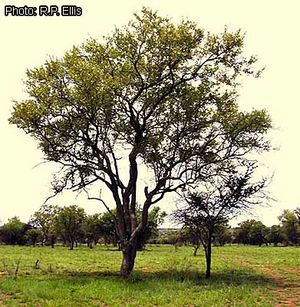 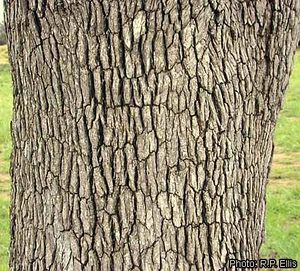 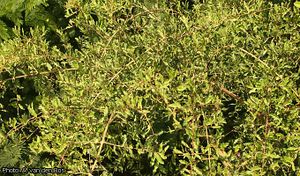 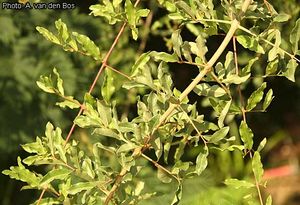 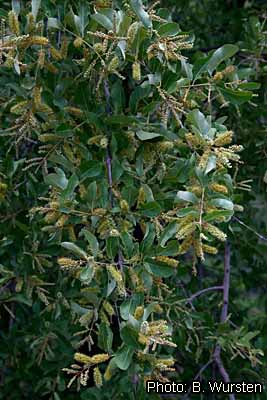 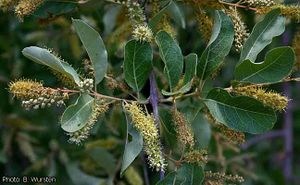 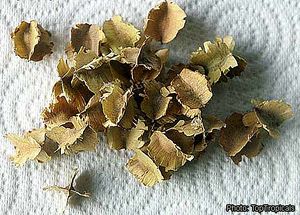 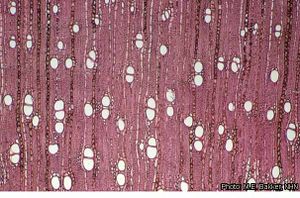 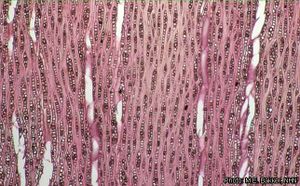 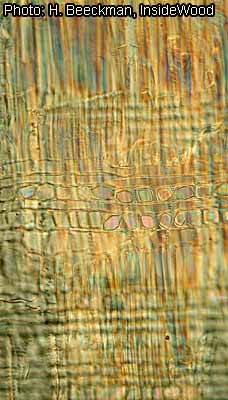 The wood is used for fence poles, mine props, railway sleepers, mortars, walking sticks, inlay work, toys and turnery. Because of its durability, it is commonly used for the main supporting poles of huts. It is popular for sculpture and lathe work, whereas it is also used to make heavy, extremely durable furniture. The wood is favoured for use as firewood and for charcoal production; it burns slowly and with great heat. The ash from the wood has a high lime content, and is sometimes used as toothpaste and as a substitute of whitewash to decorate walls of houses.

Several plant parts are used in traditional medicine. Powdered roots or leaves and decoctions from roots and leaves are taken to treat diarrhoea. On the other hand, a leaf decoction is applied as an enema to treat constipation. A root infusion is drunk to treat schistosomiasis. Bark powder is applied externally against leprosy. Tea made from the roots or leaves is drunk to treat coughs and colds, and the smoke of burnt leaves is inhaled for the same purposes. A leaf decoction is drunk to relieve chest pain. A root maceration is taken to treat stomach-ache. The roots are used to treat infertility in women. The tree yields an edible gum. The bark has been used for tanning leather. The foliage is eaten by livestock, although it reportedly contains only 4% protein. The tree is claimed to have protective power, and several plant parts are used in ritual ceremonies. Combretum imberbe is useful as an ornamental shade tree.

In southern Africa Combretum imberbe is in high demand in the carving industry, together with Berchemia spp., Olea europaea L. subsp. cuspidata (Wall. ex G.Don) Cif. and Spirostachys africana Sond. In Mozambique the wood is classified as first class for carving. In Tanzania it has replaced the wood of Bobgunnia madagascariensis (Desv.) J.H.Kirkbr. & Wiersema. In 2003 the official harvest was 3900 m³ of logs, but then a nation-wide ban on the harvest was declared.

The heartwood is dark brown and distinctly demarcated from the thin, yellow-brown sapwood. The grain is straight, texture fine. The wood is very heavy, with a density of about 1200 kg/m³ at 12% moisture content. It is difficult to work, rapidly blunting cutting edges, but it takes a very nice lustrous polish. The turning properties are excellent. The wood is very durable, even in contact with the ground.

Acetone and ethyl acetate extracts of the leaves of Combretum imberbe showed pronounced anti-inflammatory activity in the cyclooxygenase-1 bioassay, whereas an aqueous extract showed activity against Schistosoma haematobium. The pentacyclic triterpene imberbic acid has been isolated from the leaves; this compound showed potent antibacterial activity against Mycobacterium fortuitum and Staphylococcus aureus. Another pentacyclic triterpene isolated from the leaves, 1α,23-dihydroxy-12-oleanen-29-oic acid-3β-O-2,4-di-acetyl-L-rhamnopyranoside, showed strong antibacterial activity against Staphylococcus aureus and Escherichia coli, as well as strong inhibition of 3α-hydroxysteroid dehydrogenase and moderate cytotoxic activity against some human cancer cell lines. In tests the wood ash showed good results in managing cowpea weevils in stored cowpea seeds.

In South Africa the wood of Combretum imberbe is commonly used to supplement the wood of Colophospermum mopane (Benth.) J.Léonard as the main constituent of palisade fences.

Combretum is a very large genus, comprising about 250 species and distributed worldwide in the tropics and subtropics. About 140 species occur in tropical Africa.

Combretum imberbe trees grow very slowly. Under natural conditions, mean annual diameter increment rates of only 0.3 mm to 2 mm have been recorded, but under optimal conditions in cultivation young trees may reach 6 m tall in 15 years. Combretum imberbe flowers from November to March, and fruits ripen from February to August. The fruits are dispersed by wind, up to a distance of 50 m from the parent tree.

Combretum imberbe trees can become very old. Radiocarbon dating showed that some specimens were over 1000 years old. Dead trees can remain upright for as much as 80 years.

Combretum imberbe occurs in open woodland and wooded savanna, on a wide variety of soils from sandy soils to limestone outcrops, also on alluvial soils and black cotton soils, but only occasionally on heavy clay soils, from sea-level up to 1000 m altitude. It is most common along rivers. Combretum imberbe has an important ecological value for animal species, e.g. as fodder for desert elephants in Namibia and as nesting site for Ruppell’s parrot and hornbills.

One kg contains about 11,500 fruits, with the seed accounting for about 45% of the fruit weight. Seeds should be sown while still fresh. They should be soaked in water for a few hours before being pressed into seedling trays filled with river sand. After they have been covered with a thin layer of sand, the seeds should be kept moist. They germinate in 1–2 weeks, but very low germination rates have been recorded (3–5%), as well as high mortality among seedlings. The seedlings can be transplanted into nursery bags after development of the second leaf.

The trees can be managed by coppicing. The number of shoots produced from cut stems is negatively correlated with the height at which the trees are cut, but shorter shoots are produced when the tree is cut close to the ground. A cutting height of 1 m appears most advantageous. In South Africa the majority (nearly 80%) of the Combretum imberbe trees has bole diameters of less than 20 cm. In Tanzania the minimum diameter limit for harvesting has been fixed at 24 cm.

Seeds seem to be liable to attacks by insects and rodents. Seedlings are apparently often destroyed by large herbivores such as antelopes and elephants.

Good equipment with hardened and sharp cutting edges is needed to fell the trees and to saw and work the wood.

Combretum imberbe is widespread and at least locally common. It is therefore not easily liable to genetic erosion. However, studies in Malawi have shown that the wood is in high demand for charcoal production, and that many trees are felled for this purpose. In South Africa Combretum imberbe trees of over 20 cm in bole diameter are selectively felled on a large scale for their timber, whereas smaller-sized trees are commonly cut for firewood. The extent of exploitation appears to be unsustainable in many regions with high human population pressure within the distribution area of the species.

There is a lack of knowledge on natural regeneration of Combretum imberbe and on threats to young trees, and the response of Combretum imberbe to harvesting pressure under different environmental and anthropogenic influences is poorly understood. Research on these aspects is needed to develop models for sustainable exploitation. Protection of this slow-growing tree is becoming important, but is certainly worthwhile considering its many services to humans and animals.