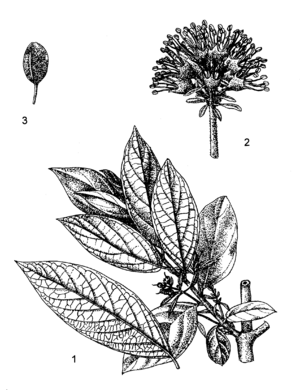 Throughout southern Africa root bark and stem bark decoctions are taken as a strong purgative and to treat cough, infertility, leprosy and venereal diseases. They are also taken as an anti-abortifacient and aphrodisiac. A leaf infusion is taken to treat abdominal pain. In Zimbabwe root powder is inserted into the vaginal canal to contract it during intercourse. It is a dangerous practice and fatalities have been reported. The Zulu give small doses of the root to their dogs as a fattening tonic. Dried and powdered gum is applied to sores. The fruit is poisonous, producing persistent hiccup; it is sometimes chewed as an anthelmintic.

The bark gum is non-toxic, elastic, and produces a non-cracking varnish. The gum was once used in tanneries as a substitute for gum from Astragalus spp. A dark, rich brown dye is extracted from the roots which is used for tanning hides. The wood is yellow, tough and easily worked, but not durable. It is used for making cattle troughs and grain mortars, household utensils and ornaments. It is also widely used as firewood.

Combretum erythrophyllum is planted as an ornamental and shade tree. Dried fruits are used for decoration purposes.

In South Africa and the United States Combretum erythrophyllum is sold as an ornamental tree.

The stilbenes exhibited cytotoxic effects against cancer cell lines and inhibited the growth of a DNA-repair deficient strain of Saccharomyces cerevisiae. All flavonoids showed good activity against Vibrio cholerae and Enterococcus faecalis, with MIC values in the range of 25–50 μg/ml. Rhamnocitrin and quercetin-5,3’-dimethylether also inhibited Micrococcus luteus and Shigella sonei at 25 μg/ml. With the exception of 5-hydroxy-7,4’-dimethoxy-flavone the flavonoids were not toxic towards human lymphocytes. This compound was potentially toxic to human cells and exhibited the poorest antioxidant activity. Combretastatin A-1 phosphate has been evaluated as a prodrug causing rapid vascular shutdown within tumors. Combretastatin A-1 phosphate is more potent against a well-vascularised murine colon tumour than its predecessor, combretastatin A-4 phosphate, and may have potential for clinical development. Rhamnocitrin and rhamnazin exhibited strong antioxidant activity.

The wood has coarse and rather featureless grains. There is no real distinction between sapwood and heartwood. The wood is yellow, tough and moderately heavy (air-dry: 670 kg/m³).

The gum of Combretum erythrophyllum is sometimes used as adulterant of gum arabic from Acacia senegal (L.) Willd.

Combretum is a very large genus, comprising about 250 species and distributed worldwide in the tropics and subtropics. About 140 species occur in tropical Africa; c. 20 species are endemic to Madagascar.

Combretum erythrophyllum is very similar to Combretum caffrum (Eckl. & Zeyh.) Kuntze, ‘Cape bush-willow’, which only occurs in eastern South Africa, and which prefers a similar habitat.

Combretum erythrophyllum occurs in dry woodland and savanna, especially on river banks, occasionally on copper bearing soils, from sea-level up to 1500 m altitude. It can tolerate a variety of soils, including heavy black loam, sandy riverine alluvium and granite sand. It is rather drought and frost tolerant.

Combretum erythrophyllum is propagated by seed. Average seed weight is 42.7 g/1000 seeds. Removal of the fruit coat and scarification with hot water improved germination rate and uniformity of germination. Hot water treatment improved germination rate of both the seeds and the fruits, better than stratification and soaking in water. Fresh seeds are sown in seedling trays filled with a mixture of river sand and humus-rich soil; the seeds are covered with a thin layer of sand. Seeds germinate within 7–16 days, with a germination rate of 70–90%. Seedlings are transplanted into black nursery bags at the 2-leaf stage and at 30–50 cm they can be transplanted into the field. They grow best in deep, well-drained soil with ample water, and they must be protected from frost for the first 2–3 winters.

Combretum erythrophyllum sets lots of seed and seedlings are often to be found under the trees. About 15% of the seeds is parasitized.

Wasps lay eggs in the seeds, which are eaten by newly hatched larvae. Combretum erythrophyllum may be subject to die-back of small stems due to stalk-boring insects. Older trees are often attacked by trunk rot (Polyporus spp.).

Combretum erythrophyllum is widespread in it distribution area, regenerates well and is therefore not in danger of genetic erosion.

Combretum erythrophyllum shows interesting antimicrobial, antiplasmodial and anti-inflammatory activities, and also contains the promising anti-tumor compound combretastatin A-1 phosphate. Further research to establish the safety profiles of its extracts and compounds is warranted. It also has potential as an ornamental plant.