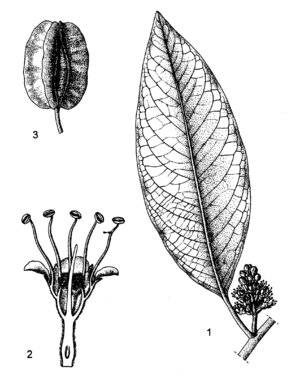 Combretum collinum is widespread in the dry savanna of tropical Africa, and occurs from Senegal to East Africa and south throughout southern Africa to north-eastern South Africa.

Combretum collinum has a large number of uses in Africa, and especially in traditional medicine. A fresh or dried leaf infusion and root decoction is widely taken as a cholagogue, diuretic and purgative and also to treat gastro-intestinal problems, including diarrhoea, dysentery, stomach-ache and ascariasis. A leaf and leafy twig decoction is drunk and fresh roots are chewed to treat lung problems including coughs, bronchitis and tuberculosis and also to treat snakebites and jaundice. The juice from the roots is further externally applied to snakebite wounds, syphilitic sores and toothache. A root maceration or decoction is taken to treat gonorrhoea, female sterility and pyomyositis. A root decoction, together with roots and bark of Kigelia africana (Lam.) Benth., is taken for the treatment of excessive menstrual bleeding beyond the normal time. Furthermore, a root infusion is given to delivering women to enhance labour and to epileptic patients. Root powder in petroleum jelly is applied topically in the treatment of epilepsy. Bark powder is eaten in porridge to treat rectal prolapse and haemorrhoids. A twig bark and root decoction is drunk to treat pain in the side and headache. Leaf sap is applied to wounds, ulcers and leprosy and also used as ear drops to treat earache. Crushed leaves are applied as poultice and used for bathing to treat fatigue and rheumatism. A leaf and root infusion is taken as a blood tonic.

Leaves, stem bark and roots are often used alone or in mixtures with other plants to treat fever, malaria and appendicitis. The gum exuded from injured branches is edible and used to cure toothache or to plug a tooth with caries. Seed powder is applied to eye infections in cattle.

The wood of Combretum collinum is fairly hard and durable and rather termite resistant but prone to rot in the ground. It is popular for fencing poles, canoes and tool handles and has been used for wagon building. The wood is a good source of firewood and makes very good charcoal. Combretum collinum can be planted as an ornamental for shade or shelter. It can be planted as a firebreak, as the tree is tolerant of grass fires. Flowers produce good nectar for honey. The leaves are widely browsed by sheep, goats and cattle, although in some regions cattle does not like it.

In Nigeria unidentified parts have been used as famine food. The roots provide a fiber used in basket work. In Uganda the wood is used for fermenting local beer. In South Africa, the winged fruits can be strung together to make attractive room-dividers or spray-painted as Christmas decorations.

Parts of Combretum collinum are sold at local markets for medicinal use. In South Africa the winged fruits are locally commercialized for ornamental purposes.

Few phytochemical and pharmacological analyses have been done on Combretum collinum. The stilbenoids combretastatins A and B and several phenanthrenes have been isolated from the aerial parts. The triterpenoid components of the leaves and fruits of 3 southern African subspecies of Combretum collinum yielded varying amounts of 4 cycloartane acids. None of these compounds appeared to be responsible for the toxic properties of the fruits. From the gum exudate a range of amino acids has been isolated, with aspartic acid, glycine, glutamic acid and alanine as the most important ones.

Combretum collinum has whitish-brown sapwood, which is not clearly differentiated from the pale brown heartwood. The wood has an interlocked grain and a course texture.

Combretum is a very large genus, comprising about 250 species and distributed worldwide in the tropics and subtropics. About 140 species occur in tropical Africa; c. 20 species are endemic to Madagascar.

Combretum collinum is a highly variable species and at least 11 subspecies have been distinguished, differing from each other only in minor characters.

In West Africa it flowers during the second half of the dry season or the beginning of the rainy season. In southern Africa it flowers in August to October with the previous season’s leaves still present and fruiting occurs from January to August. Old fruits may be found on the tree for most of the year. Fruiting can be sparse or prodigious.

Combretum collinum occurs in arid, semi-arid and tree savanna, as well as in deciduous and evergreen thickets and on termite mounds, from sea-level up to 2200 m altitude.

It grows in a variety of soils, in semi-arid to medium rainfall conditions. It is drought and frost tolerant when mature.

Combretum collinum is propagated by seedlings and wildlings. Seeds storage behaviour is orthodox. The seeds retain their viability for several months if kept dry and free from insects, at a maximum temperature of 20ºC. For best germination, pre-sowing treatments such as fruit scarification or soaking should be done. The pretreated fruits do not store well and should be sown immediately. Seeds can also be extracted from the fruit, but removal of the seed is not easy, and soaking of the fruit in cold water before opening facilitates the process. The seeds should be soaked for a few hours in water before being sown in a mixture of river sand and compost. Seedlings may appear after 8–20(–35) days, and the germination rate varies from 0 to 90%. After 5–6 weeks the first leaves appear, and the seedlings are vulnerable to fungal attack in humid conditions; 55–80% survives the seedling stage. The seedlings can be transplanted into growing containers once they reach the 2-leaf stage. Growth is rapid, at least 50 cm per year. Natural germination is hampered by bush fires and dry spells.

Combretum collinum can be pollarded, coppiced, trimmed and pruned. Young plants are vulnerable to cold wind and frost. In cultivation, it prefers a humus-rich soil and partial shade. Over-watering results in poor flowering.

Combretum collinum has a higher incidence of coppicing than other Combretum spp. because of its good fuel wood properties. It sprouts quickly after cutting and fire.

The leaves, stems, bark and roots of Combretum collinum are harvested from the wild or from home gardens, whenever the need arises. Removal of the bark should be done in small pieces and not by ring barking, as is commonly done. Harvesting the roots is even more destructive.

The harvested bark, leaves, stems and roots are washed and air-dried before use or trade. For long-term storage (up to 6 months), the plant parts are sun-dried and stored in airtight containers. A decoction of the leaves, root, stem or bark can be stored in bottles to be used within a week. If refrigerated, it can be stored for much longer.

Combretum collinum is widespread in most of its area of distribution and is not in danger of genetic erosion. In regions where population pressure is high, it is overexploited for firewood and is frequently cut down on agricultural land. In Uganda and South Africa excessive cutting of Combretum collinum has been reported and this calls for measures to protect some of its natural stands. Combretum collinum subsp. suluense (Engl. & Diels) Okafor is listed as ‘low risk but least concern’ on the IUCN Red List in KwaZulu-Natal and neighboring regions of South Africa. However, no systematic germplasm collections exist; however, there are small collections in botanical gardens, private gardens and research institutions in Kenya, Uganda, Tanzania, Zimbabwe and South Africa.

Combretum collinum is widespread and commonly used in traditional medicine. In view of these uses, surprisingly few phytochemical and pharmacological analyses have been carried out, and further research to identify bioactive compounds need to be carried out to corroborate the medicinal properties. Research on propagation and domestication as well as quality control and measures for sustainable utilization are needed.