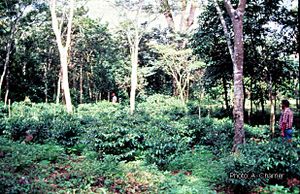 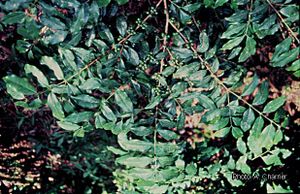 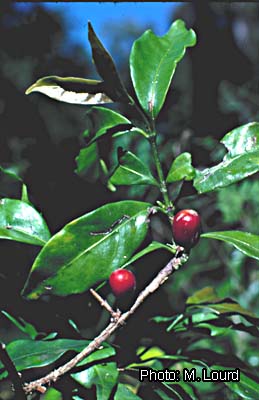 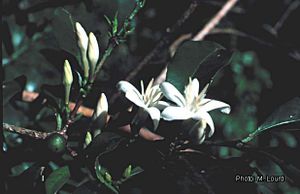 Coffea eugenioides is native to the highlands of East Africa, where it occurs in the eastern part of the Democratic Republic of Congo, Rwanda, Uganda, Kenya and western Tanzania.

Uses Beans of Coffea eugenioides have a very low caffeine content and coffee made from them tastes mild and agreeable. Coffea eugenioides plays a role in breeding work of Coffea arabica L. and Coffea canephora A.Froehner, especially in broadening the genetic base and lowering the caffeine content. East African people have a long tradition of using the fruit of Coffea arabica and Coffea canephora, both from wild and cultivated plants, but they have never used that of Coffea eugenioides. Wild plants of the latter, which seemed outstanding in vigour and bean-size, produced progeny with low yields and of no economic value in cultivation.

Per 100 g dry matter, the seed of Coffea eugenioides contains only 0.3–0.6 g caffeine (compared with 0.6–1.7 g for Coffea arabica, and 1.5–3.3 g for Coffea canephora), making it an interesting parent in breeding work for low-caffeine coffee.

More than 100 Coffea species have been described, mainly from Africa. All species studied are diploid (2n = 22), except for the allotetraploid species Coffea arabica (2n = 44). Phylogenetic relationships of Coffea species inferred from chloroplast DNA variation and nuclear ribosomal DNA units confirmed a monophyletic origin of Coffea, with major groups presenting a strong geographical correspondence (West Africa, Central Africa, East Africa and Madagascar). Recent investigations by means of molecular markers, gene sequencing and genomic in situ hybridization support the hypothesis of an allotetraploid origin of 'Coffea arabica' involving Coffea eugenioides as maternal progenitor and Coffea canephora as paternal progenitor. Other genomic in situ hybridization studies, however, indicate the closely related Coffea congensis A.Froehner as the paternal progenitor. Coffea eugenioides belongs to the so-called ‘arabica-congensis’ complex, together with 'Coffea arabica' L., Coffea congensis A.Froehner and Coffea kivuensis Lebrun. The species of this complex are closely related, which could be a consequence of very recent speciation processes. They are difficult to distinguish morphologically, and it is not possible to reliably differentiate the species on the basis of flowering specimens only. However, fruiting specimens can be identified confidently in almost every case. A study of the variation in morphology of the complex showed that Coffea kivuensis is best treated as a species distinct from Coffea eugenioides and not as it has been more commonly known as, a variety of the latter species. It can be distinguished by its larger, obovoid fruits with acute bases and without a longitudinal groove. Coffea kivuensis seems more closely related to Coffea congensis. The ‘arabica-congensis’ complex seems to consist of 2 groups of vicariant species: one group comprising 'Coffea arabica' and Coffea eugenioides, and the second Coffea congensis and Coffea kivuensis.

Coffea eugenioides is a common understorey species found in the form of a shrub, usually 2–3 m in height, with more than one main stem. When growing under shade in natural forest, it resembles a miniature 'Coffea arabica': the leaves are similar, but they are smaller and thinner; the flowers also resemble those of 'Coffea arabica', but they are smaller and there are seldom more than 2 or 3 in a cluster. The fruits are not abundant and contain very small beans. When Coffea eugenioides is growing in the open (e.g. in living collections) it becomes a compact conical shrub or small tree, with small leaves.

Coffea eugenioides is found both in large forests and in small relict forests in the highlands, between 1500 and 2200 m altitude, but penetrates slightly into the lowlands in the Democratic Republic of Congo (Kivu region) and the lowland forests of the Lake Victoria belt. It appears to be tolerant of a wide range of soils and to temporary drought conditions. In some localities in Uganda (Minziro forest, Budongo forest) Coffea eugenioides and Coffea canephora grow in close proximity, but differ in habitats: the former is restricted to the hillside forests or the drier eastern sides of the forests and grows near forest edges, while the latter is more abundant inside the forests, in hollows that are sometimes waterlogged or in the wetter western sides of the forests.

The two major diseases of coffee, leaf rust (Hemileia vastatrix) and coffee berry disease (Colletotrichum kahawae) have been observed on Coffea eugenioides in natural forests in Kenya. Mites and leaf miners are common on plants in rain forest and are considered pests of secondary importance. Some tolerance is reported to a number of nematodes, leaf miner (Leucoptera coffeella) and leaf rust.

Surveys of genetic erosion in wild coffee made by IBPGR in the Kenyan forest understorey revealed that 2 of 13 wild coffee sites had disappeared and only 2 out of 13 sites were secure in a national park. The other sites were highly threatened and required further monitoring to assure valuable in situ conservation.

In the 1970s, two field gene banks of 23 taxa were established in Côte d’Ivoire for ex situ conservation of the diploid African coffee species. Coffea eugenioides germplasm is represented by about 1000 accessions originating from 6 wild coffee populations in Kenya. One of these collections is located at 1100 m altitude (at Man on Mount Tonkoui) in accordance with its ecological adaptation. Plants are grafted on to well-adapted rootstocks. A duplicate of this field collection is maintained at the Coffee Research Institute, Ruiru (Kenya). In other countries, a few samples of Coffea eugenioides are present in working collections.

Coffee seeds are not considered orthodox because they are not tolerant of dessication or low temperature. They cannot be used for long-term conservation. As an alternative approach, development of an in-vitro coffee core collection was initiated at ORSTOM (Montpellier) in the 1990s, representing 21 taxa; unfortunately, introduction of Coffea eugenioides was not successful.

Because of its low caffeine content of its beans and its good cup quality, Coffea eugenioides may gain some importance in breeding work on 'Coffea arabica' and Coffea canephora.