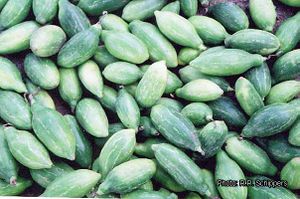 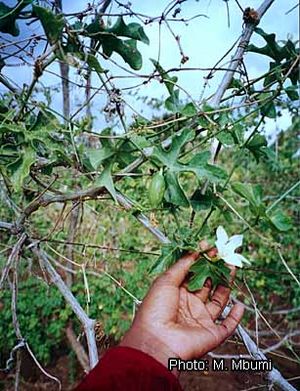 flowers and fruits are found at the axils

Coccinia grandis occurs wild from Senegal east to Somalia and south to Tanzania; also in Saudi Arabia, Yemen and India. It is locally naturalized in Mozambique and Mauritius and has been introduced in many other tropical and subtropical regions; it is considered an invasive, obnoxious weed in Australia, Florida and the Pacific Islands, e.g. Hawaii. It is cultivated in Asia from India to Indonesia. In East Africa, especially in Kenya, it is cultivated mainly for consumers of Indian origin.

Ripe red fruit of sweet-tasting cultivars are eaten raw, or they are peeled and cut into pieces and prepared as a stew with onions and tomatoes. Other vegetables may be added such as garden egg, bottle gourd, ridge gourd, okra and pulses. Meat is added when available. The dish may be served with bread, sorghum or any other starchy food. The dish is known in East Africa as ‘tindori’. Immature green fruits are prepared in soups and curries and widely used in this way in Ethiopia and India. Cultivars with bitter fruits are mainly used for their leaves and shoots. Such shoots are especially popular in Thailand where they are eaten as a fried or boiled vegetable. The leaves are also eaten as a vegetable by the Mursi people in Ethiopia. The seeds are chewed in Ethiopia and Kenya, but they are discarded in West Africa and Uganda.

The fruits, stems and leaves have medicinal uses such as to reduce high blood pressure and to treat abscesses. Roots are believed to heal illnesses associated with endocrine system disorders such as diabetes mellitus, and are used in Niger to treat intestinal troubles. Bronchial inflammation, respiratory mucosae and skin disorders are also said to be healed by this plant. In some communities in India ivy gourd is cultivated as a medicinal plant. Goats, sheep, cattle, donkeys and camels eat the plant.

In Kenya ivy gourd is produced for the Asian community and also for export. The main production areas are Ukambani and Makuyu. There is a regular export from Kenya to London, but no data on volume are available. In most other countries in Africa ivy gourd fruits and leaves are mainly collected from the wild or occasionally grown in home gardens, e.g. near Kabale in Uganda.

Coccinia is placed in the tribe Benincaseae and comprises about 30 species, all of them confined to tropical Africa with the exception of Coccinia grandis.

Anchote (Coccinia abyssinica (Lam.) Cogn.) is cultivated mainly for its tuberous fleshy rootstock in Ethiopia, but its young shoots are eaten as a cooked vegetable.

In Malawi children may eat the fruits of Coccinia rehmannii Cogn., although they are said to cause sore eyes; the starchy tuber is eaten after roasting.

The leaves of Coccinia trilobata (Cogn.) C.Jeffrey are a famine food, occasionally used as a relish by some tribes in Kenya, e.g. in the Mbeere district. The fruits are said to be toxic.

Cuttings start developing new leaves and shoots after about one month. Suckers develop after another month, and flowering and fruiting start again one month later. Ivy gourd plants flower profusely and produce many fruits. Flowers only develop on the branches and not on the main stem. Young fruits can already be harvested about one week after flowering. The period from planting to the first harvest takes up to 5 months. Harvesting is best done weekly as long as there is enough moisture to produce new leaves and flowers. The crop could remain in the field for up to 10 years, after which the yields decline and farmers need to establish a new crop. However, replanting after 4 years may be more economical. In the wild, plants can become 20 years or older and the stems may become 30 m long with a diameter of up to 7 cm at the base. Stems become corky with age and both the rootstock and stems act as water reservoirs that enable the plant to survive the dry season.

Ivy gourd occurs naturally in semi-arid areas, in dry forest or wooded grassland, often in coastal regions, but in Uganda it can be found up to 2000 m altitude and in Ethiopia up to 2350 m. It also occurs in secondary vegetation in highland areas. It grows in a variety of soil types, most frequently on sandy soils.

Ivy gourd is propagated by means of stem cuttings 10–15 cm long and about 0.5 cm in diameter. Farmers prepare planting holes of 30 cm deep and 60 cm in diameter. Up to 20 kg farmyard manure is added and mixed with soil and water. The cuttings are placed upright or at a slight angle to promote the development of side shoots. When planting is done during a dry spell, farmers should apply enough water and continue watering regularly. Plant spacing is approximately 1 m between plant holes and 1.2–1.6 m between rows. This wide spacing is needed for the long stems, which can reach a length of 10 m or more and require trellising. In home gardens they may be trained over fences or roofs. The wide spacing provides easy access for weeding, pest control and harvesting.

Propagation by seed is little practised because of the dioecious nature of ivy gourd giving 50% non-productive male plants. A ratio of 1 male to 10 female plants is considered adequate for pollination.

Ivy gourd may be intercropped with maize or other short-duration crops during its early stages. When the cuttings start growing, irrigation should take place once every 2 days until plants become stronger and irrigation twice weekly becomes adequate. The long stems are trained along a system of vertical and horizontal wires attached to wooden poles.

The first side-dressing is applied about 4–6 weeks after planting when the first new leaves and shoots start to develop. For every plant farmers need to apply up to 500 g of a N-fertilizer, e.g. calcium nitrate. Once the first fruits have been harvested, plants require additional fertilization, e.g. with di-ammonium phosphate, which needs to be applied monthly.

Weeding is done either with a machete or by hand as hoeing might damage the roots. In an established crop irrigation is required from the onset of the dry season to prolong the harvesting season; however, some farmers prefer to give the plants a rest period and wait for the new rains to come. The leaves will dry out during the dry season and need to be removed to make room for new shoots. This is often done by beating the plant, forcing the leaves to drop. Regular pruning is required to stimulate new growth. Older branches dry out and become corky and will no longer produce leaves and flowers. During the dry season when the soil becomes hot, a mulch application is recommended to avoid scorching.

In countries where ivy gourd has been introduced and where no natural predators exist, it can become a serious weed. It grows fast, quickly covering the ground and smothering shrubs and trees in a dense blanket. Control is laborious; uprooting the whole plant is difficult because remaining pieces of the rootstock will regenerate again. This is why landowners in Australia with this plant on their property are obliged by law to destroy it.

Ivy gourd is host to a range of diseases including powdery mildew (Sphaerotheca fuliginea, Erysiphe cichoracearum). Seed-borne anthracnose (Colletotrichum lagenarium) may cause heavy losses of fruit especially in storage; it can be controlled by spraying with copper oxychloride. Other diseases include black rot (Curvularia pallescens) and stem rot (Rhizoctonia solani). Viral diseases, such as watermelon mosaic virus (WMV), may affect the plant. The symptoms include mottling, green blisters, curled leaf margins and distortion of fruit.

A major pest in cultivated crops in Kenya is caused by coreid bugs that feed on new shoots and young fruits. When sucking fruits, they cause distortion of fruits or fruit shedding, whereas a heavy infestation can cause dieback of the shoots. The pumpkin caterpillar (Diaphania indica) can be a serious pest on ivy gourd. Aphids (Myzus persicae, Aphis gossypii) feed on the flowers and affect the development of new fruit. Fruit flies can also be a serious pest. Pesticides should only be applied when needed because they might also kill beneficial insects. Other pests found in Kenya are a weevil (Acythopeus cocciniae) and clearwing moth (Melittia oedipus) of which the larvae are stem borers that cause the stems to collapse. These two natural enemies are now used as biological control in areas where ivy gourd is a noxious weed.

Individual plant yields are in the order of 7–10 kg of immature fruits per year; per ha 10–13 t/year may be harvested. Peak production is between the second and fourth year, after which the production declines unless the crop is regularly fertilized, irrigated and pruned. There are no data on yields of leaves.

The fruits are spread out during the evening in a single or double layer on top of clean sacks. When they are covered or kept inside a sack, they tend to turn yellow outside and pink to reddish inside. Only fresh green fruits which are whitish to pale green inside can be sold. Traders use cold rooms to keep them fresh. When stored in a refrigerator, the fruits last for up to two weeks. Prior to taking the fruits to the market, they are placed in cartons, each containing about 7.5 kg. These cartons are also used for exporting the fruit.

Coccinia grandis is only sparsely represented in the germplasm collections of some Indian research institutes. Selection work in India has resulted in several attractive sweet-tasting cultivars. There are no institutes in Africa where germplasm is being maintained. However, a wide diversity exists in the wild throughout its natural range.

Breeders may look for compact plants with short internodes. Parthenocarpy whereby female flowers develop into a fruit without pollination occurs. It appears that the cultivated crop in East Africa is parthenocarpic, whereas in East Asia male plants are needed for fruit set.

The demand for ivy gourd from local people is limited and could be met from wild populations, whereas production for the Asian community is likely to remain at the current low level. More research is needed to assess the potential of ivy gourd as a cultivated vegetable for African consumers or as a medicinal plant.