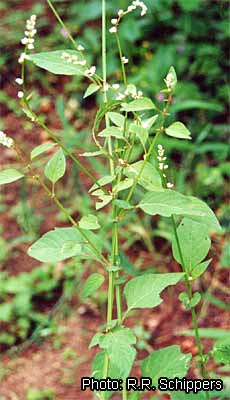 Celosia trigyna leaves are consumed as a vegetable, finely cut in soups, stews and sauces. The slightly bitter leaves are popular amongst the Yoruba people in south-western Nigeria, where the plant is known as ‘aje fo wo’.

The plant is used in traditional medicine. In Sierra Leone it is used for the treatment of heart complaints, whereas in northern Nigeria it is used to treat pustular skin eruption. In Ghana it is applied to sores and boils. Pulped leaves are used to treat costal pains, chest troubles, stomach-ache and urethral disorders. The plant is included in several medicinal preparations used to treat women’s disorders and diseases, including ovarian troubles in DR Congo and excessive menstruation in Ethiopia. The leaves and flowers are used to treat diarrhoea. The plant is eaten by livestock, but reports on its acceptability are contradictory.

Celosia trigyna is a minor vegetable sold in local and city markets. Production data are not available.

Celosia comprises about 50 species and occurs in all tropical and subtropical regions. Celosia trigyna is probably the most widespread species in tropical Africa. It differs from many other Celosia species in its chromosome number, being diploid, and is considered to have an isolated position within the genus.

Some other species are often confused with Celosia trigyna and these are probably used as a vegetable as well: Celosia globosa Schinz (found from Nigeria to Uganda), Celosia isertii C.C.Towns. (throughout tropical Africa except the north-eastern part), Celosia leptostachya Benth. (Sierra Leone to DR Congo) and Celosia pseudovirgata Schinz (Nigeria to DR Congo).

Seed germinates 4–5 days after sowing. The growing period is 90–120 days from planting to seed maturity. The flowers are pollinated by insects.

Celosia trigyna occurs in forest clearings and grassland, along roadsides and rivers, and as a weed in fields, up to 1500(–2000) m altitude. It requires up to 2500 mm annual rainfall and maximum temperatures of 25–30°C for optimum growth, and does not tolerate temperatures below 15°C. It grows on a wide range of soils, but prefers fertile well-drained loamy soils.

Celosia trigyna is propagated by seed, which is either broadcast or drilled directly on plant beds. The seeds are small, the 1000-seed weight being about 0.3 g. A seed rate of 8 kg/ha is recorded as adequate. Before sowing, the seed is mixed with sand or finely sieved soil to achieve a uniform spread and good plant establishment. Broadcasting the seed is preferred for leaf production. Plants are thinned to a spacing of about 15 cm; they become very bushy with overhanging branches at wider spacings. Drilling in rows spaced 0.8–1.0 m apart is more suitable for seed production.

Celosia trigyna requires fertile soils for proper growth. In poor or moderately fertile soil, incorporation of organic manure at a rate of 20–25 t/ha before planting is recommended. As an alternative, application of NPK (20–10–10) at 300–400 kg/ha is suitable for a single harvest by uprooting, whereas in case of repeated cutting a higher dose of 500–700 kg/ha can be applied. Weeding is essential at the early seedling stage and regular watering is required during dry periods.

Celosia trigyna often becomes weedy in other crops. It can be controlled fairly easily both mechanically and with herbicides.

Disease incidence is not common in Celosia trigyna and no records of serious diseases are available. Pests recorded include millipedes and the adults and larvae of the tortoise beetle (Cassida tosta), which feed on the leaves. In south-western Nigeria, a few destructive insects have been recorded on the plant. Adults of Gasteroclisus rhomboidalis attack the stem, and the leaves are attacked by adults of Anacatantops notatus. The larvae of Sceliodes laisalis and Hymenia recurvalis are destructive to the leaves.

Celosia trigyna can be harvested either by uprooting of young and vigorous seedlings or by repeated cutting. The first leaf harvest is about 8 weeks after sowing and up to 8 pickings of young shoots are possible in a period of 2 months before flowering reduces growth. Cutting of side branches and stems at 5 cm above soil level encourages branching.

Weekly harvest for a period of up to 2 months can yield about 4–5 t/ha of fresh vegetable.

Fresh leaves are used for home consumption or marketing directly after the harvest or dried for later use. Fresh stem and branches are tied into small bundles before they are taken to the markets for sale.

Diversity within Celosia trigyna is considerable, but there is no information on attempts to collect, conserve and characterize the diversity. Improved cultivars are not available. There is no threat of genetic erosion in wild populations because Celosia trigyna is widespread and common in disturbed habitats.

Celosia trigyna is currently of little importance as a leafy vegetable in comparison with Celosia argentea, but availability of genetically improved types and suitable agronomic practices could rapidly increase the production as a tasty leafy vegetable.