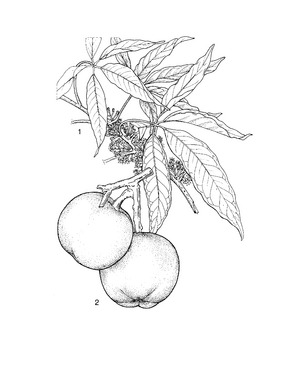 Casimiroa is native to the highlands of Mexico and Central America (up to elevations of 3000 m) and as far south as Costa Rica. The tree does not grow in the hot lowlands (below 600 m elevation) in Central America. Small orchards have been planted in California, Florida and Hawaii, Australia and New Zealand. In South-East Asia the tree is only sporadically found, mainly in the drier parts of the region.

Casimiroa fruit is usually eaten fresh. However, the pulp can be used as a flavouring for dairy products such as milkshakes and ice-cream. The pulp of the ripe fruit is smooth and creamy with a distinct sweet flavour that may be marred by traces of bitterness, particularly near the skin. The bark, leaves and seed contain casimirosine, a glucoside, which is used to lower blood pressure and in larger amounts as a sedative and also to soothe rheumatic pains. In home gardens the tree is also appreciated as an ornamental.

Casimiroas are highly nutritious, being rich in vitamins A and C as well as carbohydrate and protein. Sugar content can be as high as 27%.

The trees produce 2-3 flushes of shoot growth per year; leaves are shed mainly during the cool dry season when the trees are quiescent. In the subtropics flowering occurs from late autumn to early summer depending on the cultivar but a few everbearing cultivars, e.g. "Lemon Gold", produce up to 5 lesser flowering cycles during the remainder of the year. In the tropics the dry season leads to flowering; branch cincturing brings on out-of-season bloom. Most cultivars produce only functionally female flowers due to the absence of pollen in the stamens. These cultivars ("Reinikie Commercial", "Golden Globe", "Blumenthal", "Yellow") require cross-pollination. Two cultivars, "Ortego" and "Vernon", which produce abundant quantities of pollen and which flower over an extended period of time, may prove useful as pollinators.

The casimiroa is distinctly subtropical in its climatic requirements, surviving light frosts. On the other hand, flowering during the coldest months tends to result in poor fruit set. Casimiroa trees are capable of growing on a wide range of soil types from sands to clay loams. They can be grown on shallow soils provided the rows are mounded to reduce waterlogging.

Seed (air-dried) should be sown within 3 weeks or ultimately within 2 months of harvesting the fruit, since viability declines rapidly. Germination takes about 3 weeks. Usually seedlings of C. edulis are budded or grafted with the required cultivar, but seedlings are so variable that propagation through rooting of cuttings (very difficult) or air layering deserves consideration.

Spacing is 8 m × 4 m or 7 m × 5 m, eventually to be thinned to 8 m × 8 m or 7 m × 10 m. Regular (4-6 times per year) light pruning is required for the more vigorous types during the first two years to obtain adequate branching without delaying fruiting too much. Limbs forming narrow crotch angles should be removed early. Nutrient requirements have not been studied, but in view of the heavy yields guidelines for citrus may be followed.

The most important pests are fruit fly, fruit spotting bug, soft brown scale and mealy bug. The latter two bring sooty mould in their wake; anthracnose of blemished fruit is another disease. The trees do not appear to be susceptible to Phytophthora cinnamomi root disease.

Casimiroa is considered to be one of the most productive fruit trees. With some cultivars fruit maturity is easy to judge by fruit colour, turning from green to yellow; if there is no colour change, it is suggested that harvesting should start only when sugar or Brix levels exceed 16°and when a sample of the fruit ripens fully. Fruit can be stored for 3-6 weeks at 5°C, but its shelf life of a few days only at ambient temperature is a severe handicap for the commercialization of many cultivars.

Sixty cultivars are under assessment in Australia and New Zealand; selection and breeding aim at fruit that is less easily bruised and has a longer post-harvest shelf life.

Prospects for future development of this fruit are good as trees are high yielding from an early age and the fruit is acceptable for both dessert and processing purposes. Within South-East Asia casimiroa will remain restricted to the drier highland areas; commercial production is a possibility provided that adapted cultivars with desirable fruit characteristics are grown.