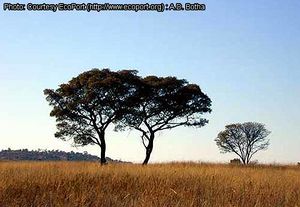 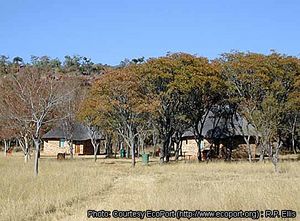 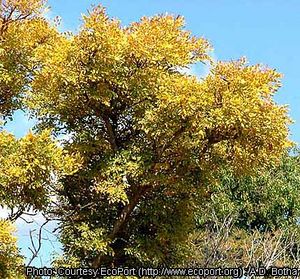 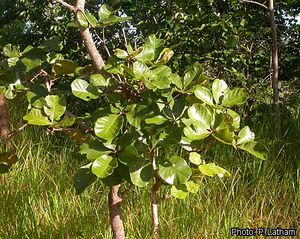 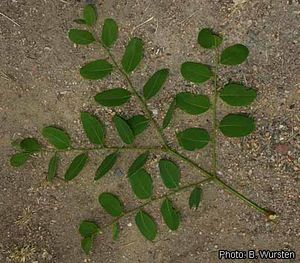 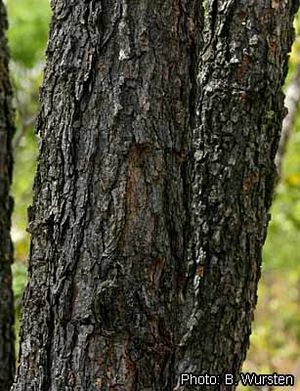 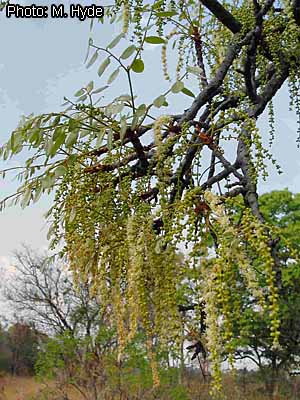 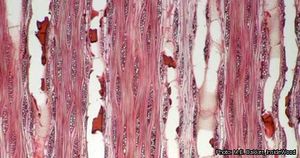 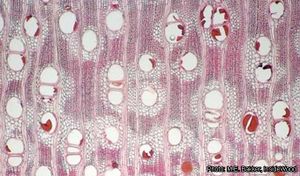 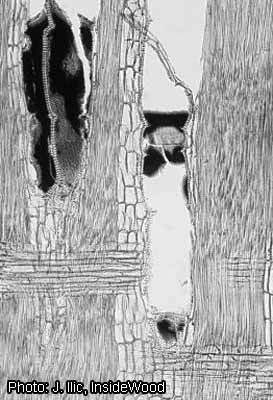 Burkea africana is widespread, occurring from Senegal east to Sudan and Uganda, and south to Namibia, Botswana, Mozambique and northern South Africa.

The wood is used for poles (e.g. for heavy construction and fences), parquet flooring, furniture, railway sleepers, utensils such as mortars, tool handles, drums and other musical instruments such as xylophones and balafons. It has been claimed by wagon makers that Burkea africana wood is the best for making hubs because it does not shrink or split. It is suitable for joinery, interior trim, ship building, mine props, sporting goods, toys, novelties, draining boards, carving and turnery. The wood is also used as firewood and for charcoal production, and has been used commonly for iron smelting because of the hot flame and little ash produced.

The bark, roots and leaves are commonly used in traditional medicine. Bark decoctions or infusions are used to treat fever, cough, catarrh, pneumonia, menorrhoea, headache, inflammation of tongue and gums, poisoning and skin diseases. Powdered bark is applied to ulcers and wounds, and to treat scabies. Root decoctions or infusions are used to treat stomach-ache, abscesses, oedema, epilepsy, bloody diarrhoea, gonorrhoea, syphilis and toothache. In Burkina Faso roots have been used as antidote against arrow poison. Leaves are used in the treatment of fever, headache, epilepsy, ascites and conjunctivitis. Twigs are used as chewing sticks. Pounded bark is used as a fish poison.

Young flowers are eaten in sauces. In Burkina Faso leaves are used as condiment. The bark and pods have been used for tanning leather. The bark is used as a dye to make the roots of Combretum zeyheri Sond. grey to blackish; these roots are woven into baskets in Namibia. The gum from the bark is edible; it is locally considered an aphrodisiac. Burkea africana is planted as a roadside tree and ornamental. It is host to caterpillars of Saturnid moths (Cirina forda and Rohaniella pygmaea), which are collected by people as food; after boiling and frying, these are considered a delicacy. The flowers produce nectar collected by honey bees.

The wood of Burkea africana is mainly used locally and traded in limited volume internationally. Production and trade statistics are not available. Bark and roots are commonly sold on local markets for medicinal purposes.

The heartwood is brown with grey and green tinges, turning reddish brown or dark brown upon exposure. It is usually distinctly demarcated from the yellowish or pinkish white, c. 2.5 cm wide sapwood. The grain is interlocked or wavy, texture fine to moderately fine and even. The wood is lustrous and displays a nice stripe figure.

The wood is heavy, with a density of 735–1020 kg/m³ at 12% moisture content. It air dries moderately fast, with little tendency to corrugate, split or distort, but kiln drying should be done with great care. It takes about 3 weeks to kiln dry boards of 2.5 cm thick. The rates of shrinkage are moderate, from green to oven dry 2.9–5.6% radial and 4.2–9.2% tangential. Once dry, the wood is stable in service.

Although the wood is hard, it is not difficult to saw, but it is difficult to work with hand tools. The wood is susceptible to tearing in planing operations due to the presence of interlocked grain. It takes a nice polish upon finishing. Pre-boring in nailing is recommended because the wood is liable to splitting. The gluing properties are good. The wood turns well. It is durable, but the sapwood is susceptible to Lyctus attack. Extracts of the heartwood showed fungicidal and termiticidal properties, and this in combination with the strongly hydrophobic character of the wood and the high dimensional stability explains the good natural durability. The heartwood is extremely resistant to treatment with preservatives, the sapwood is more permeable.

Bark and leaves are reportedly toxic to livestock. The bark contains tannin and produces a semi-translucent yellowish to reddish gum. A hydroethanol extract of the bark showed pronounced antioxidant and radical scavenging activity, with proanthocyanidins as the most likely active constituents. Twigs showed antimicrobial activity against a wide variety of bacteria and fungi; this supports the use as chewing-stick for dental care.

The wood of Erythrophleum spp. and of Afzelia quanzensis Welw. resembles that of Burkea africana and is used for similar purposes.

Burkea comprises a single species. It seems related to the African genera Erythrophleum, Pachyelasma and Stachyothyrsus. When not flowering or fruiting, Burkea africana is often confused with Erythrophleum africanum (Welw. ex Benth.) Harms and Albizia antunesiana Harms, but it differs from both by its reddish brown velvety hairy young growing tips of twigs.

Rooting of Burkea africana trees is often superficial, and the roots can extend for many metres from the bole. Young trees reach sexual maturity when the bole diameter is about 12.5 cm. The inflorescences usually appear before the leaves, often at the end of the dry season. In southern Africa trees often flower in October–November and in West Africa in January–April. The flowers are pollinated by insects such as bees. It has been reported that trees fruit only once every two years. Fruits may remain for a long time on the tree, and are often still present after leaf fall.

Burkea africana occurs in deciduous woodland and wooded savanna, at 50–1750 m altitude. The annual rainfall in its area of distribution is 1000–1200 mm. It is usually found on light, well drained soils, often on loose, sandy or gravelly red soils, but sometimes also on rocky hills or on loam-clay soils. In South Africa Burkea africana is often associated with Terminalia sericea Burch. ex DC. and Ochna pulchra Hook.f., and in Namibia with Colophospermum mopane (Benth.) J.Léonard, Combretum imberbe Wawra and Pterocarpus angolensis DC. Trees with a bole diameter above 12.5 cm are fire resistant, being sufficiently protected by their bark.

Burkea africana has a reputation for being difficult to cultivate. Seeds may germinate in 10 days, but may also take 6 months to germinate, and the germination rate is often low. Experiments in Burkina Faso showed that mechanical scarification or exposure to sulphuric acid for 15–20 minutes resulted in a significantly higher germination rate of seeds. Seeds can be stored for a long time in a dry place, but they are susceptible to insect attacks. It has been reported that seedlings often die off in the seed tray or when transplanted. However, experiments showed that if the seedlings are transplanted into a well-drained, sandy soil with superphosphate, the rates of survival can be quite high. Seedlings should be given 70–80% shade and water once every week. Red sandy soil gives the best results. Cuttings produce leaves and shoots that often soon die off.

In many regions Burkea africana is common, locally abundant, but it usually occurs scattered and not gregarious. However, in southern Africa it can be dominant. Natural regeneration often occurs after fire. It has been noted that regeneration was good in natural stands in Namibia, both by seedlings and coppicing. The number of saplings per ha averaged 350.

A large proportion of the seeds is damaged by bruchid beetles. Porcupines have been recorded to damage trees seriously by scarring them, making them susceptible to fire damage. The foliage is consumed by caterpillars of several butterfly and moth species; Cirina forda has been classified as a pest.

A tree inventory in Namibia showed an average number of mature trees of 80 per ha and a mean wood volume of 16.5 m³/ha. However, the average yield of logs of good quality, i.e. 2 m long, straight and without defects, was only 0.05 m³/ha.

The centre of the bole is often defective. After harvesting for medicinal purposes, the bark is washed and air dried. When kept in airtight containers, it can be stored for 3–6 months. Bark decoctions are used immediately or stored in bottles for usage within one week.

Burkea africana is not under threat of genetic erosion because it is widespread and common over large areas. However, in many regions natural stands have declined as a result of clearing for agriculture, changes in climatic conditions and soil salinity, excessive burning and locally also growing elephant populations. Systematic germplasm collection and specific preservation programmes do not exist, but there are small collections in botanical gardens, private gardens and research institutes in Namibia, Zimbabwe and South Africa.

The bole is usually of small size and this limits the use of the wood to smaller pieces of furniture and parquet blocks for flooring. If accessions developing large and straight boles would be available, Burkea africana might be interesting for cultivation as a timber tree because it yields high-quality timber. Research on silvicultural aspects would be required, as well as on propagation techniques and growth rates.

Burkea africana is a true multi-purpose tree, not only important for its timber but also as a source of medicine, firewood, dye and edible caterpillars, whereas its popularity as an ornamental tree is rising. As an important and widely used medicinal plant, it deserves more research on its active compounds, some of which have already shown interesting pharmacological activities.

Protection measures and domestication should be considered with a view to attain sustainable exploitation of this important African tree, which is being depleted at a quite high rate.