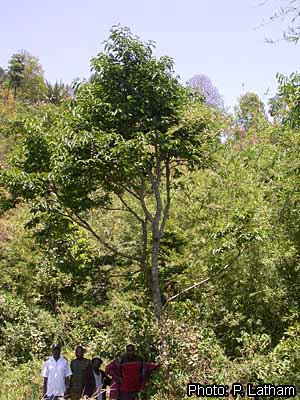 Bridelia micrantha is widely spread throughout mainland tropical Africa with the exception of a number of countries with very low annual rainfall. It has been introduced in Réunion, probably because of its medicinal properties, and has become naturalized there.

The leaves are fed to cattle. They are a favourite food of the wild silkworm (Anaphe spp.), and silk and edible caterpillars are collected from wild stands as well as from semi-domesticated plants. The fruits are sweetish and edible, and in East Africa the Maasai people use the fruits to flavour milk. In West Africa the bark is added to palm wine to improve the taste. Bridelia micrantha is planted in agroforestry systems to provide shade and mulch, and it is sometimes used for hedges. In South Africa it has been planted to restore and stabilize irrigation canals on sugarcane farms. It is planted as an ornamental and especially recommended where waterlogging is a problem. In the Sahel region, a decoction of the leaves and young branches is used as a black dye for pottery, and in Tanzania a red dye is extracted from the bark. Bark, leaves and roots have medicinal applications throughout the range of Bridelia micrantha. The bark is widely used in the treatment of wounds, and as a purgative, abortifacient and aphrodisiac, whereas in Congo bark decoctions are taken to treat cough and sore throat. In South Africa the bark is used as a remedy for headache, sore joints, sore eyes, stomach-ache, diarrhoea, tapeworms, venereal diseases and fever.The leaves are used as a laxative and chewed against headache. In Tanzania the roots are used to treat symptoms of non-insulin dependent diabetes mellitus such as excessive thirst and urine production, and sweating. In Côte d’Ivoire leaf and root extracts are applied as anthelmintic and to treat malaria and trypanosomiasis. In DR Congo the inner bark is used in the preparation of arrow poison.

The heartwood is pale to dark brown and clearly to poorly demarcated from the greyish or yellowish white sapwood. The grain is straight to interlocked, texture fine and uneven.

The wood saws fairly easy, planes well and takes a good polish. It holds nails and screws well, glues well, and makes good joints. The wood is durable even when exposed to the soil or water, being quite resistant to fungi and all kinds of insect attacks including termites, but the sapwood is susceptible to Lyctus attack. It is an excellent firewood and produces a good-quality charcoal.

Tannins isolated from the bark showed antibacterial activity, and aqueous bark extracts showed anti-inflammatory effect. Methanolic and aqueous extracts of roots and stem bark of Bridelia micrantha were shown to have strong activity against HIV-1 reverse transcriptase and integrase. Methanolic bark extracts showed in-vitro inhibition of a wide range of gram-positive and gram-negative bacteria. Extracts of the roots had the same effect but only at higher concentrations. Compounds isolated and possibly responsible for the antibacterial activity are friedelin, taraxerone, epifriedelinol, taraxerol and the tannins gallic acid, ellagic acid and caffeic acid.

The wood resembles that of Lovoa trichilioides Harms. The timber of Bridelia micrantha shares its trade name with that of Bridelia grandis Pierre ex Hutch. and the timber of both species is mixed in trade.

Bridelia occurs in the Old World tropics, and comprises about 75 species. About 15 species occur in mainland tropical Africa and 2 species are endemic to the Indian Ocean islands.

Bridelia ndellensis Beille is a small tree up to 15(–20) m tall with bole up to 30 cm in diameter, distributed from southern Nigeria eastward to Sudan and Uganda. Its wood is whitish and hard, and used in DR Congo for house building. In Sudan the fruits are eaten. In DR Congo a bark maceration is taken as a remedy for cough and diarrhoea.

Under favourable conditions when planted in deep and moist soils, growth of seedlings is fast, up to 2 m per year. Bridelia micrantha already produces considerable shade and may start flowering 3 years after sowing. Flowering takes place during the dry season. Reportedly, trees do not fruit every year. Fruits are dispersed by numerous animals, including civet, rodents and probably birds. Roots may produce suckers when they are injured.

Bridelia micrantha is found in a variety of habitats, from savanna and woodland to seasonally flooded grassland, riverine forest, swamp forest and the margins of mangrove swamps, from sea-level in West Africa to 1750(–2500) m altitude in East Africa. It is a pioneer that tolerates a wide diversity of soils. It withstands moderate frost.

Sowing fresh seed is the easiest way to propagate Bridelia micrantha. The oily seeds lose their viability quickly and storing seed for longer periods is difficult. Wildlings are also collected for planting. In Uganda cuttings have been successfully used to establish plantations. For good early growth, weeding is necessary after planting.

Bridelia micrantha can be pollarded, pruned and coppiced, and a 30 year coppicing rotation has been proposed. In small farms in Tanzania, it is commonly intercropped and pollarded in short rotations to reduce shade from the crowns. In Nigeria and Uganda pure stands have been established for the production of silkworms.

In Ethiopia Bridelia micrantha has become scarce as a result of overexploitation for its termite-resistant wood. In Kenya the intensive use has had the same effect and probably populations are under pressure in many other regions. To have continued access to sizeable timber, protective measures and domestication are needed.

There will be continued demand for the wood of Bridelia micrantha for applications where durability is demanded. The isolation and the structural elucidation of the active constituents of Bridelia micrantha will provide useful leads in the development of antibiotics with β-lactamase inhibitory activity. Resistance of bacteria to this type of antibiotics is rare. For the production of silk the prospects are good. Research into domestication and management practices is important for all applications.