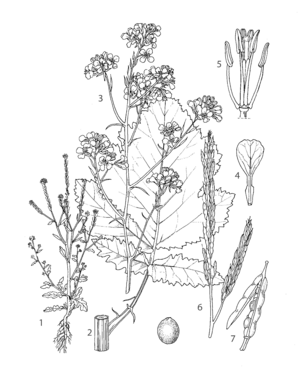 B. nigra most probably originated in the Asia Minor-Iran area, but at present it occurs wild in the Mediterranean region, throughout central Europe, in the Middle East and in the Ethiopian highlands. It is also cultivated in these areas, mainly in kitchen gardens, sometimes mixed with other Brassica oilseeds. Its shattering fruits make it unsuitable for large-scale, mechanized cultivation, so it has largely been substituted by brown or Indian mustard (B. juncea (L.) Czernjaew), which is produced large-scale on the Canadian prairies.

The seed of B. nigra has been used as a spice and medicine since ancient times in the Middle East, India and Greece. Finely ground seeds of black mustard provide mustard meal, a neutral odourless powder which stores well if kept dry. This meal, mixed with vinegar, is the pungent condiment or table mustard known as French and English mustard. Adding vinegar to a coarsely ground mixture of seeds of black mustard and of white mustard (Sinapis alba L.) produces the milder German or Dutch mustard. In Europe and North America, condiment mustard used to be prepared in the home by rolling a metal ball in a bowl of mustard seed and then mixing vinegar into the resulting crushed seed. Other herbs may be added according to taste and tradition and, for a milder taste, sugar, honey or starchy substances. There are numerous manufacturers' recipes. In cooking, mustard is mainly used to flavour meat dishes and sauces for meat, fish, salads, and snacks. In mayonnaise preparation it is also added as an emulsion stabilizer. The regulatory status of black mustard in the United States is "generally recognized as safe" (GRAS 2760).

In traditional medicine, mustard meal mixed with water was used extensively as a plaster preparation and to prepare mustard baths to treat skin ailments, arthritis and rheumatism. The seeds are used as diaphoretic, diuretic, emetic, expectorant, irritant and stimulant. Tea prepared from the seed is used to cure sore throat and to relieve bronchitis and rheumatism. Hot water poured on crushed seed makes a household remedy for headaches and colds and a stimulating foot bath. Mustard oil is said to stimulate hair growth.

B. nigra is a copious nectar producer and yields a mild-flavoured, light-coloured honey.

In world trade, the combined mustards are by far the most important spice in volume, while in value they are second only to black pepper (Piper nigrum L.). Seeds of B. juncea and S. alba account for respectively about 40% and 60% of the world mustard trade. The importance of B. nigra in international trade has become minimal.

Cruciferous plants are characterized by a range of glucosinolates or mustard-oil glucosides contained in the seeds and other tissues. Also occurring in the tissues is the enzyme myrosinase, which, in the presence of watery substances, splits glucosinolates into volatile or oily isothiocyanates and glucose. The glucosinolate of black mustard, called sinigrin, releases the aggressive, volatile allyl isothiocyanate which is responsible for the pungent taste of black mustard; it is also a strong irritant of the mucous membranes and skin, and is used in dog and cat repellents.

The glucosinolate content of the seed varies from 110-140 μmol/g. Per 100 g edible portion seeds contain: water 8 g, protein 29 g, fat 28 g, carbohydrates 19 g, fibre 11 g and ash 5 g (Ca 0.4 g, P 0.6 g, Fe 21 mg), β-carotene equivalent 0.6 g, thiamine 0.4 mg, riboflavin 0.31 mg, and niacin 7.3 mg. Since the whole seed is used, condiment mustard is in fact quite a complete and nutritious food. The many medicinal properties should therefore not always solely be attributed to the quite overwhelming action of the isothiocyanates.

Brown mustard (B. juncea) has largely taken the place of B. nigra for the production of condiment mustard. B. juncea (2n = 36) is an allotetraploid species containing the BB genome of B. nigra in addition to the AA genome of B. rapa L.; it also produces the glucosinolate sinigrin characteristic of B. nigra. However, in Asia B. juncea is most important as a vegetable and oilseed crop.

Black mustard germinates immediately after sowing; the first leaves are usually visible within 48 hours. Early growth is very rapid too. Flower initiation may start as early as 2 weeks after germination, but usually occurs after 4-6 weeks. Fruit maturation takes another 4-8 weeks. Pollination is by insects, e.g. various bee species and pollen beetles such as Meligethes spp.

Natural selection for earliness amongst volunteer plants may cause black mustard to develop as a troublesome weed.

There is some confusion in the literature about mustards. Botanically 4 species are involved:

Black mustard is adapted to a range of temperate and subtropical climates, but is unsuited to wet tropical lowlands. It tolerates annual rainfall of 300-1700 mm, but is grown chiefly as a rainfed crop in areas of low to moderate rainfall. The reported range of average annual temperatures is 6-27 °C. While suited to many soils except heavy clays, black mustard grows best on light sandy loams of pH 5-8.

Black mustard is propagated by seed. The small seed requires a level, well-prepared seedbed. Seeds may be sown about 1 cm deep in rows 20-30 cm apart at a rate of 3-4 kg/ha, or broadcast at a rate of about 10 kg/ha.

Weeding is recommended during crop establishment, as is the application of some nitrogenous fertilizer at planting.

The crop is ready for harvesting 40-100 days after sowing. Fruit ripening of black mustard starts at the base of the plants and proceeds upwards. The crop should be cut manually or by combine harvester when the first fruits mature and split. The plants should preferably be bunched and put to dry on a floor. This ensures that most seeds will be collected and that there will be no large-scale seed losses in the field and subsequent massive growth of volunteer plants causing a weed problem.

When thoroughly dry the bunched plants are easy to thresh. The seed is put in sacks together with some husks. This keeps the relative humidity down, which is important for controlling storage insects. The seed stores well.

Germplasm collections are available at the national gene banks of India, the United States, Canada and the Netherlands.

B. nigra is cross-fertilizing. It requires a recurrent population improvement breeding scheme to develop populations with improved ecological adaptation but keeping a broad genetic variation for further improvement. However, there do not seem to be any ongoing breeding programmes.

World consumption of mustard is expanding slowly and the present production centres will be able to gradually increase supplies. B. nigra will remain of minor importance. Prospects for production in South-East Asia seem limited to areas with a cool season with long days.