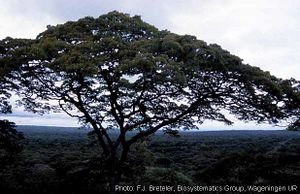 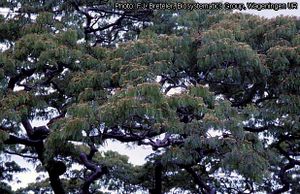 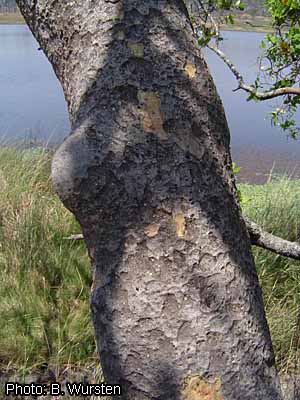 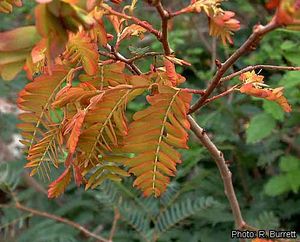 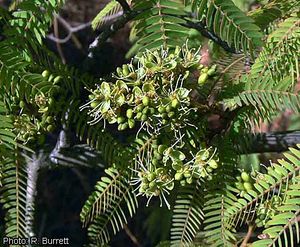 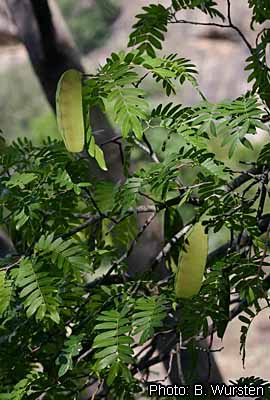 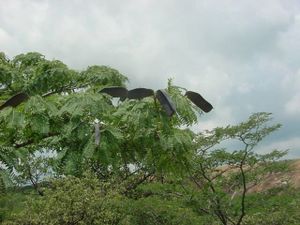 The wood is locally used in house building, e.g. for flooring joist and lintels, in wagon construction, and for mine props. It is suitable for joinery, interior trim, ship building, vehicle bodies, furniture, railway sleepers (if treated), toys, novelties, turnery, veneer and plywood. It is considered an excellent source of firewood; it is in demand by farmers for curing tobacco. The wood is also important for charcoal production.

The inner bark is a source of fibre used for ropes, sacks, cloths, mats, bags, hats, bins and handicrafts. The bark is chewed to treat constipation and as anthelmintic. The foliage is browsed by livestock such as cattle and goats.

The wood of Brachystegia tamarindoides is locally used and has no importance on the international timber market.

The heartwood is greyish brown to reddish brown or dark brown and is distinctly demarcated from the yellowish white, up to 10 cm wide sapwood. The grain is interlocked, texture moderately coarse to coarse. Quarter-sawn surfaces show a nice figure.

The wood is medium-weight to fairly heavy, with a density of 770–880 kg/m³ at 12% moisture content. It air dries slowly; boards of 2.5 cm thick take about 9 weeks to dry from green to air dry, with moderately severe distortion and sometimes surface checking and end splitting. The rates of shrinkage during drying are medium, from green to 12% moisture content 2.1% radial and 2.8% tangential. At 12% moisture content, the modulus of rupture is about 88 N/mm², modulus of elasticity 10,500 N/mm², compression parallel to grain 67 N/mm², shear 15 N/mm² and Janka side hardness 6450 N.

Sawing may give some difficulties because the wood has a tendency to char and splinter. Surfaces may be rough due to the interlocked grain; in planing, a reduced cutting angle to 10° is recommended. The wood has a tendency to split upon nailing, and therefore pre-boring is advised. It mortises and drills well if it is supported. The heartwood is moderately durable, being susceptible to insect attack. The sapwood is liable to attacks by blue-stain fungi and Lyctus borers. The heartwood is resistant to impregnation with preservatives, the sapwood moderately resistant.

The amount of tannin in the bark varies greatly, from 8% to 25%.

Brachystegia is a taxonomically difficult genus comprising about 30 species, distributed in mainland tropical Africa and South Africa, the majority of species occurring in southern tropical Africa, where they are characteristic of miombo woodland.

Two years after germination, seedlings had a mean height of only 25 cm. In plantations in Burundi, trees reached a height of 7–8 m 11 years after planting. Trees are leafless in the dry season, usually in August–September. They flower in September–October and fruits ripen in April–September. When ripe, the fruits split open explosively, dispersing the seeds over some distance. The roots are associated with ectomycorrhizal fungi.

Brachystegia tamarindoides is most common in deciduous woodland on rocky hills and escarpments, at 800–2000 m altitude. It occurs on granite soils and leached reddish soils, often in localities with thin but humus-rich soils. It is quite drought tolerant

The foliage is often attacked by caterpillars of the saturniid moth Imbrasia epimethea; these caterpillars are edible.

People typically collect branches and stems with a diameter of 3–8 cm as firewood for household fires. For use in construction and charcoal production, thicker stems and branches are collected. Big and tender shoots of young trees are often cut to extract fibre. Harvesting for all these purposes is done throughout the year.

After felling, logs should not be left for longer periods in the field because the wood is susceptible to insect attacks; they should be processed rapidly or treated with preservatives. Extracted fibre is often boiled together with ash for colouring, followed by drying. Subsequently the fibre is pressed to soften it and then spun into strands or strings.

Together with some other Brachystegia spp. from the miombo woodland, Brachystegia tamarindoides is important for local people as a source of timber, firewood, charcoal and fibre. Planting programmes have locally been initiated to counterbalance high levels of exploitation and forest degradation. More research is needed on growth rates, propagation, silvicultural methods and harvesting techniques to arrive at appropriate recommendations for sustainable forest management.