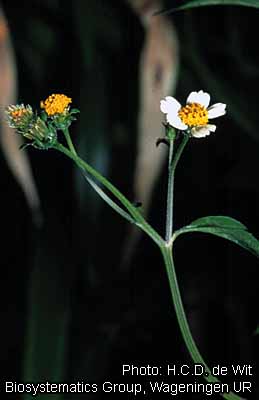 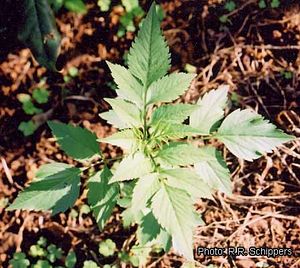 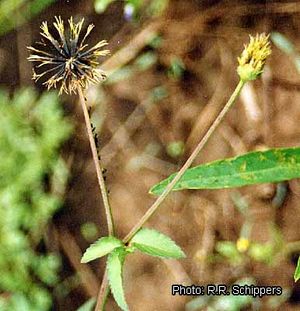 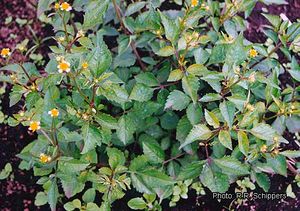 Bidens pilosa is a cosmopolitan weed, originating from South America and common in all tropical and subtropical areas of the world. In Africa Bidens pilosa is recorded as a weed in many countries and it is likely to occur in all countries, including the Indian Ocean islands. It is reported as a vegetable or potherb among others in Sierra Leone, Liberia, Côte d’ Ivoire, Benin, Nigeria, Cameroon, DR Congo, Kenya, Uganda, Tanzania, Malawi, Botswana, Zambia, Zimbabwe and Mozambique.

In sub-Saharan Africa, the fresh or dried tender shoots and young leaves are used as a leaf vegetable especially in times of food scarcity. It is an ingredient of sauces accompanying the staple food. The leaves are, fresh or after parboiling, dried in the sun and stored as powder for the dry season. In Uganda, the leaves are boiled in sour milk. Old leaves are not suitable for consumption because they have a bitter astringent taste.

Bidens pilosa is used as a medicinal plant in many regions of Africa, Asia and tropical America. Roots, leaves and seed have been reported to possess antibacterial, antidysenteric, anti-inflammatory, antimicrobial, antimalarial, diuretic, hepato-protective and hypotensive activities. In Uganda, five different medicinal uses are known: the sap from crushed leaves is used to speed up clotting of blood in fresh wounds; a leaf decoction is used for treating headache; sap from the plant is put in the ear to treat ear infection; a decoction of leaf powder is used to treat kidney problems; and a herbal tea made from the plant decreases flatulence. Extracts of Bidens pilosa are used in southern Africa to cure malaria. The Manyika people in the eastern highlands of Zimbabwe retain the first water used for cooking Bidens pilosa foliage for later use as a medicinal drink to cure stomach and mouth ulcers, diarrhoea, headaches and hangover. The Zulu in South Africa use a suspension of powdered leaves as an enema for abdominal trouble, whereas in Congo a concoction made from the whole plant is taken as a poison antidote, or to ease child delivery and to relieve the pain from hernia. In South Africa, strong decoctions of the leaf taken in large doses have been reported to be helpful in treating arthritis. In Côte d’Ivoire, the plant is used for treating jaundice and dysentery. The plant sap is applied to burns in Tanzania. In Nigeria, the powder or ash from the seed is used as a local anaesthetic and rubbed into cuts. The Giriama tribe from the coastal areas of Kenya use a leaf extract to treat swollen spleens in children. This tribe also uses a mixture of the dried and ground leaves of Bidens pilosa, soap and hot pepper as an insecticide for the control of leaf miners and other insects.

In Nanyuki, Kenya, Bidens pilosa is collected for the extraction of natural dyes. Among the Efe of the DR Congo the root is washed and dried, then used as a painting brush. Livestock browses on the plants and in South Africa Bidens pilosa has been used as a fodder for pigs. However, dairy cattle are discouraged from browsing on it because the aromatic oil present in the plant has an objectionable smell that can taint milk. Chicken feed on the seed. In Uganda and in Mexico, the leaves are used as an invigorating or stimulant substitute for tea; while in the Philippines the flowers are used in the preparation of a kind of wine. The flowers are a good source of nectar for honeybees.

Black jack as a vegetable and medicinal plant is frequently found in small quantities on local markets. The young plants or leaves and shoots are collected from the wild or from the field during weeding. In southern African countries it is usually found on the markets early during the rainy season when other fresh vegetables are scarce. Dried black jack leaves are especially important during periods of food scarcity in the dry season. Small-scale cultivation has been reported from Nigeria, Benin and Zimbabwe. There are no statistics on the total area under cultivation and the volumes traded. International trade has not been recorded.

Extracts of Bidens pilosa show antimalarial activity both in vitro and in vivo. The crude ethanol extract (50 μg/ml) causes up to 90% inhibition of Plasmodium falciparum growth in vitro, compared with 86–94% inhibition for the chloroform fraction and 68–79% for the butanol fraction (both at 50 μg/ml). In vivo the crude ethanol extract and the chloroform fraction cause about 40% reduction of Plasmodium berghei parasitaemia in mice. Phenylacetylenes and flavonoids have been found in the ethanol extract from the leaves and the roots. The major component of the chloroform fractions from the roots was the phenylacetylene 1-phenylhepta-1,3-diyne-5-en-7-ol-acetate. The results indicate that the antimalarial activity of Bidens pilosa may be attributed to the presence of acetylene compounds. The direct therapeutic usefulness of these compounds seems limited, since they are easily oxidized by air and light.

Polyacetylenes also have antimicrobial activity. A number of polyacetylenes, e.g. phenylhepta-1,3,5-triyne from petroleum ether and methanol/water extracts of Bidens pilosa are toxic to yeasts and some bacteria. This compound is an active antiparasitic and exhibited marked insecticidal activity with LC50 of 204 ng/cm2 for the first instar larvae of the fall army worm (Spodoptera frugiperda).

The polyacetylene 7-phenylhepta-2,4,6-triyne in combination with light is reported to be phytotoxic to fibroblast cells. Consumption of the leaves, as in South Africa, has been found to promote the development of oesophageal cancer, and dried leaves of Bidens pilosa have a co-carcinogenic action for oesophageal tumours induced in rats.

In addition to the acetylenes, other compounds such as phytosterols (β-sitosterol), triterpenes (friedelin and friedelan-3β-ol) and caffeic acid(s) are also reported from Bidens pilosa. The main flavonoids from leaf extracts are aurones and chalcones. Since friedelin and friedelan-3β-ol, as well as several flavonoids have anti-inflammatory properties, their detection in extracts from Bidens pilosa, together with the presence of the described acetylenes, may explain the use of Bidens pilosa in traditional medicine, especially for treating wounds, against inflammations and against bacterial infections of the gastrointestinal tract.

The ethanolic extract of Bidens pilosa showed a high inhibition of prostaglandin synthesis in an in vitro assay for cyclo-oxygenase inhibitors. The methanol extract showed radio-protective activity for bone marrow. Besides the above-mentioned pharmacological activity, antihyperglycaemic, immunomodulator, anti-ulcer and hypotensive activity are reported.

Bidens bipinnata L., also called Spanish needles or black jack, is used as a substitute for Bidens pilosa. It differs by its bipinnatisect leaves.

Bidens, with its over 200 species, belongs to the tribe Heliantheae and is closely related to Coreopsis, with which some authors advocate uniting it. The taxonomy of Bidens is still unsatisfactory.

Bidens pilosa plants grow fast; flowering starts 6 weeks after emergence and continues until plant senescence 2–3 months later. Black jack is self-fertile but probably partly cross-pollinated by insects. The first seed is mature 4 weeks after flowering. Each plant bears at least 80 flower heads with a potential production of 3000 plants in a single generation and 4 generations per year. Seed harvested from central achenes has a higher germination rate than that harvested from the peripheral achenes. The fruits have tiny barbed hooks that enable them to readily stick on clothes and the coats of passing animals as a means of dispersal. Flowing water can also disperse the fruits.

Black jack grows freely in disturbed places, or as a weed in crops such as cereals, pulses and cotton, in sunny or slightly shaded places, from sea level up to 2400 m altitude. The optimum temperature for germination is 25–30°C. Temperatures below 15°C and above 45°C are not favourable. It thrives in soils with a pH ranging from 4–9 and can tolerate a very high salinity, up to 100 mM NaCl. Flooding reduces seed emergence.

Bidens pilosa is only sexually propagated. The weight of 1000 seeds (fruits) is about 1.4 g. The seed has no dormancy and germinates within 3–4 days in moist upper soil. Harvested fruits form large balls, which are difficult to disentangle, but after drying and storing for over three weeks, the barbed hooks break off easily. Dry seed is tough and remains viable for at least three years. The emergence is good when seed is buried not more than 4 cm in the soil. The seed will not germinate if buried at more than 6 cm. Soaking of the seed in water increases germination.

Bidens pilosa is a weed in both field and plantation crops and is recorded as troublesome in about 30 crops in more than 40 countries, including about 20 African countries. It is considered one of the most noxious annual weeds in East Africa. It often becomes dominant after the eradication of perennial grasses, and displays allelopathic effects on a number of crops.

Black jack is a semi-cultivated plant in compounds where selective weeding is applied. Cultivation is easy. The seed is sown broadcast or in rows and the seedlings thinned out to 10–15 cm. As a vegetable, the plants are ready for harvesting within 4–6 weeks of emergence, before seed setting. There may be 4 or 5 successive plantings within a year. If black jack is grown for harvesting the leaves as antimalaria medicine, deflowering is necessary to retard senescence and maintain growth.

Very few records of pests and diseases have been recorded on this plant. In Nigeria the following were observed: a virus causing greyish-green and lumpy leaves, plants remaining small and flowering early; Cercospora bidentis leaf spot; leaf miners in older leaves; larvae of the moth Perigea pauperata, 20–30 mm long and pale greenish with a yellow head, sheltering in leaves bound together.

In cultivation, the first harvest is 4–6 weeks after sowing, when the plants are 15–30 cm high. Harvesting is done by hand picking, cutting or uprooting. If the plants are topped, a second harvest can follow after 2 weeks. Up to 6 harvests are possible.

Tender leaves, shoots or whole young plants are washed and tied into bundles, after which they may be taken to the market. Although they are not as perishable as most leafy vegetables, the leaves intended for marketing are harvested late during the day or early in the morning so that they remain fresh for marketing. Leaves may also be parboiled and then dried in the sun for later use. Leaves, stems, roots and seed intended for medicinal purposes do not require any delicate handling.

In view of its widespread distribution and weedy nature, Bidens pilosa is not at risk of genetic erosion. Its wide variability in morphology and cytology indicates much genetic variation, which warrants more research.

There does not appear to be a high need for commercial cultivation of black jack because it occurs abundantly as a weed. Cultivation might even promote its spread as a weed. The traditional application of Bidens pilosa in local medicine, especially for its antiseptic and anti-inflammatory properties, will remain of importance, the more so as the plants are readily available. The immunomodulatory, anti-inflammatory and especially antimalarial properties deserve further attention.