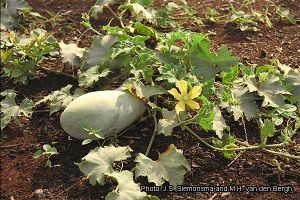 plant habit with flower and fruit 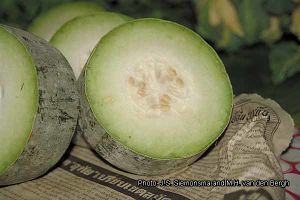 halved fruits on the market 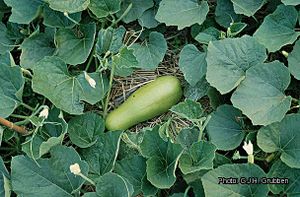 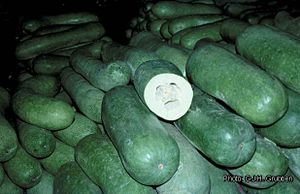 young fruits on the market

Wax gourd is a cultigen probably originating from Indo-China. It is not found in the wild and no related species are known. It has been grown since ancient times in southern China, Japan, and southern and south-eastern Asia. Wax gourd is now widely cultivated throughout tropical Asia and is also rather popular in the Caribbean and the United States. In Africa it is a vegetable crop of limited importance, grown mainly in East and southern Africa. In Madagascar and Mauritius it was formerly cultivated, but it seems to have vanished at present.

Wax gourd is grown both for its immature and mature fruits. The immature fruits, called fuzzy melons, have a delicate taste and flavour and are prepared in the same way as summer squash from Cucurbita pepo L. In India they are used extensively in curries. The ripe fruits have juicy greenish-white flesh with a flat taste. They are especially popular among people of Asian descent, but they are also liked by many Africans. The skin is peeled or scraped off, seeds and pith are removed, and the flesh is cooked in soups. In China the fruits are often stuffed with meat, shrimps and vegetables and then steamed in a pot. The firm flesh of the older fruits is also candied with sugar and can be dried for later use. Young shoots, leaves and flowers are occasionally eaten too. The seeds are prepared as a snack food by frying. In India, the wax of the fruits was formerly scraped off to make candles. Wax gourd is sometimes used as a rootstock for melon (Cucumis melo L.). The fruits are valued for their medicinal properties. In India and China they are used as an anthelmintic, antiperiodic, aphrodisiac, for lowering blood sugar, against epilepsy, insanity and other nervous diseases, haemophysis and haemorrhage, and as a diuretic, laxative and bitter tonic. They are recommended in Ayurvedic medicine for the management of peptic ulcers. The seeds are used as a vermifuge.

Wax gourd is a rather important market vegetable in subtropical and tropical Asia, and the immature fruits are increasingly popular in city markets. In Africa wax gourd is grown occasionally for local and city markets; in peri-urban gardens more for the young fruits, in rural areas more for the mature ones. There are no known statistical data.

Fruit extracts of wax gourd showed anti-ulcer activity in tests with mice and rats. Fruit juice also showed significant activity against symptoms of morphine withdrawal in tests with mice. Histamine-release inhibitors were isolated from wax gourd fruits; the triterpenes alnusenol and multiflorenol were the most active inhibitors. An immuno-potentiator has been isolated from the seeds, markedly stimulating the proliferation and differentiation of murine B cells. Wax gourd fruits contain cucurbitacin B, which is known to exhibit cytotoxic and anti-inflammatory activities.

Benincasa comprises a single species. Numerous types are distinguished, mainly differing from each other in fruit size and shape, colour, hairiness and amount of wax present. A classification into 16 cultivar-groups has been proposed, but the main distinction in improved cultivars is between types suitable for harvest of the young fruits, the ‘fuzzy melon’ type, and cultivars grown for the mature gourds, the true ‘wax gourd’ type. From some landraces in India both the young and mature fruits are used.

Wax gourd is a vigorous grower, but it needs a long growing season of 4–5 months. Flowering starts about 45 days after sowing for early types and up to over 100 days after sowing for late ones. The flowers are insect-pollinated. Sex ratio is 1 female flower to 20–33 male ones in primitive types, but modern selections and hybrids are predominantly female. The ratio of female to male flowers increases with lower temperatures and with shorter days. Young fruits are harvestable 8 days after anthesis or later, depending on the size wanted by the market. The fruits need 1–2 months from anthesis until full maturity, 50–72 days in modern improved cultivars. A regular harvest of young fruits prolongs the flowering period and the crop duration. Fruits contain 15–45 g of seed.

Wax gourd is best suited for moderately dry areas in the tropics. It is relatively drought tolerant. It grows well at temperatures above 25ºC, the optimum temperature for growth ranging from 23–28ºC (24 h average). It is suited to tropical lowland conditions and elevations up to 1000 m altitude. It prefers a well-drained light soil with pH 6.0–7.0.

Both direct-seeding and sowing in pots and transplanting is practised if grown for immature fruits, whereas for the production of mature wax gourd fruits only direct sowing is practised. Direct sowing is done in trenches or planting holes filled with manure or compost. When grown trellised for young fruits, plants are spaced at 50–70 cm in the row, with the rows 1.5–2.0 m apart or about 10,000 plants/ha, when grown for mature fruits and stems allowed to trail there are about 5000 plants/ha. In intensive growing systems for immature fruits, the seed requirement is 400–500 g/ha if transplanting is practised and 800–1000 g/ha for direct sowing. One gram contains 12–25 seeds. Farmers who produce farm-saved seed usually use up to 2 kg/ha. For wax gourd in India farmers use a seed rate of about 5 kg/ha.

Wax gourd grown for mature fruits is planted on flat land, whereas the fuzzy melon type is mostly grown upright, e.g. against trellises. It needs a fertile soil and responds well to much organic matter, e.g. 30 t manure per ha. An application of NPK fertilizer is recommended before sowing and a nitrogenous fertilizer as a side-dressing at regular intervals until flowering. Ample irrigation is needed during dry periods. In the rainy season, fruits of trailing plants can be protected from rotting by putting them on some straw. Pruning of stem tips and flowers is sometimes carried out to achieve better growth of fruits.

Wax gourd is moderately susceptible to anthracnose (Colletotrichum lagenarium) and gummy stem blight (Didymella bryoniae), for which no tolerance has been identified yet. It is also moderately susceptible to fruit rot (Fusarium solani) and cavity rot (Verticillium dahliae) but rather resistant to leaf fungi that are devastating on other cucurbits such as downy mildew (Pseudoperonospora cubensis) and powdery mildew (Erysiphe cichoracearum and Sphaerotheca fuliginea). Wax gourd is susceptible to watermelon mosaic virus (WMV) transmitted by aphids. Among the insect pests are squash beetle (Aulacophora foveicollis), aphids (Aphis gossypii) and fruit flies (Dacus spp.). These pests and diseases are seldom serious enough to justify chemical sprays.

Young fruits are rather perishable. Mature fruits can be stored for over a year if kept at 13–15°C and 75% relative humidity due to the waxy layer that protects them from attack by micro-organisms.

Although at present of little importance in tropical Africa, wax gourd merits attention as an easy-to-grow vegetable suitable for home gardens and market production, with immature fruits having a good taste and mature fruits having excellent keeping quality.