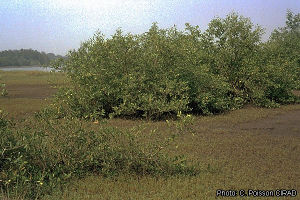 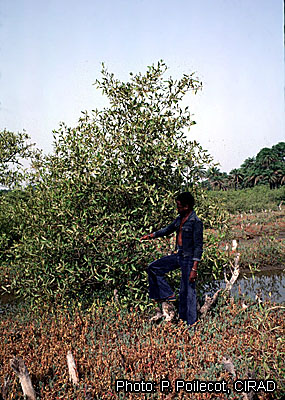 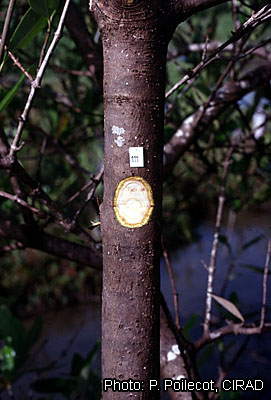 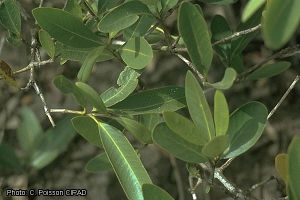 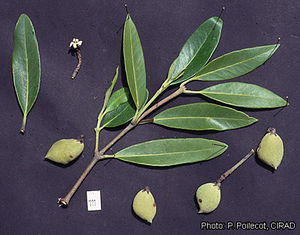 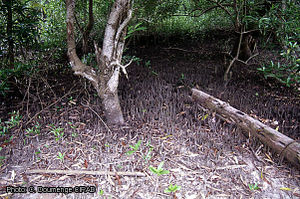 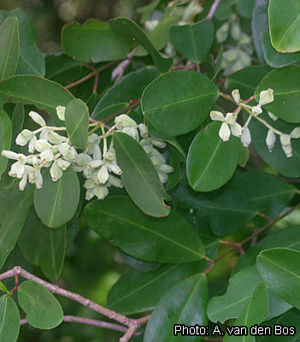 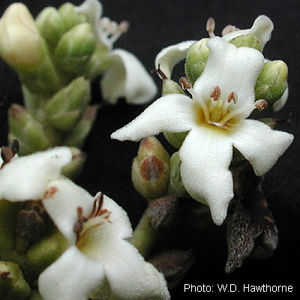 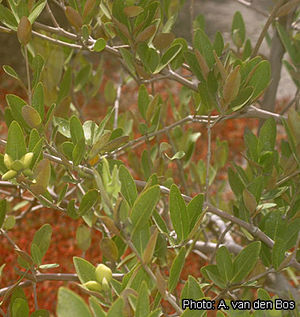 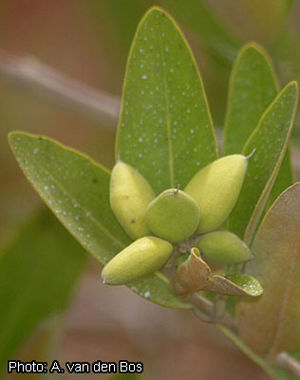 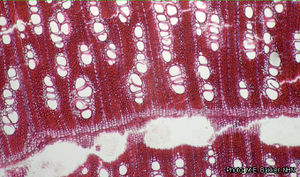 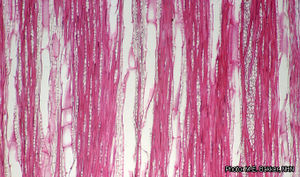 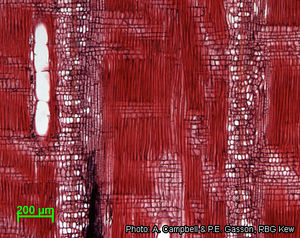 Avicennia germinans is found along the Atlantic Ocean, in tropical Africa from Mauritania to Angola. It is widespread along the coasts of Central and South America and the Caribbean region, occurring from the southern United States to Brazil along the Atlantic coast and to Peru along the Pacific coast.

The wood is used for marine construction, boat construction (especially ribs), wharves, piles, house building, furniture and implements. It is suitable for heavy flooring, mine props, railway sleepers, joinery, vehicle bodies, handles, ladders, toys, novelties and carving. The wood is also used as firewood and for charcoal production. It is commonly used for smoking fish.

The cotyledons of the seed are eaten during famines, but only after careful preparation to remove toxic compounds. The leaves and roots are used to prepare a vegetable salt. The bark has been used for tanning and for dyeing reddish colours. Ash is added to water as a soap substitute. Smoke from the wood is reported to dispel mosquitoes effectively. The flowers are a source of nectar for honey bees.

The powdered bark made into a paste is applied to skin complaints and to dispel fleas and lice. Decoctions of bark and leafy twigs are taken or added to a bath to promote childbirth. The leaves are applied as an enema to treat piles. A root decoction is taken to treat intestinal problems. In tropical America the bark resin is used in traditional medicine to treat tumours, diarrhoea, haemorrhage, haemorrhoids, rheumatism, swellings, wounds and sore throat.

The heartwood is pale brown to pinkish brown, darkening upon exposure, and rather indistinctly demarcated from the whitish sapwood. The grain is often interlocked, texture fine.

The wood is heavy, with a density of about 950 kg/m³ at 12% moisture content. It is difficult to air dry, being liable to twisting and checking. The rates of shrinkage are high, from green to oven dry about 7.1% radial and 10.2% tangential. Once dry, it is stable in service. The wood is difficult to split radially, but not tangentially. It saws satisfactorily, but is difficult to work by hand tools. It has some tendency to split upon nailing and screwing. The wood is very durable, even under water, and resistant to termite and Lyctus attacks. It has been reported that the wood is suitable for particle board and pulp production, but for the latter purpose it should be mixed with wood of other species that have longer fibres.

Ethanol solutions of smoke from burning Avicennia germinans wood inhibited the growth of pathogenic bacteria and fungi, such as Escherichia coli, Staphylococcus aureus and Saccharomyces cerevisiae, which supports the usefulness of the wood for smoking fish and other foods. Moreover, the smoke significantly deterred Acraea acerata, a pest of sweet potato, from depositing eggs.

Avicennia comprises about 8 species and occurs in all tropical regions, locally extending into the subtropics; 2 species are found in tropical Africa. In the past Avicennia has been included in the family Verbenaceae, but it differs in wood and leaf anatomy and seedling and pollen morphology, and has been placed in a separate family: Avicenniaceae. In a recent molecular analysis it was nested within Acanthaceae.

In the literature, Avicennia germinans plants from Africa are sometimes distinguished from those from Central and South America as Avicennia africana P.Beauv. Although the two taxa were merged in 1963 and the African plants have since usually been called Avicennia germinans, recent phytochemical and molecular studies showed significant genetic differentiation between the African and American populations, and more elaborate biosystematic studies have been recommended. A molecular analysis showed that regional differentiation between the Pacific coast and Atlantic coast populations in America was even greater than between west and east Atlantic populations, suggesting at least some dispersal across the Atlantic Ocean, and providing no support for the treatment of the African populations as a separate species.

In experiments in Ghana, seedlings reached a height of up to 26 cm at 4 months after planting. Under optimal growing conditions, trees may grow 60 cm/year in height. The leaves excrete excess salt through pores, and salt crystals are commonly present on the leaves. The minute hairs that cover the lower surface of the leaf play a role in the water balance, but more studies are still needed to understand the exact processes. In each cluster of flowers there is often only a single open flower at a time. The flowers are protandrous and attract short-tongued insects such as bees, which receive pollen on their backs while collecting nectar. After some shrivelling of the stamens, the 2 lobes of the stigma expand, enabling pollination by insects that previously visited a flower in the male stage. The seeds start germinating while still attached to the tree, but the embryo stays within the fruit until fruit fall.

Natural regeneration is often abundant, and wildlings can be collected to serve as planting stock. Experiments with seedlings resulted in approximately 90% survival. The seedlings grow best when they are in contact with fresh water. Fruits with germinating seeds may float in salt water for one year without rooting. They are very susceptible to desiccation.

In many mangrove regions, the potential of Avicennia germinans is considered limited and other mangrove species like Rhizophora spp. are often more highly valued for timber, firewood, charcoal, dye and tannin production. Although mangroves are often heavily exploited, Avicennia germinans is often left. In Gambia a standing volume of 106 m³/ha has been recorded, corresponding to a productivity of about 3.5 m³/ha per year. In mixed Avicennia / Rhizophora mangrove the standing volume was 29 m³/ha.

The germinating seeds are often attacked by crabs and snails, and the leaves of trees can also be damaged by crabs.

Avicennia germinans is one of the most common species in mangrove vegetations, being a pioneer species with great power of natural regeneration. As such, it does not seem liable to genetic erosion. In many regions of tropical Africa, however, mangroves have been or are being converted into agricultural land, especially into rice fields, or are subject to overharvesting for timber or fuel, and this may eventually affect the genetic diversity of Avicennia germinans. Locally the populations are also threatened by petroleum production and resulting pollution, as in some areas in Nigeria.

Mangroves are socio-economically important ecosystems for the inhabitants of coastal regions, but they are under high pressure worldwide. As one of the main constituents of mangrove vegetations in Africa, Avicennia germinans deserves protection. Its role in timber production in tropical Africa should therefore be limited to local applications for heavy construction, with emphasis on sustainability. Moreover, the boles are often too small and of too poor shape to be interesting for commercial timber exploitation.